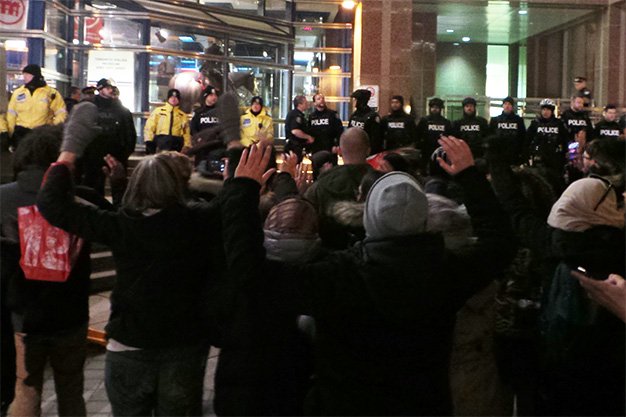 To celebrate the International Day for the Elimination of Racial Discrimination on Monday, the Toronto Police Service engaged in a physical confrontation with members and supporters of Black Lives Matter – Toronto (BLMTO).

At about 9 pm, as the camp-out to demand accountability for recent police shooting deaths of black men neared its twenty-first hour outside of police headquarters, a phalanx of officers emerged from the building. Joined by a handful of firefighters, they delivered a final message that the protesters could stay but that their three tents would have to be dismantled and their fire in a steel barrel extinguished. BLMTO resisted — the temperature was hovering near zero and they were in this for the long haul — and chanted “No justice! No peace! No racist police!” and of course “Black lives! Matter!”

Police forcibly moved in, pushing, shoving and tossing people aside to get to the tents and the fire. They broke apart the tents with relative ease and doused the fire with an imprecisely thrown bucket of water, which drenched the protesters defending it.

Their immediate objectives accomplished, the police and firefighters filed back into the building.

Shaken but resilient, protesters sang “I believe that we will win!” as plans were tentatively hatched to build a new fire. Watch:

An hour later, however, police and firefighters returned with three men in hazmat suits, who splashed the abundance of remaining kindling with a fire retardant, Angus Foam Liquid Concentrate. The uniformed officers shoved protesters some more. Take a look:

The BLMTO demonstration had originally started more than a day earlier, at 6 pm Sunday at Nathan Phillips Square, where organizers established a “mini Afrofest.” There were small booths and poetry performances on the stage.

“Now you see us,” declared a banner draped from the City Hall roof, as police horses wearing riot visors trotted on adjacent streets.

Just before 7:30, BLMTO announced an intention to stay in the square all night, changing the hashtag from #BLMTOblackout to #BLMTOtentcity. 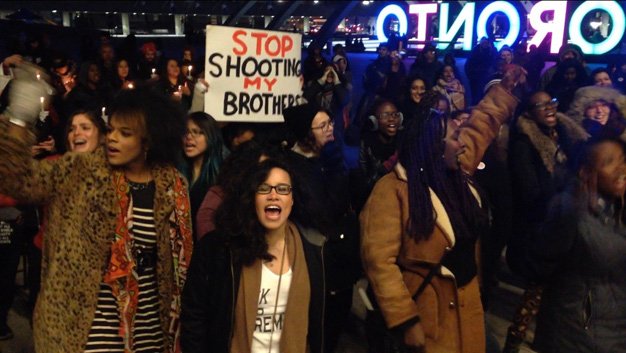 Police threatened to charge them with trespassing, but the group initially refused to go anywhere, according to BLMTO steering committee member Yusra Khogali. Only at midnight, when police “escalated their tactics to bring on horses and court services vans,” did they decide to relocate.

“We wanted to protect our community because we recognize that black people are susceptible to violence, so we moved from Nathan Phillips to here,” she said the next afternoon.

NOW was present at about 3 am Monday, when Staff Sergeant Chuck Konkel told BLMTO’s police liaison that the group could stay more or less indefinitely so long as they kept the area clean.

“With the fire pit, just make sure you keep it from flaming on to anything that could start a fire on the tents or anything,” said Konkel, a Conservative candidate in the last three federal elections. 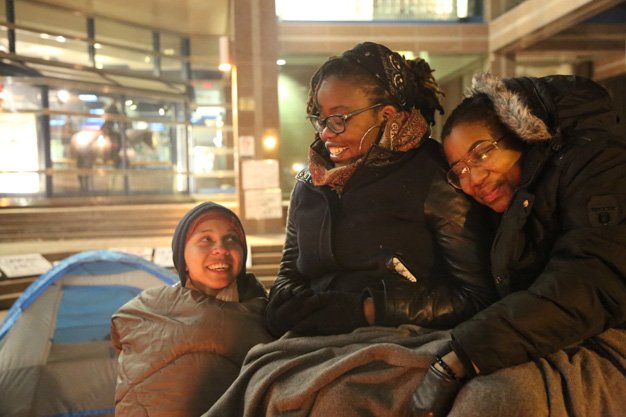 Later that morning, BLMTO put out a list of demands upon which their departure would be contingent:

By Monday afternoon, the encampment took the form of two dozens activists, three tents, several sleeping bags, a large pile of wood, and a metal drum in which to burn it. There were illustrated tributes to victims of police violence, and candles lining the steps of the building. A well-stocked snack table marked the occupation’s east boundary. 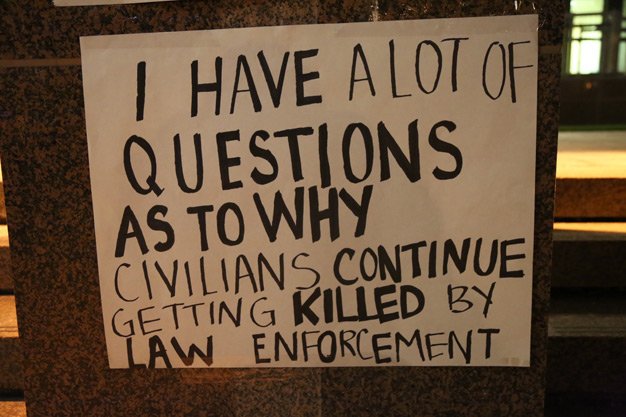 “I have a lot of questions,” read a sign affixed to a column, “about why civilians keep getting killed by law enforcement.”

“People are really energized, we’re really angry,” Khogali said at the time. “So we’re gonna be here for a while.”

With files from Zach Ruiter.