VITALS by Rosamund Small (Outside the March/Theatre Passe Muraille). At a secret location (meet at 149 Roncesvalles). Runs to June. 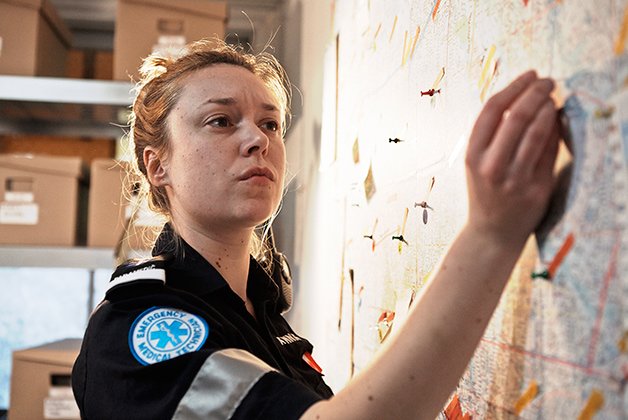 Katherine Cullen maps out her troubled characters journey in Vitals.

Watching someone crack under stress may not be pretty, but it can make for powerful theatre.

In Rosamund Small’s Vitals, we enter the world and the mind of Anna (Katherine Cullen), an EMS worker who believes she’s so efficient at her job that nothing emotional can touch her.

What makes the show even stronger is that we don’t just watch Anna but become part of her rescue team, donning blue EMS gloves. Our evening’s guides are nine silent first responders who lead us through what appears to be an ordinary house on a quiet street.

It’s not, though. The production, helmed by that sorcerer of site-specific theatre, Mitchell Cushman, immerses us in a disturbing psychic landscape. Though the building might be Anna’s home, more importantly it reflects her anxious state of mind.

Gathered in the backyard at the start, the audience of 30 finds telephone cords all over the place and watches a burn victim behind a basement window. Tchaikovsky blares from the garage.

When we meet Anna, we realize she has a sense of her own importance and the right way of doing things. We’re then led into the house, whose rooms are a dark wonderland: there are boxes of victims’ possessions, maps, red strings, medical reports suspended from the ceiling, and a kitchen that’s been invaded by the forest.

Viewers spend much of their time wandering and exploring the space, sometimes watching Anna speak the text and sometimes listening to her on headsets. The latter technique doesn’t work at first, because there’s so much going on visually in Anahita Dehbonehie’s fascinating production design that we don’t pay attention to the words.

Cullen drives the production carefully. Over the course of 90 minutes, cracks appear in her controlled surface as ongoing stress eats away at her. Her eyes become wild, her breathing on the headset panicky.

In Small’s clever, often darkly comic script, seemingly isolated incidents develop larger importance as Anna falls apart, shaking with anger. That anger makes her aware that her work can’t help but be personal, an understanding that leads her to a new kind of care-giving, one for which she’s perhaps better suited.