Vlogging the Leafs to hell and back 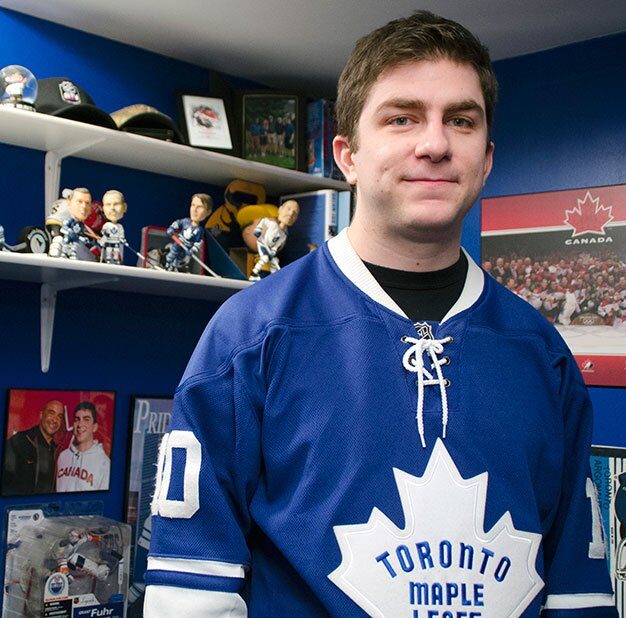 Only a few can know the disappointment of cheering for the Toronto Maple Leafs as intimately as vlogger Steve “Dangle” Glynn.

For the past seven and a half seasons – arguably some of the team’s worst – the 26-year-old Scarborough native has made a Leafs Fan Reaction YouTube video following each and every Leafs game.

That’s almost 800 videos – and a whole lot of disappointment.

Armed with a webcam and his childlike charm, Dangle has been able to turn his passion for the Leafs into a career.

Since he started shooting these quirky videos almost eight years ago, Dangle has gained tens of thousands of active Twitter followers, over 21,000 YouTube subscribers and a growing fan base that looks to him for entertainment and hockey analysis.

What started him on this quixotic journey? It was a headline in the Toronto Sun after the Leafs lost their home opener in 2007. It read: “Leafs, better luck next year.”

An incensed Dangle, then a first-year radio and television student at Ryerson University, dusted off his webcam and voiced his displeasure on YouTube.

In fact, it was his then-girlfriend and current wife Sarah-Louise Glynn who bought him the webcam that went practically unused for six months after its purchase – until the Leafs’ 4-3 season-opening loss to the Ottawa Senators.

“So that’s six months of having nothing to say,” Dangle says. “And then finally I found something to say. And then eight years’ worth of material.”

It took less than a dozen videos, he says, for his viewership to hit triple digits after BlogTO featured one of his videos.

This new-found attention spurred Dangle to take the production of his videos more seriously and professionally.

And for his efforts, he was rewarded.

By the National Hockey League (NHL) lockout of 2012-13, Dangle would cover both the 2010 World Junior Ice Hockey Championship and the 2010 Vancouver Winter Olympics for Nike, as well as gain employment with Leafs TV and CBC.

Following the Olympics, however, Dangle’s career began to cool and he started to worry that he was on the verge of becoming “a hasbeen that never was,” all while continuing to chronicle the Leafs’ disappointing work on YouTube.

“I was like, ‘how many more ways can I talk about this team sucking?’ And it looked like they were heading for another rebuild in the middle of their rebuild. Eighty-two videos a season and I wasn’t getting paid for it,” he says.

Fortuitously, the lockout provided Dangle with a “reset,” and when the NHL came back for the 2013 shortened season, so did Dangle, newly rejuvenated. And since then it’s all been “just one big blur.”

During the lockout, blogs increased in popularity, Dangle says. So when the NHL returned, there was a dearth of content and he was part of a wave of bloggers that filled that void with material directed at a new, younger audience that balked at traditional media. And he quickly saw his viewership begin to grow.

“I think I cover [hockey] the way sports should be. It’s a little too suit-and-tie formal,” he said. “You forget hockey and all sports are supposed to be fun.”

Which is exactly how one would describe his videos and articles: fun, yet slightly crazy. Although, “you kind of have to be to cheer for the Leafs.” Crazy, that is.

With his growing media image he, with high-school friend and Kiss 92.5 radio host Adam Wylde, started The Panago Pizza Steve Dangle Podcast, which attracts between 9,000 to 13,000 listeners per episode, as well as notable guests such as former MLSE president and CEO Richard Peddie.

“2014 was the best year of my life,” Dangle says, which was not only the year he started working for Sportsnet, arguably the home of hockey in Canada, in a sports-personality role but also because it was the year he married long-time girlfriend Sarah-Louise.

“My career is so important to me,” he says. But if he had to pick one highlight from last year? “It’s my wedding.”