Nymphomaniac is sometimes funny, but Lars von Trier's misogyny is a serious problem 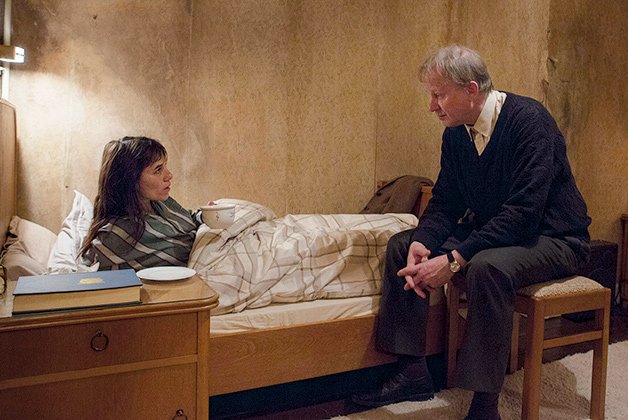 Remember Antichrist, when to eliminate Satan he felt the need to attack the clitoris? Well, he’s right back at it with two-part, four-hour sexual epic Nymphomaniac.

Joe (Charlotte Gainsbourg, in a fiercely committed performance) recounts her life’s hypersexual adventures to asexual bachelor Seligman (Stellan Skarsgård) after he finds her half dead in the street.

To every sordid tale of her wild life, he responds with stunningly cerebral detachment. Her cruising a train as a teen (Stacy Martin plays the young Joe) in competition with her friend to see who can fuck more men by the end of the line reminds him of his experience fly-fishing. Her juggling of lovers recalls the polyphony of Bach in a groan-worthy pun, he dubs her main squeeze Cantus Firmus.

Some of it, like a sequence featuring a map of Scotland, is actually very funny, though not necessarily intentionally. When Joe describes the precise number of thrusts Jerome (Shia LeBeouf, with an accent of indeterminate origin) uses to take her virginity, a thrilled Seligman exclaims, “That’s the Fibonacci sequence.”

But von Trier’s themes are too consistent (see Breaking The Waves) to categorize Nymphomaniac as one big prank.

Where does Joe’s unbridled sexuality come from? From early abuse? No, Dad (Christian Slater) is in fact a sweet nature lover, and nothing else explains her predilections except that she got interested in her clitoris when she was five and had a religious epiphany when she masturbated as a tween. In short, she kinda liked it and, poof, she was a nymphomaniac. Women are like that, doncha know.

Oh, and female desire makes for bad mothering. Joe’s so intent on getting her fix that she leaves her son unattended.

As usual, the director makes inspiring choices in music, especially Rammstein’s industrial metal. But what happened to the auteur’s genius for creating mood? There’s absolutely none here.

He’s painted as a groundbreaking taboo-buster, but self-abnegating, oversexed women who go to the depths of degradation are a pornographic staple in old-news works like The Story Of O.

Nymphomaniac sheds light on nothing except von Trier’s misogyny.