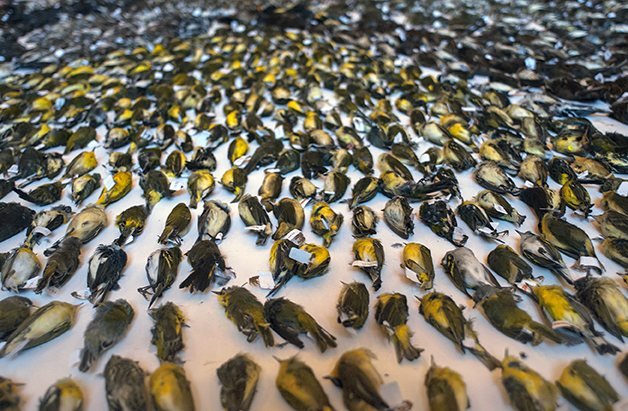 Toronto is a bottleneck spot on the North American migratory bird superhighway, which is a blessing and a curse.

We get to catch a glimpse of these feathered guests, but many die or are injured when they fly through town because they collide with windows. It is the leading cause of population decline in migratory birds.

Using the tracker, you can see radar images of incoming flocks. With the mapper, you can help keep tabs on bird collisions. Both tools will help FLAP create a body of evidence that will help explain more about why these collisions take place.

“You don’t have to know bird identification,” says Michael Mesure, executive director of FLAP. All you have to do is register and click on the map from your phone. The geomapping system locates you, and puts a bird icon on the map to register the collision.

Mesure says the importance of recording the information by citizens can’t be stressed enough because the bulk of birds that are dying are colliding with windows at homes and cottages.

“It’s not primarily commercial structures” responsible for the migratory bird population decline, he says. But they’re more noticeable than an injured bird in your backyard because it may be picked up by a cat or raccoon before you find it.

For each windowed structure there are approximately one to 10 bird collisions every year. Considering Toronto has approximately 940,000 buildings, that means there could be anywhere from under a million to almost 10 million every year. Most are fatal.

Mesure and his team of volunteers have seen 167 different species of birds since FLAP’s inception. Twenty of those are at-risk, meaning they’re threatened or endangered.

Of those 20 species, there is one in particular that Mesure says his team of volunteers picks up quite often – the Canada Warbler.

“When I first encountered this bird back in 1989 it was abundant and healthy. “Now, 20 years later, it’s a threatened species,” says Mesure.

But FLAP has also saved many injured birds through the process, and since they began recording collisions in 1993, they’ve also learned a great deal. He says the online tools will give others a glimpse into the busy spring migration that often goes unnoticed.

“The beauty of this is that it allows people to learn about bird migration, because the vast majority of people don’t know that birds are migrating in the numbers that they are as we’re in bed and asleep at night.”

In an average migratory season there are hundreds of thousands of birds passing through Toronto.

There are lots of ways to help our winged friends stay flying high and it starts with putting markers on your windows. For more information, visit flap.org.