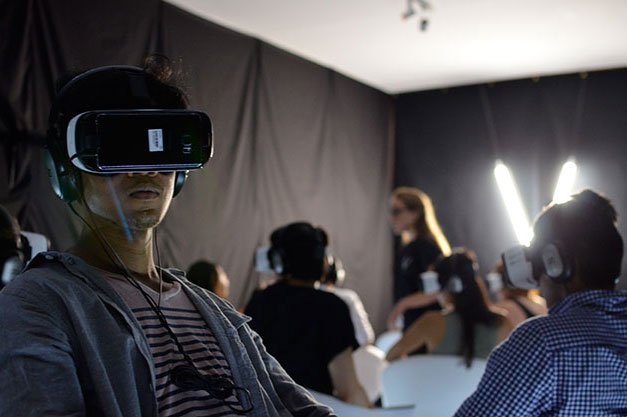 Launched by three Queens University grads, the Toronto-based company has curated a set of short films that can be watched – and essentially, experienced – in VR. Its unlike watching a typical movie because viewers are actually immersed in the films, which are shot using 360-degree cameras.

Its amazing to watch how engrossed people get in the experience. They start looking around and realize theyre not in the world around them anymore, but immersed in the world created by the film, says Ran Mo, one of VIVIDs cofounders.

Mo has worked in the entertainment industry for several years and most recently worked at YouTube, which has been adopting VR and 360 video. When NOW toured YouTube Spaces new Toronto incubator back in April, local YouTube stars (which the company calls creators) were being taught how to use the technology. It allows for a completely immersive visual experience, boundary-pushing storytelling and endless rewatchability.

For most people who dont work in tech, VR has typically been relegated to the gaming world. Even in the context of film, because VR headsets are so expensive, virtual-reality films have only been shown at select film festivals, like Sundance and Cannes. In Toronto, TIFF has started adopting VR and augmenting reality into their offerings. In June, TIFFs Digital Studio team launched POP, a set of three VR installations over three weekends this summer.

During POP, attendees can check out about a dozen different projects ranging from gaming to music videos, theatrical experiences, art and more.

But VIVID wants to take things a step further. At Milk Glass, Mo and his team have set up a 20-seat theatre where Samsung Gear VR headsets and headphones are assigned to individual chairs. The seats swivel 360 degrees, thus allowing audiences to physically move around as they explore three short films.

The first film is The Visitor, an austere piece set at a house in the desert where two people have a dialogue about fear. The live-action drama has a chilling, uneasy feeling throughout, and definitely lets you imagine how VR could be used in thriller and horror genres.

The next one, Imago, is about a former dancer cannot move or communicate. Whats interesting here is that the film is shot from the first-person perspective, so the viewer is that character unable to respond to those around her.

When you look down, you can see your hands and legs in your wheelchair, Mo explains. The potential behind telling first-person stories grow more exciting as the technology develops.

The final film, Sonar, is a 3D-generated science-fiction flick set on an asteroid. This one feels very much like a VR game, since theres lots of movement (Mo warns that some viewers may even experience vertigo) and the picture is digitally made.

Soon, audiences will be able to interact with these 3D environments, so as you walk around, youll see these environments actually move, Mo says.

When it comes to picture quality and narrative storytelling, these VR films have a long way to go however, they excel in other ways. Because theyre shot using 360 video, directors’ approach to filming has to change theres no place for lighting and sound technicians to hide on set.

Mo also points out that because VR technology is developing so quickly, some filmmakers find that by the time they complete a film, the VR technology has already transformed. Its part of the reason why no one has attempted to make a feature film quite yet. He sees VIVIDs VR cinema as a way for audiences to gain exposure to the start of VR films.

Were really just excited to take audiences on that journey from day one. No ones really figured out the best way to film this way. So these films aren’t perfect. But in five to 10 years, VR will be a central media form.

In order to visit the pop-up, attendees must reserve a time online. The entire experience costs $20 and lasts about 40 minutes, with a VIVID employees showing audiences how to use the Samsung Gear headset and providing some background on VR cinema and the films themselves. In August, new films will be introduced.

While we likely wont see VR headsets available at mainstream movie theatres for a long time, the technology around virtual reality is developing quickly. It’s destined to change visual entertainment.

I dont think VR films will ever replace regular films, but theyre a totally new way of storytelling and in a few years, it will stand on its own, Mo says. Because were the first ones doing this in North America, our audiences are also the first. Theyre going to experience all the coolness but also all the imperfections that come with VR films today, and thats very exciting.