Eleven years before she became the first woman to fly solo across the Atlantic, 19-year-old Amelia Earhart was a nurse's. 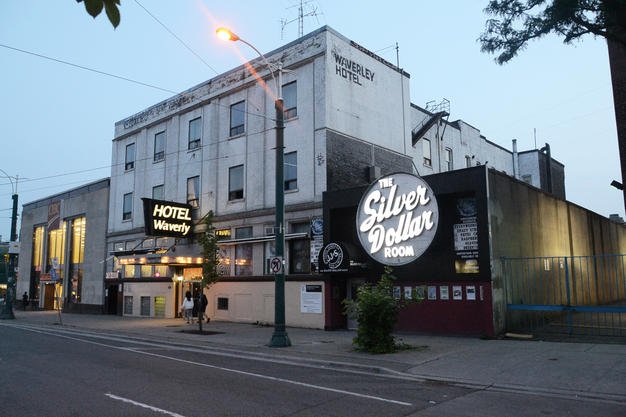 Victorian grandeur lined Spadina when Amelia Earhart was a WWI nurse's aid at a military hospital.|Looking south toward College on Spadina in 1927

Eleven years before she became the first woman to fly solo across the Atlantic, 19-year-old Amelia Earhart was a nurse’s aid at the Spadina Military Hospital in the Gothic pile of Knox College on Spadina Crescent.

She wrote afterwards, “There for the first time I realized what the World War meant. Instead of new uniforms and brass bands, I saw only the result of four years’ desperate struggle men without arms and legs, men who were paralyzed and men who were blind….”

Looking south from Knox College, the view that faced Earhart was one of unbroken Victorian and Edwardian grandeur. To her right was the newly completed Hotel Waverley. (Its rambunctious child, the Silver Dollar Room, was added in 1958.) There were none of the stark slab-and-block buildings that line the stub of Spadina between College and the Crescent today, where the Waverly (the second “e” was lost in the 80s) is all that remains of what was once a magnificent streetscape.

At different times in its life, the Waverly has been identified as a “standard hotel,” a “middle-class hostelry” and a flophouse. Yet it was elegant enough in its early days to be the headquarters of the Toronto Tourist and Convention Association, and if its elegance had been maintained, the Waverly might be considered “boutique” today.

That’s not going to happen.

On May 27, the Ontario Municipal Board delivered its verdict after a convoluted but exceedingly polite year-long fight for conservation against development and architectural gigantism. The Waverly will be demolished, but the 22-storey tower proposed for the site will be reduced to 15. Dreams that the hotel might be restored as the elegant podium of the new building – or that there might yet be an Amelia Earhart Lounge where martinis and killshots would be downed – were dashed. Its plaque dedicated to “the people’s poet” Milton Acorn will be transferred to the new building, which will be known as the “Waverly” or “Waverley” in name only.

The notorious Comfort Zone after-hours club in the Waverly’s basement will be replaced by three levels of underground parking.

The Silver Dollar next door, meanwhile, will spend the remainder of its days as an orphan.

Inside, its bar, terrazzo flooring, murals and photo collection will be restored. Outside, its facade will be demolished, set back to align with the new building and rebuilt with new materials to resemble, as closely as possible, its original appearance, complete with Silver Dollar sign.

While this might be characterized as a combination of architectural bowel cleanse and face transplant rather than “conservation,” it is the most realistic option available in a rapidly gentrifying and homogenizing Toronto, where architecture dances dramatically in the sky on roots of street-level banality.

The Waverly and the Silver Dollar knew the jig was up back in 2013 when notice of an application for redevelopment was posted on the Waverly’s wall.

What followed was a complicated debate over what deserves the designation “heritage” and what does not.

Lawyers who represented the city and those who represented the Wynn Group, owners of the site, heard testimony from two of Ontario’s most eminent heritage architects: Michael McClelland, who spoke for designation of both buildings, and Chris Borgal, a former president of Architectural Conservancy Ontario, who spoke for conservation of the Silver Dollar but not the Waverly.

Friends of nearby Lord Lansdowne Public School were determined to reduce the height of the proposed tower and the shadow it would cast over the school, and the Harbord Village Residents’ Association supported heritage ideals but thought the Silver Dollar should be kept in check and the Comfort Zone closed.

Madeleine McDowell, a senior member of the Toronto Preservation Board, recalls lunch dates with her mother at the Waverly in the late 1950s, and says it was “one of the few places in Toronto where black people and white people could dine together in comfort.”

McDowell also fondly remembers the Silver Dollar Room as the site of her first experiments in underage drinking, activities that no one who meets her today could imagine her having engaged in.

Tommy Danton and the Echoes were the house band when the Dollar opened on January 1, 1958.

Apart from a dazzling neon sign that is the equal of Sam the Record Man’s or the El Mocambo’s, the Silver Dollar’s concrete block and metal facade has little to show off. But inside, much faded glory remains: terrazzo on the staircase, a sweeping wooden bar with green velvet padding, two layers of murals of “musicians, performers and abstract patterns suggestive of music” and, on the stairs leading into the bar, autographed photographs of legendary blues greats taken by Allana Haradyn between 1993 and 99.

While the Silver Dollar flourished (as a strip club as well as a blues bar), the Waverly acquired a different kind of cultural history courtesy of a fascinating clientele.

On November 16, 1961, Arthur Lucas checked in. At 3 am the next morning he committed the murders in the now genteel Annex that led to his being one of the last two men to be hanged in Canada.

On April 4, 1968, James Earl Ray assassinated Martin Luther King Jr. in Memphis, Tennessee, and then fled to Toronto, where legend has it he stayed at the Waverly and drank at the Silver Dollar, despite Ray’s insistence that he did neither.

Apart from these and other desperate characters who stayed at the Waverly, its most famous resident was surely “the people’s poet,” Milton Acorn. He lived in the hotel between 1970 and 77, changing rooms constantly because he feared he was being bugged by the RCMP.

In those years he wrote three of his books of poetry, as well as this about his fellow residents: “The Waverly Hotel was full of character and characters. It was a place for all sorts of strange but true types. People who were down but not out.” Acorn died in 1986 at the age of 63. Heritage Toronto installed a plaque in his honour beside the Waverly’s front door in 2010.

The Waverly’s literary tradition didn’t die with Acorn. In 1989 Elmore Leonard published Killshot, one of whose characters is Armand Degas, an Ojibway hit man known as “the Blackbird,” a resident of the Waverly and a frequenter of the Silver Dollar:

“The Blackbird told himself he was drinking too much because he lived in this hotel and the Silver Dollar was close by, right downstairs. Try to walk out the door past it. Try to come along Spadina Avenue, see that goddamn Silver Dollar sign, hundreds of light bulbs in your face, and not be drawn in there. Have a few drinks before coming up to this room with a ceiling that looked like a road map, all the cracks in it.”

The Waverly, the old Silver Dollar and the Comfort Zone weren’t for sissies, but they will be missed – then likely forgotten.

So let’s wrap with the last word from “Water into Beer,” who posted this remembrance online on June 28, 2014: “I used to hang at Grossmans with my compadres, often in the company of one of Canada’s best poets, Milton Acorn… an angry commie drunk whose insight and erudition [are] sadly missed. He lived at the Waverley back then and many a night we’d go up the street for a nightcap and a few sets at the Dollar before pouring Milton into his bed. If you drain all colour from a neighbourhood, all you have left is the colour of cement… grey.”