We Still The North

Raptors lose Game 7 heartbreaker to the Nets, but there's plenty to be optimistic about in Toronto 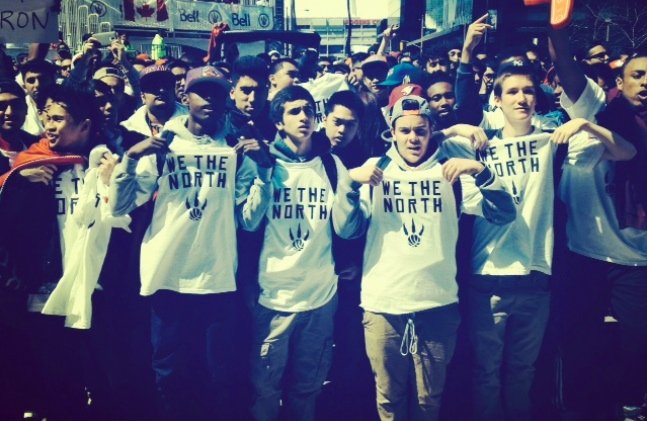 The optimism of last year's playoff run was nowhere to be found for the 2015 version of the Raptors. Photo by Julia LeConte.

We were this close to South Beach.

One more bucket from us, one more foul from them, even, and we could have been watching our Toronto Raptors play against a LeBron James-led Miami Heat squad vying for a three-peat.

Outplayed most of the game and trailing by as many as 12, the Raptors waited until the final three minutes to mount their comeback. Through free-throws and scrappiness and Kyle Lowry grit, they chipped it away to a one-possession game. For most of the final minute, the ACC was beyond thrilled that we’d have the chance to chuck up a three-ball for the tie.

We really had no business ever getting within one point.

But through some miracle (actually, two miracle Terrence Ross plays – one offensive and one defensive – that redeemed an otherwise spotty game for the second-year player), there we were: inbounding the ball, down only one with seven seconds remaining – a relative fourth-quarter eternity. Plenty of time to make a real, actual play.

After failing to score over a cluster of Brooklyn trees, Kyle Lowry collapsed to the ground in the kind of emotional agony that is only comprehensible to those players who have missed game-winning shots in game 7s of playoff series.

And no one wishes they could replay those last few seconds more than Lowry. Afterward, he sat in the locker room in his uniform for over a half-hour while his teammates showered and changed. The presence of his son, Karter Lowry, colouring on a whiteboard next to Steve Novak Jr, seemingly the only thing keeping him from a catatonic state.

Our city is under a similar fog right now. That’s the funny thing about sports teams. They’re a lot like lovers: the better yours is, the harder it hurts when they let you down.

There are hundreds of thousands of hurtin’ Raps fans right now. This time last year, we had already picked some other team to get behind: Chicago, Oklahoma City, maybe San Antonio. The Raptors couldn’t burn us because they were 10th in a weak Eastern Conference. We didn’t expect anything from them.

And so, impossible as it is to shake that “we were THIS close” feeling, as difficult as it might seem to resist finding solace in the bottom of a box of cheap Ontario wine, we have to try to focus on the bigger picture here.

Few expected the Raptors to make the post-season this year, and not one soul on the face of the earth predicted they would have finished third in their conference. They won their division, got the most Ws in Raptors history, and were the best fourth-quarter team in the league. Consider the fact that they went 6-12 to start the season – before the franchise-ish player Rudy Gay was traded – and those statistics are almost mind-boggling.

And while it was brief, the post-season was one for the ages. It started out weird and wonderful – Toronto GM Masai Ujiri yelling “Fuck Brooklyn!” to a riled up crowd of playoff-hungry fans – and never disappointed after that. Even if our team wasn’t winning, there was always something to write about: clever things like We The North, Northern Uprising and Jurassic Park hashtags stupid, hilarious things like Drake lint-rolling his pants and inspiring a million memes and bizarre sponsorships and inspiring, heart-tugging things like our arena being so damn loud and supportive that Magic Johnson was giving us props. Suddenly we’re known as having the best fans in the NBA – hilarious, considering we’re the only Canadian team and are also the heart of Leafs Nation.

But the most important and impressive thing that happened this year is the way the city of Toronto put on for the Raps. For two weeks, the grid was dotted in the red, white and purple of Raptors caps, toques and jerseys. People who never really cared about basketball started caring about the Raptors. Surly idiots will call it bandwaggon-jumping. I call it enthusiasm, open-mindedness and Toronto pride. Very simply: it’s proof that winning teams will earn more fans. Bandwaggoners can be just another name for a growing fan base. And that’s a great thing.

Over 10,000 people came out to “Raptors Square” outside the ACC for game 7, and they were screaming themselves hoarse long before tipoff. They were incredibly young and the definition of cultural diversity. They had schlepped down hours before game time from all corners of the GTA: Brampton, Mississauga, Scarborough, etc. This is the future of Toronto, and they’re basketball fans, definitely. But here’s the thing, in the five months since the Gay trade, DeRozan, Lowry, Amir Johnson and co are doing something pretty special: they’re creating a city of Raptors fans. And that hasn’t happened, really, since the Vince Carter era.

The mood post-game around the ACC was understandably sober, but two memorable occasions brought forth big smiles from our two star players. The first was Lowry revealing what DeRozan said to him as he lay on the ground after the final buzzer.

“That’s my man,” Lowry said, with an expression of deep gratitude that for a second looked like it could turn into tears. “He said, ‘if anybody’s taking that shot, I’m living and dying with you taking that shot.’ It was just one of those things where it was a great brotherly moment.”

When it was DeRozan’s turn at the podium, he was asked what he will say to Lowry (who is now a free agent) to get him to stay in Toronto. “I’m not worried about that,” he said flashing a huge grin. “I don’t need to say anything to him. Honestly. I’m not worried about that. The relationship me and Kyle have, I don’t have to say much. Why would he leave?”

Why indeed. See you next year, Raptors.