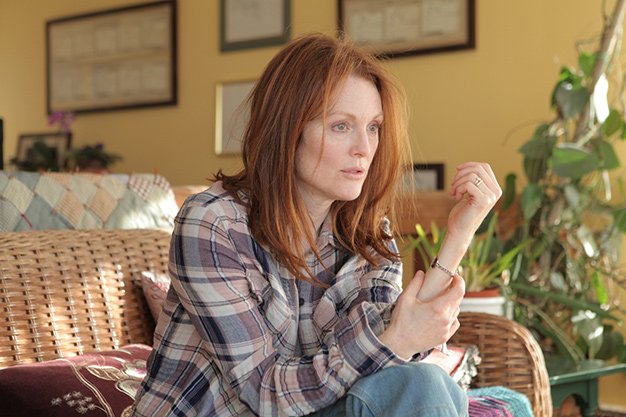 A Girl Walks Home Alone at Night (Ana Lily Amirpour) follows a vampire (Sheila Vand) as she cruises the streets of a fictional Iranian city on a skateboard inviting men to chat her up, make a move, bring her home. They do what they do she does what she does. But eventually she meets a guy (Arash Marandi) who doesn’t follow the pattern he isn’t hostile or domineering, doesn’t fall for her quiet, submissive front. That’s when things get really interesting, as writer/director Amirpour lets the characters simply spend time together and watches what happens. The film is less concerned with its plot than with creating a world and a mood into which the audience can sink. Shooting in black-and-white widescreen in southern California for a little extra unreality, Amirpour has built a marvellous world that shares its DNA with Godard, Jarmusch, Lynch, Tarantino and Bigelow. Subtitled. 99 min.

Leviathan (Andrey Zvyagintsev) is an epic drama set in a small Russian town where a property dispute between a hotheaded family man (Alexey Serebryakov) and the venal local mayor (Roman Madyanov) leads to a series of escalating confrontations. It plays equally well as slow-motion domestic tragedy and a study of the internalized corruption of post-Soviet Russia. Toronto audiences might find some uncomfortable parallels in Madyanov’s character, Mayor Mer – a drunken, grasping boor whose single-minded selfishness destroys the lives of everyone unfortunate enough to get in his way. Zvyagintsev’s characters occasionally walk past the beached skeletons of giant sea creatures Madyanov’s performance suggests Mer is merely just the latest monster to plague this region. He’s a little less conspicuous, maybe, but just as destructive. Subtitled. 141 min.

The 50 Year Argument (Martin Scorsese, David Tedeschi) is a documentary about the New York Review of Books, which celebrated a half-century of publication in 2013. Launched by Robert Silvers and his late partner, Barbara Epstein, as a sort of counter-narrative to American news magazines, the NYRB gave writers the space to really consider the literary world, which naturally led to considerations of geopolitics and social issues and the general reshaping of intellectual discourse. Co-directors Scorsese and Tedeschi interview such illustrious contributors as Joan Didion and Michael Chabon, but the real pleasure is in archival footage of people like Susan Sontag, Norman Mailer and Gore Vidal defending their pieces – or arguing about them with each other – on talk shows and news programs. It’s a bracing film about the value of radical ideas and the importance of being courageous enough to consider them. 118 min.

Cake (Daniel Barnz) stars Jennifer Aniston as a deeply damaged woman who becomes fixated on understanding the suicide of a member of her chronic-pain group (Anna Kendrick), leading her to befriend the dead woman’s husband (Sam Worthington). Awkwardly straddling the line between dark comedy and miserablist drama, Barnz’s latest nearly-there project (after Beastly and Won’t Back Down) takes a terrific performance from Aniston and surrounds it with stereotypes, cheap psychological gimmickry and at least two of the plot lines from 2010’s far more successful Rabbit Hole. Also pretty good: Adriana Barraza, who puts more thought into the role of Aniston’s housekeeper-cum-assistant than screenwriter Patrick Tobin did, and Worthington, who gives his shattered widower a bruised dignity and sardonic wit. Kendrick, as a particularly chipper hallucination, is wasted. 102 min.

Still Alice (Richard Glatzer, Wash Westmoreland) follows a woman slowly losing her mind to early Alzheimer’s. It’s not easy to give that premise much texture, but Still Alice succeeds because the script focuses less on Alice’s (Julianne Moore) relationships with family, including her husband (Alec Baldwin), and more on the ingenious strategies she uses to keep the ravages of her disease at bay. Moore gives a powerful performance (no surprise there), Baldwin’s sensitive turn goes against type, and Kristen Stewart, as one of Alice’s kids, proves she can show a pulse if given the chance. The film does have a predictable trajectory – how could it not? – but it’s certainly not movie-of-the-week fare. 99 min.

Tru Love (Kate Johnston, Shauna MacDonald) follows commitment-phobe Tru (co-director/co-writer MacDonald), who meets Alice (Kate Trotter) – the mom of Suzanne (Christine Horne), one of her one-night stands – and is shocked to discover herself falling for the older woman. Tru Love has a seriously soapy quality, and scenes between Alice and the ghost of her husband definitely get in the way. And why would Suzanne, who is so upset with Tru, have her meet her mother in the first place? But the performances are exceptional. Horne is all twitchy intensity, and Trotter, with that great voice of hers, is delightful as a woman discovering new possibilities. You can see what’s turning Tru on. But it’s MacDonald, winning as the title character, who makes you care about what happens. She’s infinitely watchable.      87 min.

Why Don’t You Play in Hell? (Sion Sono) is best approached as the world’s highest roller coaster. If you have the stamina to get to the fun part, it’s totally worth it. In Sion’s 2013 feature – which won the Midnight Madness People’s Choice Award at TIFF that year – a yakuza revenge thriller plays out against a rambunctious tale of young rebel filmmakers determined to create a guerilla action masterpiece. Both stories pay off in a climactic sword battle between rival gangsters, choreographed with massive helpings of gore, twisted humour and meta-narrative. It’s a spectacular set piece, both conceptually and strategically, and watching it is like snorting cocaine through a Twizzler off a Blu-ray of Kill Bill Vol. 1. But to get there, Sion slogs through 100 minutes of meandering character stuff that places his various film lovers, gangsters, warriors and bystanders where they need to be for the finale. Beyond a plotl ine featuring Fumi Nikaidô as a crime boss’s daughter bent on avenging her mother’s imprisonment, almost none of it is fun or engaging. But if you can make it until the end, there’s one helluva payoff. Subtitled. 129 min.

The Humbling (Barry Levinson) features a perfectly cast Al Pacino as a panicking aging actor, but the film just can’t shake its creepy premise. Famed thespian Simon, fearing that he’s dogged by dementia, hurls himself off the stage during a performance and heads for a month to a mental facility. When he returns to his Connecticut mansion, he has an affair with the lesbian Pegeen (Greta Gerwig), much to the distress of her exes and, of course, her parents. There’s no reason for Pegeen to be a dyke except to build on the fantasies of the aging Philip Roth, who was well into his 70s when he wrote the original novella. And the relationship goes off the rails in nonsensical ways. Director Levinson does good work with his actors – Gerwig, as always, is great, sustaining an edgy energy – but this is really two stories: one about an old guy trying to prove he’s still got it sexually, and the other about an artist losing his grip on his craft. The latter plot point is decent. The former? Yuck. 106 min.

Song One (Kate Barker-Froyland) stars Anne Hathaway as Franny, a grad student called home to New York when her brother (Ben Rosenfield) is hit by a cab and knocked into a coma. Investigating what Henry was up to before his accident, she winds up meeting her brother’s idol, British singer/songwriter James Forester (Clouds Of Sils Maria’s Johnny Flynn). As Franny and James wind up seeing more and more of each other, writer/director Barker-Froyland tries to shift Song One from a clenched family drama to a looser love story, but it doesn’t really work. Though Hathaway plays both modes just fine, Flynn isn’t a strong enough actor to play against her, or even to suggest his character’s charisma. He’s got chops as a musician, though, and it certainly helps that he’s performing songs written expressly for the film by Jenny Lewis and Johnathan Rice. If you’re a huge Hathaway fan, this will be worth your time she’s in every scene, and builds a convincingly tense relationship with screen mom Mary Steenburgen. But if you’re looking for the next Once, well, this isn’t it. 88 min.

Bolshoi Ballet: Swan Lake is a high-def broadcast of the Tchaikovsky ballet. 170 min.

In The Gallery – Girl With A Pearl Earring And Other Treasures From The Mauritshuis Museum is a high-def tour of the museum in the Hague, with a special look at Vermeer’s masterpiece. 85 min.