NOW MagazineMovies & TVWeekend Movies: It Follows, The Resurrection of a Bastard, The Riot Club and more

Weekend Movies: It Follows, The Resurrection of a Bastard, The Riot Club and more 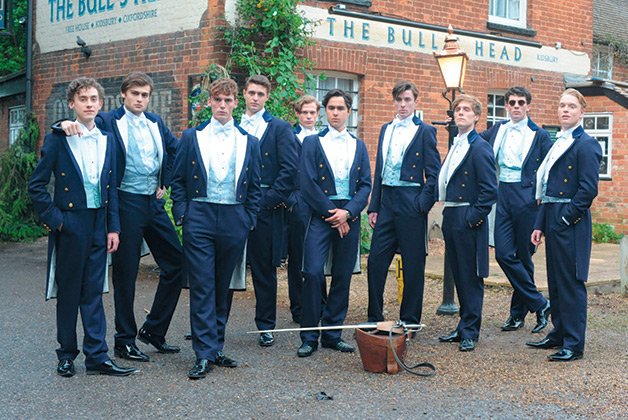 It Follows (David Robert Mitchell) is a high-concept nail-biter about 19-year-old Jay (Maika Monroe), whose new boyfriend infects her with a sexually transmitted demon that will stalk and kill her unless she passes the curse along to someone else. It’s a metaphor worthy of early Cronenberg, and the movie runs with it, building unnerving tension with long takes of mundane activity that aren’t interrupted so much as invaded by something walking into the frame. Monroe (The Guest) is fantastic in the lead, letting us see Jay’s evolution from skeptic to believer to calculating survivor, and writer/director Mitchell has thought his monster through to the last detail, teaching us the rules as we go and letting his characters be as smart as the menace they face. 100 min.

Marinoni: The Fire In The Frame (Tony Girardin) has a fantastic subject in 75-year-old Giuseppe Marinoni, a cranky but revered Montreal manufacturer of bicycle frames determined to set a world distance record for his age group. Here, he’s training for his 2012 date with destiny, which will involve a trip back to his native Italy and an hour of furious cycling. (The trial is held on an indoor track, and he’ll be going full-out for 60 minutes straight.) This is hardly a sports documentary: its subject is happier caring for his chickens and foraging for mushrooms than he is talking about himself, and there are moments when the irascible Mari noni’s annoyance with Girardin’s camera makes the picture feel like an uneasy buddy comedy. Subtitled. 87 min.

The Resurrection of a Bastard (Guido van Driel) is a brutally violent and haunting and impressionistic crime movie from a Dutch director making an auspicious debut. Yorick van Wageningen is riveting as Ronnie, a psychopathic mob henchman who at one point uses a vacuum cleaner to relieve a victim of his eye. After surviving an attempt on his life, Ronnie’s a changed man, seemingly frightened by his former self. His story eventually intersects with that of a young black refugee (Goua Robert Grovogui) escaping a tragic past to begin a new life in the Netherlands. Van Driel’s work recalls early Christian Petzold, the German director who mines Hitchcockian genre tropes for national allegories. Slyly dealing with anti-immigration feeling and Islamophobia in the Netherlands, the film mixes Tarantino-esque violence with dreamlike, impressionistic gestures, contemplating hate, fear and regret. Subtitled. 89 min.

That Guy Dick Miller (Elijah Drenner) is an unabashed celebration of the veteran character actor, whose filmography reads like the history of American genre cinema. For Roger Corman, he was the sad sack Walter Paisley in A Bucket Of Blood and flower-eater Burson Fouch in The Little Shop Of Horrors for Joe Dante, he explained werewolf mythology in The Howling and played the cranky Murray Futterman in two Gremlins movies. And, perhaps most memorably, he was the gun shop owner who provided Arnold Schwarzenegger’s arsenal in The Terminator. For those of us who grew up gorging on cult movies, it’s a delight to watch Miller – now 86 and maybe a little cranky – go over his career while his wife, Lainie (who co-produced), prods him for stories about colleagues and specific projects. 92 min.

Home (Tim Johnson) is an animated adventure about squid-like aliens called Boovs who abduct people only to safely deposit them in an amusement park called Happy Humans Town. That’s about as nefarious as things get in this harmless, familiar, pastel distraction for kids. The Big Bang Theory’s Jim Parsons voices a fugitive Boov named Oh, a perpetual goof whose most recent fumble has compromised his species’ relocation to Earth. He teams up with Tip (Rihanna), a teen searching for her mother after a mishap during the gentle alien invasion. They get chased by Boovs riding high-speed bubbles (again, how kid-friendly can you get?), while engaging in predictable banter about dancing and toiletries. Oh and Tip may not be the most memorable animated duo, but Parsons’s high-pitched squeal and the groove in Ri hanna’s voice bounce off each other nicely. 94 min.

The Riot Club (Lone Scherfig) is a savage indictment of England’s privileged class. Adapted by Laura Wade from her play Posh, the film looks at Oxford freshmen Miles (Max Irons) and Alistair (Sam Claflin), who are asked to join a centuries-old secret society that not only indulges in debauchery, but also harbours disturbing ideas about entitlement and the poor. Director Scherfig (An Education, One Day) brings a liveliness to the early scenes and seductively draws us into this world along with the two students. Irons and Claflin are terrific as the contrasting protagonists, with solid work by Holliday Grainger as Miles’s girlfriend from a more modest background and Douglas Booth as another club member. Some attempts at opening up the play don’t work, however, particularly the needlessly repeated scenes of regular folks’ reactions to the upper-class pricks during an extended, brutally powerful dinner sequence. 107 min.

White God (Kornél Mundruczó) is a heroic narrative built around a mutt named Hagen, the best friend of young Lili (Zsófia Psotta). But mongrels aren’t welcome in Budapest, so Lili’s father (Sándor Zsótér) dumps him in the street, where he’s eventually inducted into a dogfighting ring. And things will get a lot worse before they have a hope of finding one another. (The credits include an assurance that no animals were harmed in the making of the film.) It’s a dog version of Gladiator and Rise Of The Planet Of The Apes, and while Mundruczó has a tendency to drag out the action so you can better consider his metaphors, when the simplicity of image and clarity of performance (whether human or canine) combine, you’ll feel like you’re watching something amazing. Subtitled. 121 min.

The Wonders (Alice Rohwacher) demonstrates its director’s considerable talent, despite its flaws. Wolfgang (Sam Louwyck), his wife, Angelica (Alba Rohrwacher), and their four daughters raise bees in what seems like a hermetically sealed world in rural Italy. To muster funds to update their equipment, they take in troubled teen Martin (Luís Huilca Logrono) from child services, and then eldest daughter Gelsomina (Maria Alexandra Lungu) enters the family in a reality TV competition for old-school farmers. The beekeeping scenes are fascinating, and director Rohrwacher sensitively captures the budding sexuality of Gelsomina and Martin, but she has trouble with tone. The opening looks like a sequence from a stalker thriller, and Wolfgang seems more menacing than the story warrants. The amusing TV show – with an ironic Monica Bellucci as the host – doesn’t pack quite the punch a culture clash between old and new worlds should. But if you’re looking for a gentle film with sometimes powerful imagery, The Wonders will work for you. Subtitled. 111 min.

Boychoir (François Girard) features music that will make your ears perk up, but the drama is a symphony of false notes. The coming-of-ager from Canadian director Girard (The Red Violin) follows a Texas boy from the wrong side of the tracks who finds himself in a prestigious East Coast music school. Call it The Blind Side without the black people. Newcomer Garrett Wareing plays the 11-year-old disaster, who hits a kid in the head with a trash can at school and goes home to clean up after his alcoholic mother. Too bad this efficiently schematic scene from his hard life feels completely artificial. When his mom dies, he ends up, through some savvy (and unbelievable) hustling by his principal, under the care of the fictional National Boychoir Academy, headed by jaded genius Carvelle (Dustin Hoffman). You might forgive Hoffman for sleepwalking through this performance, given the deadly dull and predictable proceedings. 103 min.

October Gale (Rubba Nadda) can’t be saved, even by a great performance from Patricia Clarkson. She plays Helen, a recently widowed doctor who gives medical attention to a man with a gunshot wound (Scott Speedman) when he washes ashore near her remote cottage.  And the shooter wants to finish the job. This is supposed to be director Nadda’s study of a grieving woman in a heightened emotional state responding to a dangerous situation, but Helen’s reactions make no sense, and the final scene strains credulity. The film is shot with a lot of intense close-ups, and there’s plenty of mood, but it’s all for naught. You know exactly what’s going to happen during the not so climactic confrontation. A disappointing step backwards for the director of Sabah and Cairo Time. 91 min.

Queen and Country (John Boorman) finds writer/director Boorman returning to the universe of his semi-autobiographical drama Hope And Glory, picking up the story of young Bill Rohan (Callum Turner) nine years later. He’s conscripted into the British Army, befriends a hothead (American actor Caleb Landry Jones, struggling with both the accent and the character’s emotional volatility) and clashes with his high-strung commanding officer (David Thewlis) and chases after a posh girl (Camelot’s Tamsin Egerton). If Boorman wants to reimagine his life as a wan service comedy, that’s certainly his right, but the dull plots and obnoxious supporting characters just left me missing the clear narrative and understated tone of Hope And Glory. Given how richly his countryman Terence Davies has realized postwar England in movies like Distant Voices, Still Lives and The Deep Blue Sea, the cartoonishness of Queen And Country grates even further. 115 min.

Get Hard (Etan Cohen) is a comedy starring Will Ferrell and Kevin Hart about a white-collar criminal who’s heading to prison and enlists the help of a streetwise guy to learn how to survive in the big house. Screened after press time – see review March 27 at nowtoronto.com/movies. 100 min.

The Metropolitan Opera: Les Contes D’Hoffmann Encore is a high-def broadcast of the Offenbach opera, starring Vittorio Grigolo as the eponymous poet and adventurer. 230 min.

WWE – WrestleMania 31 is the live simulcast of a wrestling match. 360 min.