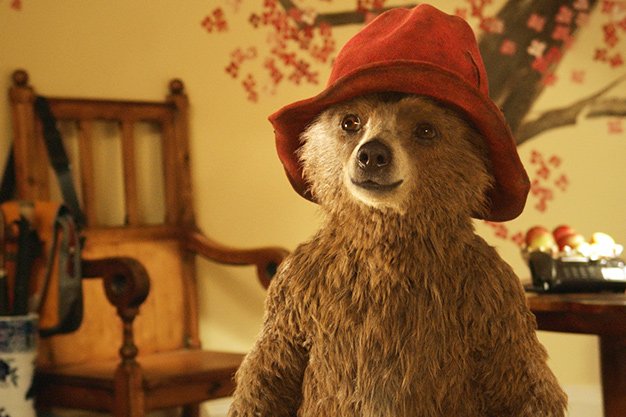 Paddington (Paul King) is perfect. I don’t just say this as a cold-hearted, cynical middle-aged film critic, but as a cold-hearted, cynical, middle-aged film critic who’s been actively dreading the project ever since seeing those first weirdly creepy images of the CGI bear. But writer/director King’s remarkable adaptation of Michael Bond’s beloved children’s books spins the story of the lost little bear from Darkest Peru – voiced by The Hour’s Ben Whishaw – into a thoughtful and genuinely moving metaphor for the immigrant experience. It even underlines the theme by having racist neighbour Mr. Curry (Peter Capaldi, eminently hissable) tell the little bear’s human guardians (Downton Abbey’s Hugh Bonneville and Blue Jasmine’s Sally Hawkins) he doesn’t want to hear any of Paddington’s “jungle music” at night. The film is cartoonish in precisely the right way, situating its talking, marmalade-loving, tragically accident-prone protagonist in a lush, just slightly exaggerated universe of delightful British actors. And on an emotional level, it’s the story of a lost child finding friends and a place to belong. I’d have loved this when I was a kid. Hell, I love it now. 95 min.

Two Days, One Night (Jean-Pierre Dardenne, Luc Dardenne) is yet another excellent working-class drama from the Dardenne brothers, with the magnificent Marion Cotillard at the fore. Her Sandra is struggling with depression and has just received word that co-workers voted to eliminate her factory job in order to save their bonus. While her initial reaction is to drown her sorrows in pills, her husband and friends insist that she convince her colleagues to have a change of heart. Sandra’s door-to-door pleading makes up the time span of the title, but her appeal for socialism eventually takes a back seat to her furious private struggle against mental illness, beautifully conveyed in Cotillard’s quivering face and resigned posture. This is a powerful, minimalist film about rallying self-worth in a dehumanizing economy. Subtitled. 92 min.

Last Days in Vietnam (Rory Kennedy) looks at the absolute chaos of the final weeks of America’s presence in the convulsing nation. The war effort was collapsing into incoherence, half a million civilians were trying to claim refugee status so they could escape through the U.S. embassy in Saigon, and Americans were doing everything they could to save individual lives. Four decades on, documentarian Kennedy and her crew have collected stories from Americans and Vietnamese who were there, matching them to archival footage to construct a narrative that’s as close to definitive as possible. It’s a fascinating story of institutional denial and personal commitment – both somehow bound up in the personal arc of U.S. ambassador Graham Martin, who refused to acknowledge the deteriorating state of the war but finally reversed himself to marshal a last-ditch effort to evacuate hundreds of people. Humanity won out. 98 min.

Appropriate Behavior (Desiree Akhavan) stars writer/director Akhavan as Shirin, who in the opening scene is breaking up with her girlfriend, Maxine (Rebecca Henderson), and spends the rest of the pic trying to recover. She semi-stalks her ex, tries a three-way, takes up with a passive-aggressive guy – you get the picture. Flashbacks reveal how the couple met – not cute – and the issues they consistently fought about: mostly Shirin’s refusal to come out to her Iranian immigrant parents because she considers herself bisexual. There are precious few loving moments between the two, but until the breakup, the arguments seem to act as aphrodisiacs. Shirin’s wholly narcissistic and consistently snide, so it’s hard to stay interested her. Truculent girlfriend Maxine, ferociously played by Henderson, at least has some political passion. But Akhavan knows how to write dialogue that sounds authentic, and the whole thing winds up being pretty entertaining. She’s definitely one to watch. Some subtitles. 87 min.

Housebound (Gerard Johnstone) is a highly eccentric horror comedy about an angry young woman named Kylie (Morgana O’Reilly) who finds herself under house arrest in her family home, which her mother (Rima Te Wiata) insists is haunted. Writer-director Johnstone creates a convincing genre world and then totally punctures it since Kylie is too wrapped up in her own stuff to be scared she’s the sort of person who, when surprised by a creepy doll, will throw it across the room or set it on fire rather than scream. She’s a marvellous character, and O’Reilly’s pissy, impatient performance never stops paying off, especially once the movie really starts digging into the mother-daughter relationship. (Te Wiata is also really good, finding a credible emotional level for someone who could easily have come off as a smothering nutter.) The mixture of slapstick and splatter recalls the earlier, funny films of Johnstone’s countryman Peter Jackson, though Johnstone doesn’t quite have the demented conviction that powered Jackson’s Bad Taste and Braindead to their delirious payoffs. That said, there’s still plenty to enjoy, especially with a crowd. 107 min.

American Sniper (Clint Eastwood) turns the alpha-male autobiography of Navy SEAL turned Iraq War sniper turned right-wing poster boy Chris Kyle into a dull, by-the-numbers war drama. In the film, Kyle is an interesting, almost tragic character. A bulked-up, bearded Bradley Cooper does a fine job of showing us how deeply uncomfortable he is stateside, though Sienna Miller gets little more to do than look concerned as his wife. But Eastwood’s disconnected direction means we spend the entire movie with a man in stasis: Kyle’s either hiding behind the scope of a rifle or sitting very still, drinking himself insensate. Forcing Cooper and Miller to play a key scene with a rubber doll instead of an actual baby is another indicator of Eastwood’s late-period laziness, the most egregious sign since he included a child actor’s flubbed line reading in Hereafter. At 84, he’s earned the right to coast – but we don’t have to pretend he’s still making good movies. 132 min.

Escobar: Paradise Lost (Andrea Di Stefano) doesn’t have enough Benicio Del Toro. He commands the screen, playing Pablo Escobar as a jovial, grandfatherly type whose deadly reputation is only hinted at by a slight menace in his eyes. However, the focus here is Josh Hutcherson’s fictional, bland Canadian surfer boy Nick. We see Escobar filtered through his perspective, which is like trying to enjoy a dark roast Colombian coffee brewed at Tim Hortons. Nick hooks up with the drug lord’s niece and becomes an unwitting associate in his empire. While Del Toro’s Escobar fills the space with his looming presence, Hutcherson and Claudia Traisac (as his flame) must work with characters who are nothing more than pawns in a generic and unconvincing gangland thriller. 120 min.

In The Gallery – Girl With A Pearl Earring And Other Treasures From The Mauritshuis Museum is a high-def tour of the museum in the Hague, with a special look at Vermeer’s masterpiece. 85 min.

The Wedding Ringer (Jeremy Garelick) is a comedy about a socially awkward guy (Josh Gad) who books a best man for hire (Kevin Hart) at his wedding. Screened after press time – see review January 16 at nowtoronto.com/movies. 101 min.