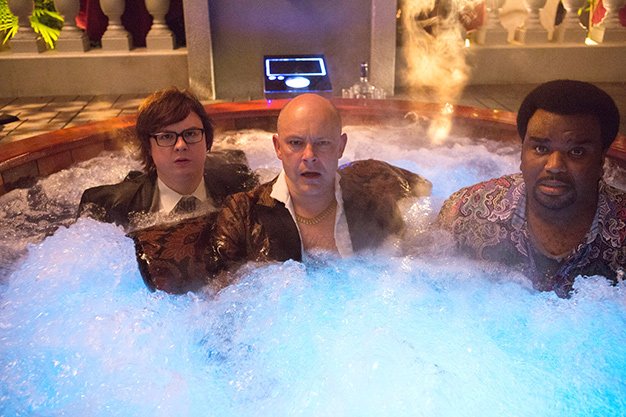 King Lear (Stratford Festival) (Joan Tosoni) is a high-def broadcast of Stratford’s acclaimed production of the Shakespeare tragedy. This filmed version captures all the power of Antoni Cimolino’s clear, muscular staging, crowned by Colm Feore’s magnificent Lear: initially vain and pompous, he becomes angry and fearful as he’s spurned by two of his daughters (Maev Beaty and Liisa Repo-Martell, both excellent), and as he rages in the storm he becomes a figure of pity. His mournful cry in the final act will bring tears to your eyes – it did to mine both in the stage version and here. Director Tosoni’s swiftly moving camera takes some getting used to, but it underscores some nice intimate moments and renders some big ones – like the visceral blinding of Gloucester (Scott Wentworth) – with energy and imagination. 180 min.

Siddharth (Richie Mehta) is the Mississauga-raised director’s assured sophomore feature, about a man’s urgent search for his missing son. It’s a harrowing look at poverty and desperation in India’s slums. Rajesh Tailang gives a quietly wrenching performance as chain-wallah Mahendra (he fixes zippers), who sends 12-year-old Siddharth to work out of town to help support the family. When the boy fails to return home, matters both trivial and critical impede Mahendra’s quest. He barely has money to travel and doesn’t even have a photo of his son. Mehta keeps his sociopolitical critique in the background, allowing it to inform but not interfere with his intimate and devastating story. Subtitled. 97 min.

The Duff (Ari Sandel) follows the identity crisis of high-school senior Bianca (Mae Whitman) when she realizes she’s her group’s Designated Ugly Fat Friend – the one others keep around to make themselves look more attractive – and decides to challenge the accepted social structure. The premise sounds like an update of the 90s touchstone She’s All That, but The DUFF has a little more on its mind. It’s genuinely interested in the ramifications of Bianca’s identity crisis, and Whitman’s playing a human being rather than a caricature. Robbie Amell is also surprisingly nuanced as the insensitive but ultimately decent instigator of Bianca’s reinvention. It occasionally plays like a mashup of Mean Girls and Easy A, but Whitman’s performance gives The DUFF a spiky energy all its own. 101 min.

Matt Shepard is a Friend of Mine (Michele Josue) not only revisits the tragedy of Matthew Shepard, gay-bashed and left to die tied up to a fence in Laramie, Wyoming, 17 years ago it draws a full portrait of the very human young man – friends knew him as Matt – who became a national symbol. Director Josue talks to Shepard’s colleagues, high school pals, teachers and fellow gay activists about the real, complex Matt, his depression after being gang-raped, his love of life, his passion for politics and the way his death galvanized the LGBTQ movement in the U.S and inspired his mother Judy’s new-found activism. There’s nothing new here in terms of documentary form, and there are too many filler scenes shot from inside cars driving down Wyoming’s highways. But this is an important, emotionally powerful story. 89 min.

McFarland (Niki Caro) is based on a true story: in the late 80s, transplanted football coach Jim White convinced the Latino students at his struggling California high school to form a cross-country running team and compete at the state level. They don’t make crowd-pleasing sports movies about underdogs who don’t amount to anything, so you can sort of figure out where it’s going. The real question with a movie like McFarland is whether it plays the required beats in an interesting or entertaining way, or simply goes through the motions. Kevin Costner is really good at playing earnest authority figures, and he delivers as the well-meaning White. New Zealand-born director Caro shows the same eye for natural landscapes and sharp sense of community dynamics that she brought to Whale Rider and North Country. And White’s charges are defined reasonably well as individuals rather than stereotypes. It could move a little faster, and be a little less proud of its own progressiveness, but McFarland is a sports movie that knows what it’s doing for the most part and ends strong. Some subtitles. 129 min.

The Wrecking Crew (Denny Tedesco) remembers the backup musicians who were key to the hit records cranked out in Los Angeles in the early and mid-60s. It’s a variation on the The Funk Brothers and the Oscar-winning 20 Feet From Stardom, but can’t quite duplicate them. It lacks the political sinew of 20 Feet and can’t, like The Funk Brothers, claim that one session group dominated the scene. By the time director Tedesco name-checks multiple base players, guitarists and drummers, it’s not clear who the Wrecking Crew actually is. But the doc does have its virtues, chiefly bassist Carol Kaye, whose bass ines defined songs like Sonny and Cher’s The Beat Goes, and Tedesco’s guitarist dad, Tommy – seen in interviews recorded elsewhere and the film’s inspiration – who’s a great character. If you know the tunes, you’ll love this. And the issue of how fans were fooled into thinking that bands like the Byrds and the Association played on all their records is an important one. 102 min.

Hot Tub Time Machine 2 (Steve Pink) is exactly what you’d expect from a Hot Tub Time Machine sequel: bros partying heartily and insulting each other while checking out the racks on hot ladies, and also time-travel jokes. The wrinkle? This time, having Marty McFlyed themselves a better history by tweaking the past, our idiot heroes – minus John Cusack, whose absence sets up a plot point that never actually pays off – jump 10 years into the future to figure out who’s responsible for taking a shotgun to the penis of id-monster Lou (Rob Corddry). As before, talented comic actors – Corddry, Craig Robinson, Clark Duke and series newcomers Adam Scott, Gillian Jacobs, Jason Jones and Kumail Nanjiani – do their best to liven up a barely-there script, which director Pink shoots as haphazardly as possible. Retro-fashion jokes are replaced with future-fashion jokes, and a running gag about the characters’ pilfering technological and cultural artifacts from the past and claiming them as their own quickly runs out of gas. Worse, the thing just drips with gay panic the movie does everything but shout “no homo” at the audience as one of the characters is literally forced to rape two of the others. I laughed a few times, but more at the actors’ timing than at what they were saying. 93 min.

Daryl Hall & John Oates: Live In Dublin is a high-def broadcast of the rock duo’s sold-out concert at the Olympic Theatre from July 2014. 97 min.

The Metropolitan Opera – Die Meistersinger von Nürnberg Encore is a high-def production of Wagner’s comic opera about a group of Renaissance master singers competing in a contest, conducted by James Levine. 370 min.

Russell Madness (Robert Vince) is a family movie about a terrier who dreams of having a family of his own. 91 min.