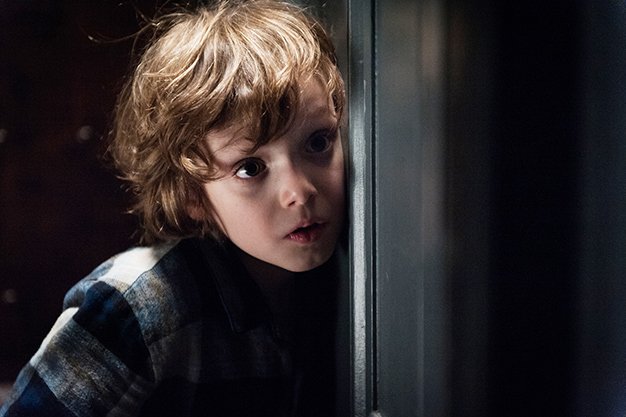 The Babadook (Jennifer Kent) is a new horror classic. Seven years after her husband’s death in a car crash, Aussie Amelia (Essie Davis) and her precocious son, Samuel (the adorable Noah Wiseman), are getting by. She’s a nurse who works with elderly patients, while Samuel, preoccupied with homemade weapons and magic, begins to act out at school. When the two read a picture book called Mr. Babadook that’s mysteriously appeared on their bookshelf, he becomes obsessed with the eponymous hollow-eyed, top-hatted creature and is convinced it’s coming to get them. What makes the film so effective is that the horror comes out of character, not situation. There are echoes of other filmmakers, but first-time filmmaker Kent’s vision is her own. The work can be taken literally or as a metaphor for the pressures put on a grieving, overworked single mother. Wiseman makes one of the most convincing scared kids in the horror canon, while Davis moves from mousy, self-doubting pushover to ferociously powerful force. Terrifying. 93 min.

1971 (Johanna Hamilton) may not be as dynamic or immediate a work as executive producer Laura Poitras’s Citizenfour, but as a look at the earliest iteration of America as a security state, it’s essential. Hamilton’s film recalls the burglary of an FBI office in Media, Pennsylvania, by eight pissed-off Philadelphians. They released the stolen documents to the Washington Post and a couple of congressmen, exposing the malfeasance of operations against college activists and J. Edgar Hoover’s COINTELPRO program against Americans he felt were undermining the nation. Hamilton tells the story through archival footage, a few re-enactments and present-day interviews with surviving members of the Citizens’ Commission to Investigate the FBI, who are understandably proud of their accomplishment if still a little surprised that they didn’t end up being tried for treason. 79 min.

King Lear (Stratford Festival) (Joan Tosoni) is a high-def broadcast of Stratford’s acclaimed production of the Shakespeare tragedy. This filmed version captures all the power of Antoni Cimolino’s clear, muscular staging, crowned by Colm Feore’s magnificent Lear: initially vain and pompous, he becomes angry and fearful as he’s spurned by two of his daughters (Maev Beaty and Liisa Repo-Martell, both excellent), and as he rages in the storm he becomes a figure of pity. His mournful cry in the final act will bring tears to your eyes – it did to mine both in the stage version and here. Director Tosoni’s swiftly moving camera takes some getting used to, but it underscores some nice intimate moments and renders some big ones – like the visceral blinding of Gloucester (Scott Wentworth) – with energy and imagination. 180 min.

Wild Tales (Damián Szifron) is a comic anthology of five shorts and one lightning-fast prologue all revolving around revenge, responsibility and payback – but the real motivator in each tale turns out to be a violation of the agreed-upon social  order. A server at a diner debates whether to poison the man who ruined her parents’ lives the road rage of a pair of motorists escalates into blood lust a bride takes extreme measures to express her displeasure at her new husband’s recent dalliance. It’s all expertly orchestrated by Argentine director Szifron, who demonstrates a flair for delivering absurd complications with marvellous comic timing and rich cinematic style. Nothing feels like a filmmaker showing off just because he can everything that transpires is rooted in the characters’ emotional reality, however baroque it may appear to us. Subtitled. 122 min.

The Second Best Exotic Marigold Hotel (John Madden) is all about director Madden and screenwriter Ol Parker replicating the pleasant, empty charms of their 2012 collaboration – providing two more agreeable hours of life-affirming pap without condescending to their aging audience. The sequel’s title refers to a new hotel that Dev Patel’s fussy Sonny wants to open, which necessitates the involvement of an American corporation and the anticipated arrival of an undercover inspector at the original Best Exotic – right around the time that Richard Gere turns up as a dashing Yank with an eye for Sonny’s mother (Lillete Dubey). I could have done with less of Sonny’s comical wittering and more of Judi Dench and Maggie Smith’s grand dames sitting around sipping drinks in the sun, but The Second Best Exotic Marigold Hotel wasn’t made for me. It’s for a different audience, and they will get exactly what they want from it. Some subtitles. 122 min.

The Valley Below (Kyle Thomas) is a multi-narrative film that tracks the lives of several Drumheller, Alberta residents over three seasons. A 19-year-old discovers she’s pregnant a singer/songwriter finds his ambitions undone by alcoholism a taxidermist quietly struggles to reanimate his failing marriage a constable looks after local families while wondering if he’ll ever start a family of his own. Some vignettes are moving and insightful, while others seem stuck at the sketch level. The vagaries of procreation and the difficulty of sustaining love over the long term are the dominant themes, while the surrounding Badlands, whether seen through heat shimmer or encrusted with frost, evoke the vastness of geological time in contrast to the fleeting lives depicted in the foreground. 87 min.

Kidnapping Mr. Heineken (Daniel Alfredson) stars Jim Sturgess and Sam Worthington as the masterminds behind the 1983 high stakes abduction of beer baron Freddy Heineken (Anthony Hopkins). In more capable hands, the sensational case would have made for terrific entertainment. The perpetrators took two years to carefully plan the abduction, the mechanics of which provide the film’s most interesting details, from the carpentry involved in building soundproof hideouts to the perfect framing of a Polaroid to be delivered with ransom instructions. If only Alfredson and his writers were as meticulous in developing the characters and building a consistent tone. The film clumsily alternates between gritty crime drama, high-octane actioner and psychological thriller as Heineken sporadically plays head games with his abductors. The remaining cast members fill out the genre clichés – noble outlaw, cowardly traitor, sensitive brute – never giving a solid feel for the real people they supposedly portray. 94 min.

The Intruders (Adam Massey) stacks the deck with all the familiar horror signposts – creaky walls and doors, mutilated plastic dolls – as if straying from clichés is the most frightening thing of all. Miranda Cosgrove’s Rose is an off-her-meds teen whose recently widowed, ever-absent father thinks his daughter is schizophrenic when she reports that things are going bump in the night in their new home. His lack of concern is contagious. The Intruders can’t conjure the requisite tension or sense of unease because all the jolts and revelations are delivered right on time, as if the formula were mapped out on the clock. 92 min.

Serial (Bad) Weddings (Philippe de Chauveron) is an unfunny, offensive French farce about a privileged, middle-aged white Catholic couple (Christian Clavier and Chantal Lauby) whose daughters have all married immigrants (a Jew, an Arab and a Chinese man). They want their remaining child to wed a nice Catholic boy. She does, and he has the nice French-sounding name of Charles. But it turns out – are you ready? – he’s black, originally from the Ivory Coast. The fact that the man’s parents – who are coming for the wedding – are mildly racist themselves doesn’t make the film go down any easier, especially since France, like much of Europe, is currently seething with civil unrest. Subtitled. 97 min.

Bolshoi Ballet: Romeo And Juliet is a high-def broadcast of the ballet, starring Alexander Volchkov and Anna Nikulina. 145 min.

Chappie (Neill Blomkamp) is a sci-fi actioner about a stolen, reprogrammed robot that begins to think and feel for itself. Screened after press time – see review March 6 at nowtoronto.com/movies. 120 min.

The Drop Box (Brian Ivie) is a documentary about a baby drop box that Pastor Lee Jong-rak installed on the side of his home. 79 min.

Unfinished Business (Ken Scott) is a comedy about business guys who go to Europe to close a deal but get caught up in a sex fetish event and a global economic summit. Screened after press time – see review March 6 at nowtoronto.com/movies. 91 min.