NOW MagazineMovies & TVNews & FeaturesWeekend Movies: The Imitation Game, Top Five, The Hobbit: The Battle of the Five Armies and more

Weekend Movies: The Imitation Game, Top Five, The Hobbit: The Battle of the Five Armies and more 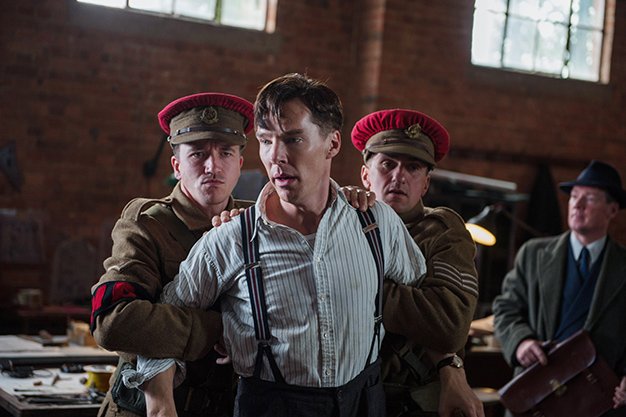 Michael Keaton (left) and Edward Norton cant save hollow Birdman.|Miles Teller buckles under his bully of an instructor (J.K. Simmons) in Whiplash.|Boyhood|Ralph Fiennes is at your service.

Benedict Cumberbatch's cryptanalyst Alan Turing refuses to be broken in The Imitation Game.

The Imitation Game (Morten Tyldum) features first-rate performances and a quick-paced, moving story that help this drama rise above the traditional biopic. Brilliant Cambridge mathematician and cryptanalyst Alan Turing (Benedict Cumberbatch) is hired by the British government to crack the Germans’ Enigma code during the Second World War. Used to working solo (he’d eventually lay the ground for the modern computer), he must collaborate with a team of misfit geniuses and keep their work a secret. Also secret is his homosexuality, which after the war gets him persecuted by the country he helped save. Shuttling back and forth between three time periods, the script is often blunt, especially in a repeated line of dialogue about nonconformists doing extraordinary things. Director Tyldum adds some unnecessary archival war footage, but the film explores fascinating moral issues in its final third. Cumberbatch is a revelation as the socially inept man who fights for his dignity, and he’s given strong support by Keira Knightley, Matthew Goode, Charles Dance, Rory Kinnear and Mark Strong as intriguing variables in Turing’s complex personal equation. 114 min.

Top Five (Chris Rock) is a showbiz satire that proves Rock can be an intimate and insightful filmmaker. He stars as recovering alcoholic Andre Allen, a comic-turned-movie-star who’s had a string of flops since going sober and trying to become a serious actor. The film takes place over one antic day, as Allen is tailed by a fetching New York Times journalist (Rosario Dawson) while promoting a movie and preparing for his highly publicized wedding to a reality television star (Gabrielle Union). Rock uses his familiarity with the industry to goofy and hilarious ends, but as the day progresses he surprises us with an overwhelming sense of vulnerability and pain – a human side to celebrity that is often overlooked. 102 min.

Antarctica: A Year on Ice (Anthony Powell) is a charming personal documentary about what life is actually like on an Antarctic research station. Time-lapse cameras give a sense of the grandeur and hostility of the Antarctic landscape amazing camcorder footage shows a Condition 1 storm that makes going outside a terrifying proposition. The compression is a little stifling, since Powell only allows himself a few minutes for any one aspect or anecdote. I would have loved to know more about Polar T3 Syndrome, a cognitive disorder brought on by the long winters that’s brought up and abandoned before it can be fully explained. But then we might not have had time to see clips from results of the 48-hour film festival Powell once arranged among the bases, which are demented and delightful. And more penguins, of course. 91 min.

The Decent One (Vanessa Lapa) is a suitably nauseating documentary portrait of Nazi Reichsführer Heinrich Himmler. Its visuals are exclusively of impressive archival materials, while its soundtrack weaves together correspondence and diary entries read in voice-over, corny sound effects and a chamber music score. I’m not sure anything here will enlighten you as to how Himmler could justify the atrocities he carried out. He was clearly a devout patriot and ideologue from early childhood who grew into a true believer in National Socialism and lebensraum, with all the anti-Semitism, homophobia and genocidal tendencies that involved. The Decent One has historical value, but its cinematic power is limited and its moral or psychological insights few. 94 min.

Zero Motivation (Talya Lavie) tracks the crushing boredom of clerical work in a miserable office, the twist being that the office is on an Israeli army base, where two friends in the IDF amuse each other while suffering the indignities of low rank and minimal responsibility. Writer/director Lavie’s feature debut plays like an Israeli version of Broad City, in which a neurotic underachiever (Nelly Tagar) is forever dragged into trouble by her manic BFF (Dana Ivgy), with a few twists that likely never occurred to Abbi Jacobson and Ilana Glazer. A word of warning: though Zero Motivation is being sold as a comedy, and it mostly is, but it also includes some fairly jarring elements. Be prepared for some darkness amidst the laughs. Subtitled. 100 min.

Exodus: Gods and Kings (Ridley Scott) exists in relation to The Ten Commandments in much the same way producer/director Scott’s Oscar-winning Gladiator did to The Fall Of The Roman Empire – a big, historically questionable genre picture upscaled with CGI and a lot of very serious acting. The massive story plays out in the personal conflict between two characters: Moses and Rameses (Christian Bale and Joel Edgerton), raised as brothers by the emperor Seti (John Turturro, somehow) and divided by tribal commitments. Rameses becomes pharaoh Moses discovers his Hebrew heritage and is exiled to the desert, where he marries Sefora (Maria Valverde) and is commanded by God to return to Egypt and free his people. You know what happens next. Scott’s self-serious machinery demands sombre realism even during the depiction of miracles, which proves kind of a drag. I longed for Darren Aronofsky’s recent Noah, which acknowledged the insane implications of its story. Scott makes sure we know that the proper definition of “Israelite” is “one who wrestles with God.” He himself is still wrestling with the kind of movie he wants to make. 150 min.

The Hobbit: The Battle of the Five Armies (Peter Jackson) will probably please those who’ve been salivating to see the climax of the director’s gargantuan adaptation of J.R.R. Tolkien’s slender prequel to The Lord Of The Rings. But the rest of us will be struggling with some serious Middle-earth fatigue. At nearly eight hours, the Hobbit trilogy contains all the weaknesses of Jackson’s Rings films (big battle sequences that look far too obviously like software fighting software, jarring disconnect between grim mythological scenes and broader comic moments) and precious few of its strengths. The importance of the characters’ relationships are diminished by their isolation from one another, and Martin Freeman’s rich, considered performance as Bilbo Baggins is shoved aside for half a dozen other subplots that have no emotional resonance whatsoever. At two hours and 24 minutes it’s the shortest of the trilogy, but it still feels far longer than it needs to be, especially since the Smaug-related cliffhanger is resolved 15 minutes in. Some subtitles. 144 min.

Matisse From MoMA and Tate Modern – An In The Gallery Presentation (Phil Grabsky) is a doc about the blockbuster Matisse exhibition. 90 min.

The Metropolitan Opera – Die Meistersinger von Nürnberg is a high-def production of Wagner’s comic opera about a group of Renaissance master singers competing in a contest, conducted by James Levine. 370 min.