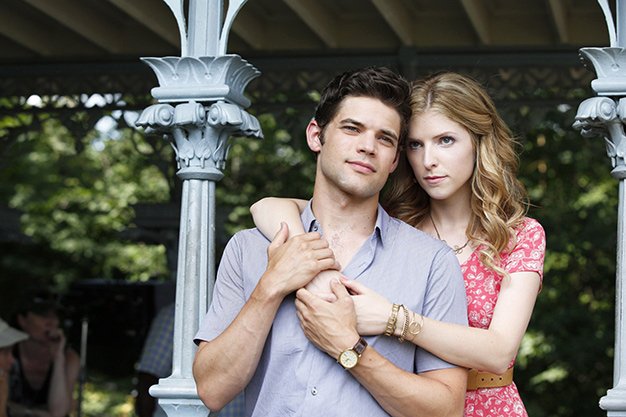 In Her Place (Albert Shin) is an expertly plotted drama that packs a paralyzing emotional gut punch. In rural South Korea, a well-to-do city woman (Yoon Da Kyung) moves in with an elderly farm woman (Kil Hae Yeon) and her pregnant teen (Ahn Ji Hye) with the intention of adopting the child. Their arrangement is not apparent when we first encounter the three nameless women, who cautiously circle one another. Other figures pass through, but In Her Place is essentially a moody, slow-burning three-hander that skilfully rotates our sympathies amongst the three women. While the set-up and consequences are simple, the compelling characters are complicated and mysterious, acting on motivations we may not immediately grasp but can certainly feel. Societal demands and class differences are just two of the factors that stir this dramatic pressure cooker. Subtitled. 115 min.

The Last Five Years (Richard LaGravenese) is an adaptation of the off-Broadway musical in which a young couple (Anna Kendrick, Smash’s Jeremy Jordan) recount the ups and downs of their relationship in song – she moving backwards from the bitter end, and he going forwards from the optimistic beginning. LaGravenese isn’t the smoothest director of musicals, sometimes struggling to translate the intimate blocking of a stage performance to the more “real” world on screen, but the actors are so good at selling the concept that it almost doesn’t matter. Kendrick in particular has never had a better showcase. She’s always been a vivid screen presence, but when she sings she’s absolutely electric. I was shocked to discover Summer In Ohio was part of the original musical, because she makes you believe it was written just for her. 90 min.

Timbuktu (Abderrahmane Sissako) is a surprisingly gentle movie, given that it’s about Islamic militants imposing sharia law upon a small community that doesn’t particularly want it. (The calm tone in the face of mounting tensions will not surprise anyone who’s seen Mauritanian filmmaker Sissako’s earlier features Waiting For Happiness or Bamako, although there might not be too many of us.) For the most part, people go about their lives without much change: the local imam (Adel Mahmoud Cherif) tries to counsel compassion, a cattle herder (Ibrahim Ahmed dit Pino) and his wife (Toulou Kiki) try to conduct themselves according to their own definitions of faith, and a singer (Fatoumata Diawara) refuses to obey the latest edict prohibiting music. Director/co-writer Sissako is clearly on their side, but he also allows the jihadis their measure of humanity. There are no cartoon villains here, just people who’ll do the worst thing possible while thinking they’re being eminently reasonable. Subtitled. 97 min.

The Voices (Marjane Satrapi) stars Ryan Reynolds as Jerry, a small-town factory worker who tries his best to be a pleasant fellow and model employee, but, darn his luck, his cat keeps telling him to kill people. It’s best not to know anything more about The Voices, which goes to some very dark places as Jerry’s interactions with his co-workers (Gemma Arterton, Anna Kendrick) and his psychiatrist (Jacki Weaver) grow increasingly strained. I’m still not sure if The Voices is a triumph on purpose or by accident, but however it happened, it’s still a triumph. Director Satrapi and screenwriter Michael R. Perry show their cards a hair too early, but that just proves how otherwise perfectly calibrated their movie is. Reynolds is fantastic as the deeply confused protagonist, while Arterton and Kendrick do some very subtle work in the margins. Don’t read anything more. Just see it. 104 min.

What We Do in the Shadows (Jemaine Clement, Taika Waititi) is a giddy, mostly improvised mockumentary about a quartet of vampire flatmates living in Wellington, New Zealand. The movie’s sense of humour falls somewhere between deadpan and bloody hysterical, as the centuries-old predators annoy each other with petty personal tics and egotistical attempts to out-cool one another. Clement camps it up as the brooding Vladislav, who carries himself like the Kiwi Nick Cave – though in fairness, he was probably doing that centuries before Cave was born. And Waititi is adorable as the good-natured Viago, smiling awkwardly at the camera while wiping off the blood from his latest fumbled attempt at feeding. You have to love the little monster. 85 min.

Fifty Shades of Grey (Sam Taylor-Johnson) is the screen adaptation of the massive bestseller about a literature student (Dakota Johnson) who embarks on an affair with a handsome billionaire (Jamie Dornan) who’s into rough sex. Screened after press time – see review February 13 at nowtoronto.com/movies. 124 min.

In The Gallery – Rembrandt takes you through the major show about the Dutch artist hosted by London’s National Gallery and Amsterdam’s Rijksmuseum. 85 min.

The Metropolitan Opera: Iolanta and Bluebeard’s Castle Live is a high-def broadcast of a double bill of operas by Tchaikovsky and Bartók. 230 min.