Weekend Movies: The Lazarus Effect, The Duke of Burgundy, Girlhood and more 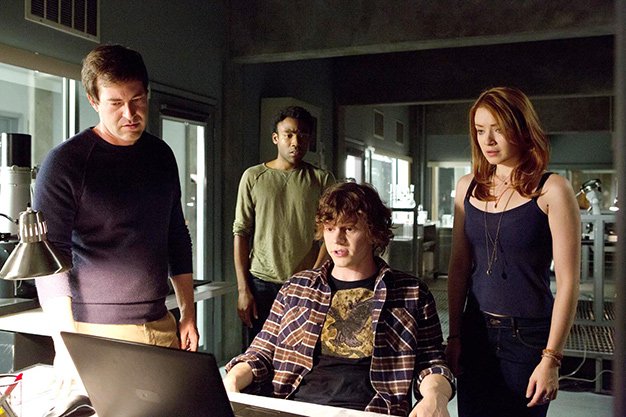 The Duke of Burgundy (Peter Strickland) is about a lesbian S/M relationship, but director Strickland (Berberian Sound Studio) is more interested in sexual politics than heat. Somewhere in Europe, maybe in the 70s, Evelyn (Chiara D’Anna, innocent yet feral) is the bottom and Cynthia (Sidse Babett Knudsen, wonderfully needy) the top. Soon it becomes obvious that it’s Evelyn who’s in total control. Strickland creates a hermetically sealed environment in a mammoth villa that the couple leave only to attend lectures about insects in what appears to be an all-female universe. Cynthia is a lepidopterist, a metaphor for I don’t know what. (The duke of burgundy is the name of a butterfly.) Strickland’s powerful aesthetic comes through in extended footage of insect wings flapping and unsettling dream sequences, all set to Cat’s Eyes’ eerie music. Just don’t look for any revealing backstories or a turn-on, regardless of your sexual tastes. Subtitled. 105 min.

Gett: The Trial of Viviane Amsalem (Ronit and Shlomi Elkabetz) takes place entirely within a sterile rabbinic courtroom, where a divorce hearing drags on for more than five years. Viviane (Ronit Elkabetz) files for divorce from her devoutly Orthodox and emotionally distant husband, Elisha (Simon Abkarian). According to Jewish law, the couple cannot end their relationship unless the husband grants his wife a divorce, or gett. Elisha refuses to do so, motivated by a mix of stubbornness, hurt pride and revenge. The set-up can make things frustratingly constrictive, but that’s the point: the film is no more exasperating than the patriarchal legal system it depicts. Surrounded by a stellar ensemble, Elkabetz’s heart-wrenching performance anchors the film, subtly conveying Viviane’s warmth, passion and sensuality, all tragically hemmed in by the dark, buttoned-up garb, hair ties and frown imposed upon her. Subtitled. 115 min.

Girlhood (Céline Sciamma) follows 16-year-old Marieme, aka Vic (the charismatic Karidja Touré), who lives in a housing project in suburban Paris. When she gets kicked out of the academic stream – caring for her family while her mother works nights has compromised her grades – she falls in with a gang of girls led by Lady (Assa Sylla, terrific). Gang life doesn’t improve her choices and neither does finding a boyfriend. Soon she’s taking up with heavyweight hoodlums. Sciamma (Tomboy) taps her compassion for young people in spectacular moments: Girls engaged in animated conversation go silent when they pass a group of guys. In one superb scene, Vic’s gang, clad in dresses they just shoplifted, dance and lip-synch to Rihanna’s Diamonds while partying in a hotel room. The opening high-energy sequence features Vic and school pals playing football, and it’s slightly problematic evidence of Vic’s personal connections weakens the case for her profound alienation. But this is a small complaint about a film from a director with a lot of style and even more to say. Subtitled. 113 min.

After the Ball (Sean Garrity) may be predictable and a little bit ridiculous, but it’s a lot of fun. In this fractured take on Cinderella, talented aspiring fashion designer Kate (Portia Doubleday) goes to work for her father (Chris Noth) only to discover that her stepmother (Lauren Holly) and stepsisters are bent on sabotaging her career and the family’s fashion house. When she’s fired, she dresses as a guy and goes to work at the company as designer Nate. The prince is shoe designer Daniel (Marc-André Grondin) – yes, a glass slipper does figure – who’s got trust issues. Doubleday, appealing as clumsy Kate, is not all that convincing as a man, and there’s more than a little sexism in the portrayal of the not-so-bright stepsisters. But there are some zippy one-liners, a refreshing change from other dreary Telefilm-funded scripts. Think of After The Ball the way many of us approach a high-end fashion mag, as a guilty pleasure. 100 min.

Ballet 422 (Jody Lee Lipes) will be of interest to dance aficionados and those in the performing arts. It takes you through every step in the creation of a new ballet by emerging choreographer Justin Peck, who’s in his 20s and in the corps of the New York City Ballet. The vérité doc looks at a short piece he’s mounted for the company, from conception to rehearsal to sweaty-palmed opening night. You see Peck working with everyone from lighting and costume designers to the stage manager, the orchestra and, most intimately, his fellow dancers. Peck’s an unnervingly calm and serene subject nothing fazes him, which means there’s not much tension. And we don’t get a look at his personal life. But there are worse ways to spend 72 minutes than watching beautifully expressive dancers learn their moves, get fitted for costumes and apply their own makeup. 72 min.

Focus (Glenn Ficarra, John Requa) stars Will Smith as a master con artist who lets a small-time scammer (Margot Robbie, last seen in The Wolf Of Wall Street) into his crew, and into his heart – or does he? The new film from writer/directors Ficarra and Requa (I Love You Phillip Morris Crazy, Stupid, Love.) is built on a base of constantly shifting loyalties and agendas played out against vividly realized locations in New York, New Orleans and Buenos Aires. The sense of gamesmanship is woven into the texture of the film. The scams are less important than the relationships of the people involved in them, Smith and Robbie have a spiky chemistry, Adrian Martinez, BD Wong and Gerald McRaney pop up in rich supporting roles, and Ficarra and Requa aren’t out to trick their audience with elaborate, impossible plotting they just don’t serve us everything on a silver platter. It’s appreciated. 105 min.

Big News from Grand Rock (Daniel Perlmutter) stars Ennis Esmer as a small-town reporter who tries to save his failing newspaper by turning movie plots into front-page stories – only to find his work under scrutiny by a big-city reporter (Meredith MacNeill) when he writes about secret medical experiments being conducted in his tiny Ontario town. It feels like a charming B-story on Corner Gas, and the actors certainly put in the work. Esmer makes obliviousness charming: it’s like he missed that one J-school class about ethics and can’t understand why everyone’s so pissed at him. MacNeill’s sketch-comedy instincts, honed on Man Stroke Woman and This Hour Has 22 Minutes, keep peeking out in the conflict between her character’s professional offence and an unexpected attraction to the man she’s certain is a fraud. But what might power a fun 22 minutes of television proves unworkably naive at an hour and a half, and writer/director Perlmutter’s insistent folksiness becomes exasperating and ultimately exhausting. 87 min.

Elephant Song (Charles Binamé) features maverick Quebec actor-turned-filmmaker Xavier Dolan in front of the camera rather than behind it. But veteran character actor Bruce Greenwood is the real star as a psychiatrist at a Quebec mental institution trying to glean the whereabouts of a missing colleague from a disturbed young inmate (Dolan). The film was adapted by Nicolas Billon from his play of the same name, and director Binamé’s visualization of it remains utterly stage-bound. Other than brief, impressionistic flashbacks to Cuba and South Africa, it’s just Greenwood and Dolan talking in circles while the occasional supporting character – played by the ridiculously overqualified likes of Catherine Keener or Carrie-Anne Moss – barges into the room. Greenwood is totally convincing as a professional teetering on the edge of desperation, but Dolan’s twitchy, mannered turn gives him almost nothing to play against. 110 min.

The Lazarus Effect (David Gelb) is a mildly self-aware riff on Frankenstein and Re-Animator, with a team of researchers using their breakthrough corpse-reviving serum on one of their own members after an accident. It’s not the best idea. Director Gelb (Jiro Dreams Of Sushi) livens up some very derivative material with interesting casting – Mark Duplass, Olivia Wilde, Donald Glover, Evan Peters and Sarah Bolger make engaging lab rats – and a sleek visual design that makes the most of a limited laboratory setting. But the script gets less adventurous as it goes along, slowly shedding every intriguing idea and character detail for an utterly conventional final act. 83 min.

Monsoon (Sturla Gunnarsson) would be a far more impressive accomplishment had Jennifer Baichwal not already made Act Of God and Watermark, documentaries which actually dig into the mythologies we create to rationalize the indifference of natural world. In contrast, Gunnarsson’s Monsoon is a splendidly photographed travelogue, but nothing more: the filmmaker wanders through India’s provinces capturing spectacular images of rainfall and flooding but never really builds a thesis or grapples with what he sees. There is a tradition of observational documentaries that present events and images without offering context or insight, but Monsoon doesn’t even do that. There’s no curiosity, not even a pretense of investigation. It’s just tourism. Some subtitles. 108 min.

Playing it Cool (Justin Reardon) is The F Word remade by sociopaths, setting Chris Evans and Michelle Monaghan to grapple with platonic buddyship instead of Daniel Radcliffe and Zoe Kazan. Screenwriters Chris Shafer and Paul Vicknair aren’t interested in creating relatable characters, instead relying on rom-com stereotypes and contrivances that are supposedly excused by making Evans’s character a jaded screenwriter. (This guy, right? Complaining at length about the artifice of romantic comedies even as his life turns into one!) Worst of all, though, is its wholesale waste of an insanely talented cast – and not just Evans and Monaghan but Ioan Gruffudd, Aubrey Plaza, Luke Wilson, Martin Starr, Topher Grace, Philip Baker Hall and Anthony Mackie. I enjoy every last one of them, but not like this. Dear god, not like this. 94 min.

Aerosmith Rocks Donington 2014 (Dick Carruthers) is a high-def broadcast of a concert by the rock band filmed in Leicestershire last summer. 104 min.

In The Gallery – Rembrandt takes you through the major show about the Dutch artist hosted by London’s National Gallery and Amsterdam’s Rijksmuseum. 85 min.

Russell Madness (Robert Vince) is a family movie about a terrier who dreams of having a family of his own. 91 min.