Brooklyn duo harmonize their influences on a haunting debut album 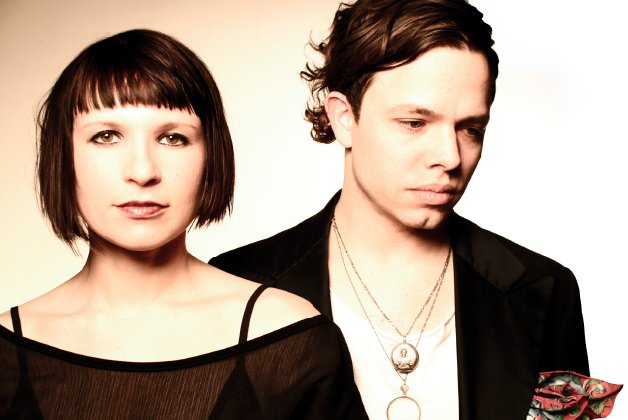 What do you get when you cross classic hip-hop videos, Baz Luhrmann’s Romeo + Juliet and traditional Day of the Dead imagery? The new video for Brooklyn-based dark pop duo Weeknight’s single Dark Light.

These disparate ingredients – each bold and ambitious – could’ve spelled disaster. But in the hands of director Austin Kearns, the result seems bound to become a cult favourite.

“I used to be a dancer, and I really only like hip-hop or dance music videos, so I thought if I were going to make a music video, that’s what was going to happen,” says Weeknight’s Holly MacGibbon, who co-wrote the video treatment with Kearns.

The director came up with the other concepts, and soon the band found themselves shooting in their Brooklyn loft and on a nearby rooftop.

“I totally stayed out of it,” jokes Weeknight’s other member, Andy Simmons.

Of the storyboards, maybe. But Simmons’s life experience inspires the duo’s brooding, hymnal sound. “I used to go to church with my grandmother every week,” he says. “She was the organ player. So my first musical influences were those weird, echoey church harmonies.”

A couple since 2005 and musical collaborators since 2007, the two are understandably excited to leave behind their various part-time jobs and hit the road for the next couple of months.

Onstage, the album’s sensuous orchestration comes to life thanks to Simmons’s guitar, MacGibbon’s synths, a drum machine and cued-up samples. Plus, of course, those affecting voices.

“There were maybe six vocal takes for each song,” says Simmons. “[We had to] step away, and eventually the initial melody of the songs totally went away and we ended up singing around it, giving it a darker, more haunting feel. It was a lot of experimenting and finding out what really worked.”