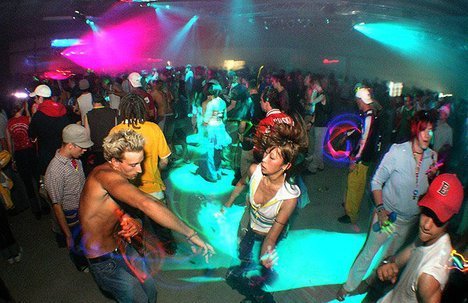 Riding the rave at WEMF.

Candy Kids rejoice! The World Electronic Music Festival (WEMF) is back. On August 12-14, for the first time since 2008, blissed out electronic music fans can once again dance all night wearing sunglasses at the iconic three-day rave.

Promoters at Destiny Event Productions swore the 2008 party would be the final WEMF, but are now promising this year will be bigger and better than ever. The first-round lineup includes huge names like Rusko and Andy C. But one question remains. Namely, where the fuck is it?

WEMF promoter Jesse Brown said the venue is top-secret until sometime in April. On message boards, impatient ravers nag and rumours fly about where ‘in the picturesque hills of Southern Ontario’ WEMF will throw down. But Dubsteppers don’t get how good they’ll have it this year compared to WEMF attendees of years past.

Back in 1995, when a tornado ripped through Mosport International Raceway and threatened to halt WEMF in its first year (it was called the World Trance Festival back then), promoters kept the location secret until the last second to avoid heat from the cops. They handed out maps with lines and numbers, no words. The day of, ravers called an info line and matched numbers to street names, said Brown.

Just a decade ago in Bobcaygeon, at the height of the crackdown on raves, permit problems and OPP roadblocks threatened to shut down the festival and saw thousands of potential attendees turned away by police.

“We had to have everyone meet at a location along the way. We’d give them a map with four different ways to get there. We’d say, if the police stop you here, this is an alternate route,” said Brown.

Now, WEMF – and rave culture in general – has gotten larger, hit the masses, and become less of a target for the authorities, he said. “We’ve grown from being forced to throw parties in abandoned warehouses to being able to use beautiful clubs and all sorts of interesting spaces.”

Pissed-off residents used to living in quiet, small-town Ontario still complain about the noise every year, and a 2006 search of WEMF’s ingoing traffic in Tweed saw some drug charges laid.

But WEMF has obviously cleaned up. Casey Trudeau, who runs Trudeau Park in Tweed, said the 2006 jam held at his site was actually very organized and had good security. He added cops drove a few city councilors through the grounds, and they just seemed mildly amused by the spectacle.

Despite its refined image and sound, WEMF never completely lost its underground appeal. Friends ask “What’s that?” when I mention WEMF. Once they find out, they get that look in their eye then they want in.

Newbies can expect to be exhausted after 24-hour-a-day music and partying at three to four main stages, and the standard fun and filth that comes with thousands camping in confined grounds. If you’re a nature novice too, WEMF is a good place to get your wilderness badge. Bathrooms and food stands mean you’re less likely to wipe with poison ivy and you won’t starve when your drunk ass can’t start a fire. Don’t forget WEMF’s main appeal: the weirdness. Dustin Shanks, 28, said one year he saw “Busy from Ready or Not onstage playing a set of buckets at 7 a.m.” That’s enough to flip your lid even if you’re not on mind-altering drugs.

When I suggest die-hard WEMF fans might be disappointed at the lack of classic jungle tunes on the first-round lineup, Brown admits it is Dubstep-heavy. But he promises 200 acts from tons of electronic genres – most TBA for now. Brown hopes to have more art and interactive installations this year, and community stages are changing. They used to pop up on their own, but now they’ll be organized prior to the event, to prevent junglists and dubsteppers fighting to drown one another out. Whether old schoolers will like the new setup is yet to be seen.

If this sounds like your cup of electric Kool-Aid, hit up WEMF and take Brown’s advice: “Go around, check out the stages check out the smaller things. Chill out, drink some beers with friends…if you’re 19 or older.” He’s so deadpan when he says that last part, I laugh.