For all Rofo's destructive and divisive influence, his effect has been to force a consideration of who and what constitutes Toronto 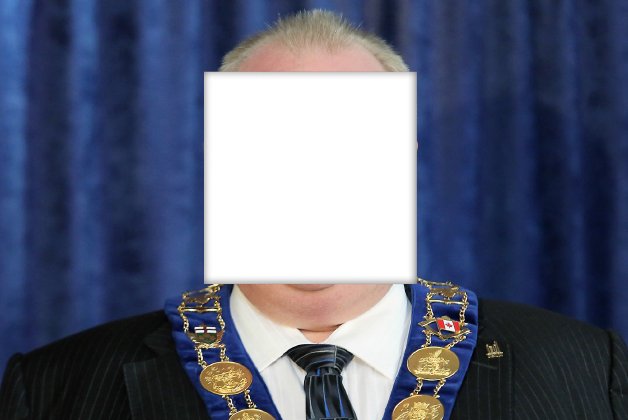 At noon and after on Thursday, May 1, City Hall was still.

And then it was quiet. No running, no chasing, no panting, no sweating. Mercifully, no shoving. With Mayor Rob Ford out of the picture – beginning a leave, safely tucked away wherever – City Hall lost its rampaging centre of gravity.

Whether or not he’s re-elected, Ford will cling to the fringe of our civic consciousness for years. He could get a radio show, a reality show, make paid appearances at nightclubs or just walk around posing for photos as Fred Flintstone used to do at Wonderland. New stories of his years in office, of actions and incidents yet unreported, will continue to emerge even as others pass into legend.

Some of us, out of habit, will keep digging and burrowing in search of new Fordian details to share, hoping to rekindle the collective adrenaline rush of a city on the edge. He and his associates’ legal exploits will disproportionately occupy our social conversations long after we’ve professed we no longer care.

Christopher Hume once wrote of Mississauga Mayor Hazel McCallion that “she has become the personification of a community that otherwise would not exist except on paper, that wouldn’t know itself except as a series of postal codes. She is the thread that holds it together, that provides Mississauga with its history and its meaning, that makes it more than the sum of its parts.”

He didn’t mean it as a good thing.

In many respects, Toronto is a more complicated, varied and diverse agglomeration than Mississauga, and the same is true of our relationship with our mayor. But we are likewise a young, sprawling city in pursuit of defining myths.

Mississauga is straightforward: they adore McCallion and see themselves in her. Ford, on the other hand, connects us not through a common love or a common loathing but a shared adventure and the mess of emotions that go along with it. It’s partly traumatic and partly exhilarating.

So what happens when he goes?

A mayor-based cultural identity is not the most sustainable thing in the world even McCallion is finally retiring.

In mid-December 2012, Ford was spotted in line at Pearson airport headed for places unknown. He was not seen or heard from for a week and a half afterward, and upon his return, his office confirmed rumours that he’d been in Florida. There was speculation he’d been shuffled off to rehab, but no particular indication that was the case.

Two weeks prior, Ford was booted from office by a judge who ruled that he had violated provincial conflict-of-interest legislation. The penalty was stayed pending an appeal that Ford ultimately won.

Earlier that year, his political power had begun to materially dissipate. Ford’s budget and transit plans were shot down by council in defeats that at other levels of governments would be deemed votes of non-confidence.

Toronto, in other words, is long accustomed to a liminal mayor who manages to be absent when present, and vice versa.

He could serve the rest of his term from an undisclosed location and campaign for mayor in absentia, if he wanted, making only the occasional call to the Sun’s Joe Warmington to check in.

In theory, the law should and does discourage this. Under the City Of Toronto Act, “The office of a member of city council becomes vacant if the member… is absent from the meetings of council for three successive months without being authorized to do so by a resolution of council.” (The Municipal Act, which governs the rest of Ontario’s municipalities, has the same clause.)

The thing is that council regularly and routinely excuses members who’ve missed a meeting, for this very purpose. It’s a courtesy that’s practically a procedural formality, introduced at meeting’s end without discussion or debate. In the past year, council has passed seven such motions excusing a total of 21 absences – and were it not for Doug Ford’s dissension at November’s meetings to strip the mayor of his powers, all would have been adopted unanimously.

While it’s certainly possible that a motion to excuse the mayor could become politicized, it’s extremely unlikely that a majority of council would oppose it on any one occasion, let alone three months consecutively.

He could go from mayor-in-name-only to mayor-in-the-abstract, a position he could hold indefinitely and regardless of electoral outcome. It would be a kind of haunting, an eery silence penetrated only by the odd football prognostication.

In 2010, the David Miller years came to a crashing end. Many of his legacies live on, but not necessarily the attitudes that enabled them.

On the ground, that era was distinguished by an up-with-Toronto boosterism. Many who felt affection for Mayor Miller were overwhelmed by a wave of hope for, and pride in, a city whose possibilities were at last being tapped. Toronto, it seemed, had finally come into its own.

In reality, however, the movement was highly concentrated and exclusionary, even as it self-consciously fretted about its own whiteness and downtown-centrism. Miller may have attempted to integrate the suburbs (through Transit City, Tower Renewal, etc), but “Torontopia” was an invigorated urbanism that nonetheless neglected significant parts of the urban landscape.

For all of Rob Ford’s destructive and divisive influence, his effect on the city has been to force a consideration of differences. It is impossible to think about Ford without confronting some kind of otherness (and not always adversarially). Whether you support him or oppose him, he is a reminder that the breadth of this city includes people unlike yourself.

From the ugly, bombed-out wreckage of our political discourse has emerged a clearer picture than ever of who and what constitutes Toronto.

It would be a waste of the Ford years if we returned to our respective geographic nests once it’s done, again trying to live as though amalgamation never happened.

The city Ford governed is not the city he leaves. In his wake is a Toronto that’s seen itself for the first time.