NOW MagazineNewsWhat about the walking wounded?

What about the walking wounded? 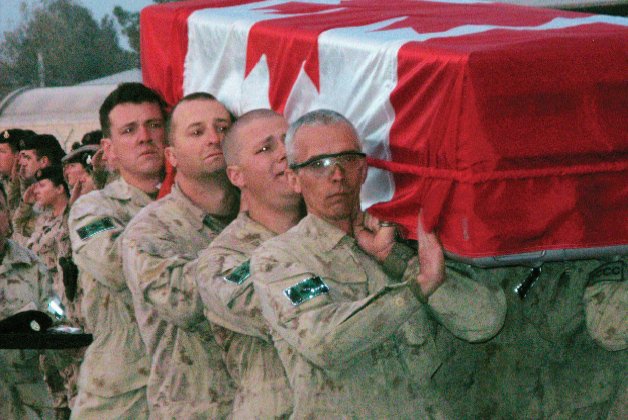 With the Canadian flag now lowered for the last time in Kabul, people may think the casualty count is final.

But the nation has been rocked by news that 11 serving soldiers, most Afghanistan veterans, all diagnosed with post-traumatic stress disorder, have committed suicide in the last four months.

While military brass did their best to downplay the startling rash of suicides by claiming that statistically the Canadian Armed Forces have fewer suicides annually than the general population, that rationale doesn’t add up. Two more soldiers committed suicide this week.

According to most media analyses of the conflict, 158 soldiers were killed and more than 2,000 service members left Afghanistan suffering from physical wounds or injury.

During the 12 years the Department of National Defence (DND) contributed troops to the NATO mission, it’s estimated that some 30,000 Ca-nadian soldiers were deployed to Afghanistan.

But there is a lot of overlap in that number.

For instance, some of the soldiers who were killed had previously been wounded, while other Canadian Armed Forces (CAF) members were wounded more than once on separate tours of duty. The 30,000 figure also quickly shrinks when you factor in the reality that many of our soldiers deployed to Kandahar on multiple six-month tours.

The average number of Canadian troops in the theatre of war – the area directly involved in war operations – peaked at around 3,500 during the combat mission phase between 2005 and 2011.

While all of these contingents were referred to as battle groups, the truth is that less than half the troops deployed were ever sent “outside the wire,” meaning they never left the fortified confines of the sprawling NATO air base in Kandahar.

Very early in the campaign, the Taliban realized they could not defeat Canadian soldiers in a set battle. Our superior technology and firepower made any such encounter a suicidal gesture.

To counter that advantage, the insurgents resorted to constant pinprick attacks using improvised explosive devices (IEDs) and suicide bombers. The vast majority of Canadian casualties were the result of IEDs.

There was no combat in those instances, just an explosion and the resultant rush to provide medical assistance to the victims. It’s this type of warfare that took a tremendous mental toll on our troops.

Those deployed to forward operating bases were in constant mortal danger from an unseen and fanatical foe. When attacks occurred, our combat soldiers bore witness to the grievous wounds and mangled corpses of their comrades.

Most Canadians at home took in the Afghan conflict only through the media reports of embedded journalists. It is difficult for them to understand the horror our combat soldiers experienced.

It isn’t easy for the public to understand why such an alarming proportion of Afghan veterans are suffering from mental wounds, PTSD or operational stress injuries (OSIs) while the federal government is in the process of announcing the closure of veterans’ centres across the country. Angry veterans opposed to the closures butted heads with Julian Fantino, the minister of Veterans Affairs at Parliament Hill in late January to little effect.

In the wake of all the partisan politics and the usual military damage-control tactics, the fact remains that a mental health care crisis is confronting our veterans.

To be fair, it must be acknowledged that the Canadian Armed Forces’ understanding and treatment of OSIs have significantly improved over the past two decades.

In the mid-1990s, when our soldiers returned from the hazardous peacekeeping missions in the Balkans, the CAF was totally unprepared to deal with mental wounds. Again, it was only the embarrassment caused by many of these damaged veterans making their plight known in the media that forced DND to allocate more resources for diagnosis and treatment.

This resulted in a major reform in mental health care known as Rx2000, which significantly improved survival rates for trauma patients treated at Canadian-led field hospitals.

However, after Canadian soldiers experienced extensive combat in Afghanistan in 2006, returning veterans had different issues requiring additional reforms to the plan. Road To Mental Readiness was developed to help prepare troops even before they deployed on combat operations.

As we are now discovering, though, there is no magic cure for mental wounds.

In the close-knit ranks of combat units, where soldiers rely on each other in life-or-death situations, weakness isn’t something you want to exhibit. It is this very warrior spirit that prevents those suffering the most from seeking the care and counselling available to them.

In other words, the biggest impediment to healing our mentally wounded soldiers is the very nature of combat.

13 Percentage of Canadian Forces personnel deployed to the war in Afghanistan who’ve been diagnosed with post-traumatic stress disorder or depression.

“As long as the Government of Canada continues to send Canadian Forces members into harm’s way to protect Canadian interests… then it is morally obligated to provide members and families with a significantly more responsive care capability than that of the average citizen.”

Scott Taylor is a former infantry soldier and founder of Esprit De Corps Magazine. His six unembedded trips to Afghanistan form the basis for his just-released documentary, Afghanistan: Outside the Wire – End Game, which can be viewed on demand at cpac.ca.