What happens in Cleveland…

LAST CALL CLEVELAND appearing at the Toronto Sketch Comedy Festival with Ned and Dave and Vest of Friends Friday (March. 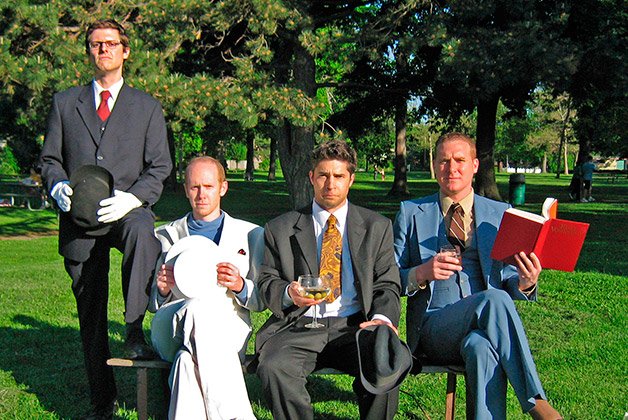 The contingent from south of the border at T.O. Sketchfest includes Last Call Cleveland, festival faves who return in triumph for the first time since winning best of the fest back in 2009. Their two shows at Comedy Bar will allow old fans to finally get another fix of their song-and-skit-fuelled act and the uninitiated a chance to experience this hidden-gem sketch troupe.

Composed of Mike Polk, Aaron McBride, Matt Zitelli and Mark McKenzie, the troupe formed in 1998 when Polk and McBride started a late-night talk show called Last Call while studying at Kent State. Since then they’ve made a name for themselves touring festivals as well as through YouTube videos showcasing the group’s hilarious songs and sketches that have racked up millions of views.

“We didn’t even know it was a competition,” says McBride about winning the 2009 award. “It was a great honour, and we’re still name-dropping it whenever our self-esteem tanks.”

As for their extended absence from the Toronto scene, McBride explains that work and growing families have taken top priority.

“We’ve slowed down way too much,” he says. “It gets harder with every kid, plus we all have day jobs. We still get together a few times a month to rehearse and work on new material, but when it comes to long-term planning, we’re terrible businessmen. We just kinda go with the flow.”

Audiences can expect a mix of old favourites, brand new material and a few short videos from their YouTube repertoire.

“We like to offer a multimedia experience,” says Zitelli. “People love the videos, which helps us because we use an unnecessarily large number of costumes and props. So while they’re playing we’re getting changed and setting up the next skit.”

One of the group’s best-known bits is a series of mock tourism videos, initially posted to YouTube, that play up Cleveland’s lacklustre reputation. Their viral popularity actually prompted a serious response from the real Cleveland tourism board. But even though they joke about their hometown, they’re not about to move.

“On tour we sometimes play ambassadors from Cleveland trying to convince people to move here, and of course we’re actually describing how lame it can be,” says Zitelli. “But on the real side, we love it. In Cleveland, everyone understands the reputation and why it’s a joke, but part of the mindset is embracing our role as underdogs. People here are tough!”

McBride says the group is excited to be back in Toronto.