What is Wilf Dinnick doing?

OpenFile has all-but shuttered its site and owes freelancers money, but you'd never know by its founder's recent interview 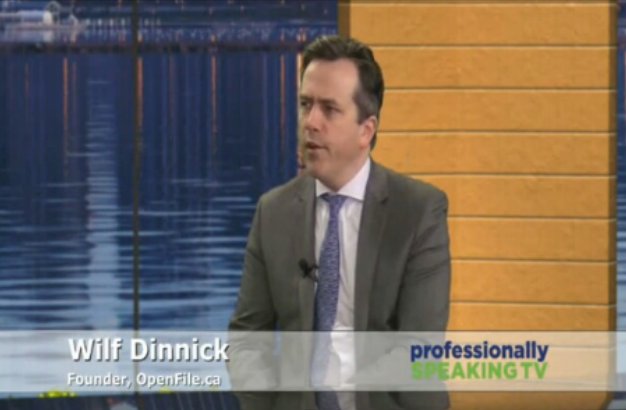 “We’re not shutting down,” site Founder Wilf Dinnick told the Globe And Mail, but rather taking “a week or two” to “work out some details.” Dinnick, like a less self-assured General MacArthur, also told the paper he “expect[s] to be back pretty soon.”

Now, nearly six months later, OpenFile remains (per its homepage) “on hiatus.” Moreover, it owes freelancers an estimated $20,624, a total tallied at by former OpenFile Toronto editor David Topping, who has been in touch with the site’s contributors and has taken it upon himself to hold Dinnick responsible for twisting out of remuneration obligations with talk of “hiatus” and being “on pause.” (N.B.: I am both personally acquainted with Topping, having worked for/alongside him in various capacities in the past, as well as a former OpenFile Toronto contributor, though to my memory my invoices were always paid punctually and in full.)

“The biggest thing that was disappointing about this,” says Topping, “was that OpenFile built its reputation on being very good to freelancers. It was always supposed to be a publication that paid freelancers decently and treated them well. When I was there, that was a big, important part of how everyone saw it. For that to go so wrong at the end was so disappointing. It just kind of made me a bit angry, and a bit sad.”

OpenFile’s “community-based” model relied on stories generated by readers, and investigated by a pool of freelancers, who were rewarded with rates that were generous by online standards, and more-or-less commensurate with daily print rates. (In 2010, in OpenFile Toronto’s infancy, I was compensated $200, the flat rate at the time, for a piece on the closure of furniture mega-store Idomo something I mention not out of boastfulness or anything, but rather to give a sense of the site’s competitive pay scale.)

Perhaps such bounty was bound to exhaust itself, as OpenFile made headway into other smaller markets like Hamilton and Waterloo, accompanied by a paucity of revenue-generating web ads. Now, an organization that muscled into the online journalism scene in 2010 with an assurance of treating freelancers fairly owes them all kinds of money.

So what in god’s name is Dinnick doing appearing as recently as last month on a web-series called Professionally Speaking TV, preaching his journalism/business model as if its something other than shuttered/busted?

Last week, a video cropped up of Dinnick in conversation with Randall Craig (host of Professionally Speaking TV, a thing I hadn’t heard about until this video came to my attention). Dinnick talks with frustrating, factually incongruous candor about his commitment to freelancers, how OpenFile serves local communities, and how he’d even like to start a print version at some point (“I think that’s smart,” he says on the topic, effectively contradicting his own low-overhead business model).

As Paul McLeod, Ottawa Buruea Chief for the Halifax Chronicle Herald put it on his blog, the video is like a “window to an alternate reality,” one in which Dinnick is talking about his publication as if it’s still 2010. And given Professionally Speaking TV’s rink-a-dink production values, you might easily confuse it for late night cable access circa 1991. Host Craig (who pronounces “reportage” as reportaaahge) brings up the issue of “possible futures” midway through the interview. It might as well be a title for the piece itself – as if Dinnick were being beamed in from some elseworld spinning slightly to the left of our own.

“The first thing I thought when I saw this video was, ‘The date on this must be wrong,'” says Topping. “I also don’t know why Dinnick would give an interview like that, but not get back to any of the questions I sent over e-mail. I don’t get what would compel a professional journalist to answer questions like that, but not get back to me or anyone else within mainstream media.” (Dinnick did not reply to our request for comment, either.)

Despite the sneakiness, fraudulence and out-and-out weirdness of the interview (Dinnick squirms like a smooth-talker in a David Mamet play who doesn’t even buy what he’s selling) it’s easy to want to railroad the would-be digital media revolutionary as, well, a sneak, a fraud and an out-and-out weirdo. Watching it, it’s hard to not to imagine Dinnick leaning over after the cameras have flicked off and whispering, “Pssst, we’re closed.” But Topping retains his good faith that people will get paid out. “I wouldn’t characterize it as lying. It just seems to me that there’s been some stalling. And a lot of miscommunication.”‘

What rankles is the disjoint between Dinnick’s lack of transparency with his (former) contributors and his mock-openness with the host of a homespun “online, one-hour, one-on-one weekly interview with the nation’s thought leaders.” To his credit, Craig later amended his interview with a clarification stating that at the time it was conducted, “we had no idea that Openfile was on the verge of closing, nor that there were issues relating to their payments to their writers.”

Whether or not Dinnick gets these people paid is one thing. It seems like an established journalist/publisher like this could feasibly go out-of-pocket on $20,000, if indeed OpenFile’s mysterious financial pool has dried up. Harder to imagine is that he’ll be able recoup his readership, who have likely scattered to other comparable publications during the site’s extended hiatus. Or that he’ll be able to salvage his reputation, having now exposed himself so completely in an interview he may have expected to fly under the radar – a ludicrous assumption for an online publisher in the age of Google Alerts, or Google – while evading requests from other media outlets, as well as those lodged by his own former editors and contributors.

Whatever the case, Wilf, you owe everyone an explanation. And do up your collar button while you’re at it. This is Professionally Speaking TV, not a Heineken Premium Light commercial.

Update (2/27/13 3:10 pm): Dinnick contacted me shortly after this piece was published to clarify a few issues. For one, apparently e-mails sent to his @openfile e-mail address no longer reaches him, as the server’s been suspended. Dinnick said that when he signed on for the Professionally Speaking TV interview, he told the producer that the site has been suspended, but both parties proceeded regardless.

“I was approached in December, and told the producer it was not operating,” he says. “My understanding was that we’d talk about the ideals of OpenFile.”

As far as those ideals conflicting with OpenFile’s reality, in the form of unpaid freelancer invoices, Dinnick states that “the cheques are in the mail.”

“I’ve had the conversation with anyone who has outstanding invoices,” he says. “I can’t go into the nitty-gritty, but the issue is being dealt with…For two years we ran, paying the best rates in the business. Now we’re paying, but we’re paying late.”

As OpenFile is a privately held company, Dinnick is certainly under no obligation to get into the nitty-gritty, but assured me that he’s “not out doing this to get rich. I don’t like being harassed on Twitter, but I’m willing to take the heat.”

As far as the future of the website, Dinnick states thet he’s “been approached by several people about partnerships,” but again, can’t get into the details.