To honour missing and murdered indigenous women at Toronto Police Headquarters at 40 College, Friday, February 14. The group marched to the 519 Church Street Community Centre for a feast. 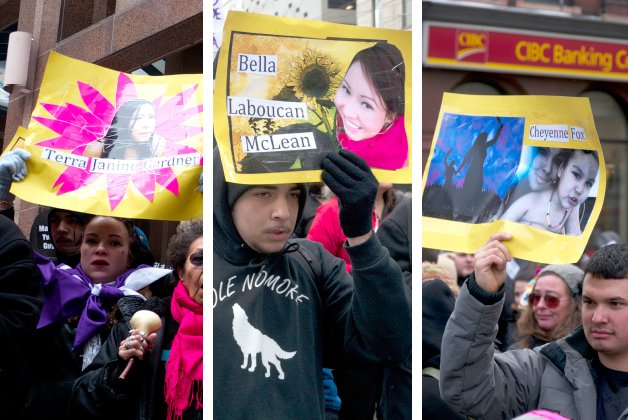 Terra Janine Gardner, 26, was killed by a train near Yonge and Summerhill on May 14, 2013. Gardner was homeless and reportedly receiving threats prior to her death. A witness in a murder trial at the time, she was originally from Nigigoonsiminikaaning First Nation near Fort Frances, Ontario.

“I saw Terra, with her little crooked smile, two days before she died. She knew I had been in recovery and had found sobriety, and she was still on her journey. I looked her right in the face and said, ‘Terra, some of us really love you, some of us really love you.’ I took her breath away, we hugged, and I gave her what I had to give – and 24 hours later she was on the news.

“Where were the police? She told anybody who would listen that she was afraid [for her life], and look at the result. How do people state they are afraid and get no support? It was [police’s] job, if they had expectations [she would testify], to help her.”

September Stonechild lived with Gardner at Second Stage Housing in Parkdale. They were the first two women to move into the halfway house.

Bella Laboucan McLean, 25, fell from the 31st floor of a downtown condo at 21 Iceboat Terrace on July 20, 2013, during a party. Twelve hours after her death, a man phoned police from the condo unit to report her missing. Police are treating McLean’s death as suspicious but have yet to talk to everyone who may have been in the room at the time of her death. McLean was from Sturgeon Lake Cree First Nation in northern Alberta.

“Bella moved here four years ago to go to school. She wasn’t like most people I knew because she didn’t carry any of that dark that so many of us wind up carrying. Someone who has that kind of light attracts things that may not be so light.

“I think about her last day here, and it makes me so upset that she was with people who didn’t see her as a human being. That’s the hardest part, because she was trying to expand her horizons and find new people she could connect with, and unfortunately she wasn’t in the right space and place. These people, whoever they are, who would not call in this tragedy for another 12 hours…. I’m sorry, she falls from a balcony…. You heard it, the neighbours heard it. You know what’s happening.”

Cheyenne Fox, 20, fell from the 24th-floor of a Don Mills housing tower on April 25, 2013. Two witnesses from the apartment below reportedly saw her dangling. Toronto police told Fox’s father that her death was a suicide. She was originally from Sheguiandah First Nation near Manitoulin.

“We met with the police three times since April 25. They ruled Cheyenne’s death a suicide maybe eight hours after she passed on. She died at 10:30, and they were at my door at 8 o’clock the next morning, so there was really no investigation at all as far as I am concerned, and they basically closed the file last November.

“This issue is not going away for my family and for the women.”

More than 582 aboriginal women are missing or were murdered in Canada, most in the last 10 years, three of them killed in Toronto in 2013. Prime Minister Stephen Harper has said he is “skeptical” about the need for a national inquiry. Still, a number of native groups are calling for one.

“The police have responded the same way they did in BC to Robert Pickton in 1992. Not much has changed – they under-investigate and draw conclusions.

“As an organization, we don’t look to the state for solutions, so we’re actually not part of the calls for an inquiry. We would support [an inquiry] with international oversight, but we don’t have that much faith that would be any different from the sham that happened around the Pickton trial. The good thing that came out of [that trial] was the creation of a civil-society coalition that was really the force that brought exposure to the issue.”

“We need the 96 per cent of Canadians not from an indigenous background to understand the history, the culture, the rights and particularly the intergenerational impact of residential schools. We are all treaty people and we must all honour those treaties. I think Canadians are starting to understand that if fairness is our core Canadian value, then this is the greatest social justice issue in our country.

“When we struck the special committee on missing and murdered [indigenous women] in Parliament, one of the things nobody seemed to understand was that the murder clearance rate for Canada is about 84 per cent. If the victim is an indigenous woman or girl, the clearance drops to 50 per cent. This is unacceptable.”