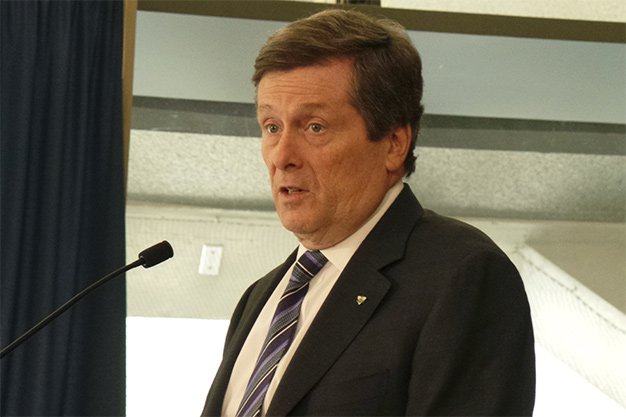 In the end, it wasn’t about Uber. For many councillors — including those who spent years loudly inveighing against the San Francisco tech company — it may never have been about Uber at all.

For others, this realization came too late, toward the end of Tuesday’s day-long debate that resulted in the legalization of private “ride-sharing” services and the dismantling of recent taxi-industry reforms. These changes, together, put cab drivers in a place of unprecedented precariousness.

The city’s stated aim had been to level the playing field between taxis and Uber, by loosening standards for the former and tightening them for the latter. And while that technically is what Council accomplished, the effect was to drive the industry down to Uber’s level.

Council chose, for example, to allow taxi companies to offer discounts on standard rates. But they also voted to allow those companies to force drivers to swallow the difference, which Councillor Shelley Carroll compared to Starbucks having their baristas put $5 in the cash when you redeem a free drink on your birthday. And if you’re inclined to say, “Well, it’s good for consumers,” then you should probably also know that Council voted to allow taxi companies to engage in Uber-like surge pricing for rides booked through an app. (Have fun getting a cab through conventional means when there’s more money to be made from an app call.)

So how did Council get here? Like everything to do with the issue, it’s a convoluted mess, with a mind-numbing assortment of conflicting and overlapping interests. But breaking it into simple terms:

Well before Uber arrived in Toronto, there was already a war in the city’s cab industry. On one side were owners of standard taxi plates, a large portion of whom weren’t themselves drivers. Because the city only allowed a finite number of these plates to exist, they accumulated enormous value and turned into commodities that could be bought and sold and even bequeathed in wills. They were business licenses operating at an abstract level — the ownership was essentially arbitrary, and possessing one was permission to profit off the labour of others. It was a perversion of the city’s original intentions and a situation that Council spent nearly two decades trying to repair.

On the other side were owner-operators: people who both owned plates and drove. The Ambassador taxi plates, in particular, required their owners to be the exclusive driver.

After years of hard-fought effort, Council voted to overhaul the system in 2014, moving toward a single class of plates. The goal was to gradually shift power from owners to drivers and make the whole setup a bit less exploitative.

Standard plate owners and cab companies were pissed. But when Uber came around, it appeared that the various taxi factions were willing to put aside their differences, at least for a moment, in order to face down a common foe. Kicking out Uber, the illegal interloper, would be the new priority.

Some councillors — namely Jim Karygiannis and Giorgio Mammoliti — built personal brands around screw-Uber chest-thumping. Others worked quietly behind the scenes on new rules to raise the city’s standards for drivers and vehicles, hoping to set a reasonable bar that Uber’s business model might not be able to meet.

Last month, city staff proposed a new ground transportation bylaw for the whole sector. The idea was to legalize Uber and similar “Private Transportation Companies” (PTCs), putting new rules on them and relaxing others for taxis. But the cab industry and many councillors felt the recommendations were excessively favourable to Uber, would establish a two-tier system, and compromise safety. And beyond that, the report asked to reverse several 2014 reforms, returning power to the hands of plate owners.

Mayor John Tory backed the staff recommendations, but his handpicked chair of the Licensing and Standards Committee, Cesar Palacio, did not. In mid-April, the committee gutted the report, removing all sections that would have legalized Uber — but leaving the parts that undid the 2014 changes. City staff wanted to help plate owners withstand competition from Uber. But the committee wanted to help plate owners and expel Uber. (Some committee members, it might be noted, received substantial contributions from taxi plate owners in the last municipal election.)

Shortly after, the Mayor’s Office got in touch with Council’s left-wing bloc to hammer out a solution. If the mayor didn’t have the support of Palacio and other centre-right councillors, he’d need extra help getting something through on which he could claim victory.

Over the next week or so, the Mayor’s Office and the left came up with a compromise package of motions that would have harmonized vehicle and driver rules for taxis and PTCs. According to a draft summary dated May 2 and obtained by NOW, it would have also asked Council to “pass a motion requesting the Mayor to speak to the Premier regarding precarious work in the taxicab industry and potential reforms to the Employment Standards Act to address the issue.” More concretely, it also instructed the City to manage the number of PTC vehicles allowed on the road based on a supply-and-demand study of the effect on full-time cab jobs.

But at the very last minute — the evening before the meeting, in the middle of the night, or late in the morning, depending who you talk to — the deal came apart. There’s disagreement over how and what triggered this, but it may have been as simple as a series of miscommunications.

The Mayor’s staff thought (or perhaps were eager to believe) that the deal with the left was no longer a sure thing at some point in the 24 hours preceding the meeting, they struck up parallel conversations with Council’s right flank. They carried on with both blocs nearly up until the lunch break, at which point they opted to go with a new bundle of motions cobbled together with the right. It may or may not have been the superior bet, but it was certainly closer to the mayor’s own ideology and saved the embarrassment of his committee chairs voting against him. It was evidently easier to create a new package that catered to the interests of his usual allies than it would have been to bring them aboard the deal with the left.

“You would understand that the one outcome that I could not come out of this meeting with.…was no result at all,” Mayor Tory told reporters the next day. He was worried that Council might have voted to receive (i.e., kill) the item, leaving the status quo in place. 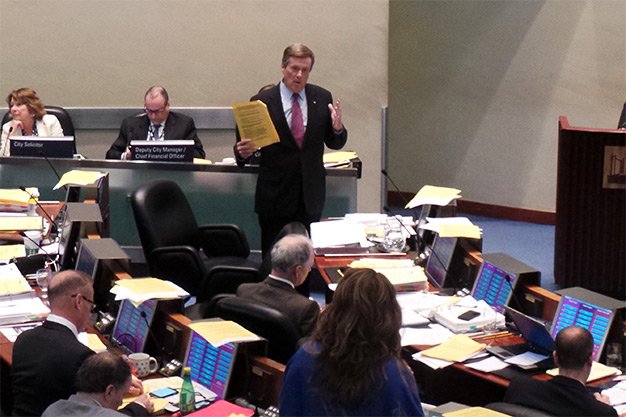 When the mayor introduced his Council motion at 3:44 pm, it was a 20-page behemoth whose hasty provenance was apparent — like a rough draft pasted together on deadline. He was stunningly unfamiliar with its contents and struggled to answer questions during a two-hour grilling on the Council floor.

Not only did the motion legalize Uber, it doubled down on disbanding the 2014 reforms, offering up additional gifts to plate owners. It asked for a report on the feasibility of lowering renewal fees by 75 per cent and “establishing a transition fund for taxicab plate owners [whose] investments have been negatively impacted by new market entrants.” It even failed to restore a staff recommendation to accelerate the taxi industry’s conversion to accessible vehicles.

Nearly all of it sailed through, with a notable exception being a vaguely cruel clause forcing drivers to work for just one brokerage or platform at a time. (Tory’s motion also contained vestiges of his deal with the left, including a watered-down nod to supply management.)

Repeatedly accusing the left of trying to cut a “secret” deal with Tory’s office, Mammoliti used the bluster as cover for his own imminent support of the mayor. He and Karygiannis, always so vocal about about their hatred for Uber, ultimately tossed those concerns out the window sure, they’d love to eject the company from town, but their efforts were first and foremost about protecting interests of plate owners. Given an opportunity to do that, they took it.

The mayor, on the other hand, was proud of the pragmatism that steered him from one stance to its opposite in the course of a few hours.

“I had to make sure that I had the number of votes necessary — as you do on every issue every day around here — to pass something,” he said on Wednesday.

That’s true enough. But left to his own devices, Tory will typically drift to the right, carried along by his abiding faith that capitalism will work itself out.

Asked by reporters how surge pricing in the taxi industry serves the interests of customers, he explained that “consumer protection rests in the marketplace.”

At this point, so too does the well-being of drivers.