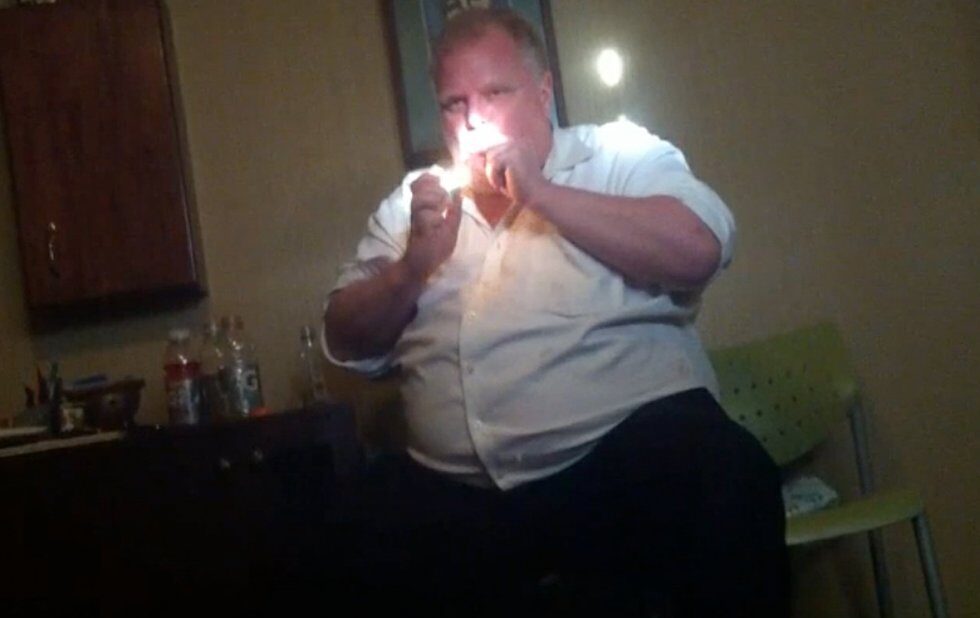 Virtually every media outlet in Toronto has had a copy of the (first) Rob Ford crack video since March 2015. It was presented as evidence at the preliminary hearing for Alexander “Sandro” Lisi, the late mayor’s former friend and driver who was charged with extortion over his May 2013 efforts to obtain it. But like everything at the hearing, it was placed under a publication ban to protect Lisi’s fair trial rights.

This morning in Superior Court, however, the Crown withdrew the charge. And because the trial set for next month is no longer going to happen, all of the evidence introduced at last year’s preliminary hearing is now totally publishable, including witness testimony, wiretap recordings, and yes, the crack video.

In light of Ford’s passing, very little of the material is earth-shattering, though some of the recordings involving the saga’s secondary characters are very, very funny. It will suck up one day’s news cycle, not two.

But you want to know about the crack video. Visually, it’s exactly as described in the initial reports from Gawker and the Toronto Star. Wearing a partly unbuttoned white shirt, Ford sits with sunlight streaming on to his face, trying and eventually succeeding in his efforts to light and inhale from a crack pipe. According to testimony from Elena Basso, the off-screen voice in the video whose house it was shot at, the crack was not very good.

In terms of what is actually said in the video, however, both of the original stories were sadly off the mark. The outlet’s respective reporters viewed the recording under challenging conditions, doing their best to commit as much as possible to memory. Gawker saw it once and the Star saw it three times. So it’s not surprising they were paying more attention to what they viewed than what they heard.

Here are the key discrepancies:

What Gawker wrote: “A slurred voice off-camera is ranting about Canadian politics in what sounds like an attempt to goad Ford.”

What the Star wrote: “…the voice raises the name of Liberal Leader Justin Trudeau. The man says he can’t stand him and that he wants to shove his foot up the young leader’s ‘ass so far it comes out the other end.’”

What the video shows: Close. The off-camera voice belongs to Elena Basso, who confirmed this in her testimony. And what she actually said was, “I’d like to get that fucking Justin Trudeau and shove my foot as far up his ass, ‘cause I’m sure it goes real far… I’m sure my fucking, it’ll tickle his fucking nose hairs with my foot, up his ass.”

What Gawker wrote: “‘Pierre Trudeau was a faggot!’ is the one phrase [said by the off-camera voice that] lodges in my mind.”

What the Star wrote: “Ford nods and bobs on his chair and appears to say, ‘Justin Trudeau’s a fag.’”

What the video shows: First off, they were talking about Justin Trudeau, not his dad. And if anyone used a homophobic slur, it was Ford and not Basso. But where it gets tricky is determining what he actually said the video is frustratingly inconclusive in this respect. The then-mayor mumbles a word that he could very well have meant to be “faggot,” but he seems too fucked up to properly articulate the consonants. Therefore, it’s difficult to state with any confidence that Ford does or does’t say it. Further confusing things, he follows that up with an observation that the Liberal leader has or is a “fat dick,” waving two fingers on his left hand in an apparent attempt to illustrate the point.

What the Star wrote: “ A man’s voice tells him he should be coaching football because that’s what he’s good at.”

What the video shows: You could possibly read that into the comments, but it’s a bit of a stretch. Basso brings up the things that are important in Ford’s life, beginning with seems to have been a reference to his actual children, before moving to discuss the players he coached at Don Bosco Catholic Secondary School: “Your kids are important to you. That’s what drives you, baby, that’s what… That’s why we love you… Your children, your family, your kids. Your fuckin’ footballers. Your kids who play football. That’s what drives you. Family, kids, your fuckin…”

What the Star wrote: “…he appears to say (though he is mumbling), ‘they are just f—ing minorities’ .… He says something like ‘Yeah, I take these kids . . . minorities’ but soon he rambles off again.”

What the video shows: After Basso says, “That’s what drives you,” Ford responds, “Fuck, just drivin’ the minorities, dude.” The word after “fuck” is a bit unclear, but regardless, his remark is different than previously described. That is, he did patronizingly refer to the players he coached as “minorities,” but he didn’t dismiss them as “just fucking minorities.” This is much more consistent with Ford’s brand of racism, which typically manifested as condescension rather than contempt.