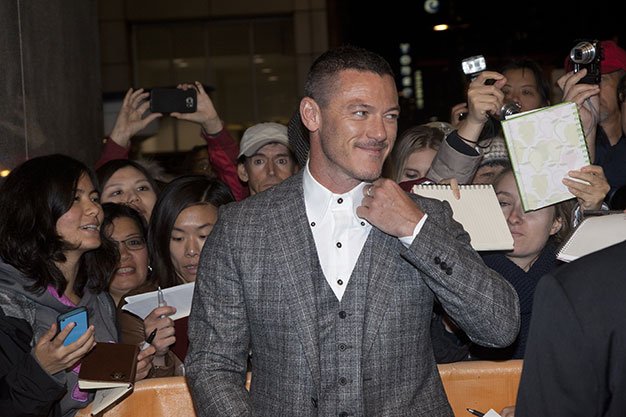 Ben Wheatley’s adaptation of J.G. Ballard’s High-Rise is stuffed to bursting with sex and violence. All the excesses and class tensions of 70s England are jammed into a single apartment tower and set to boil over. The day after the film’s world premiere at TIFF, I sat down with Wheatley and co-star Luke Evans, who plays a lower-floor resident jealous of the high-class tenants played by Tom Hiddleston, Elisabeth Moss and Jeremy Irons.

Debauchery is no fun at all

Staging the movie’s slide into chaos was just a lot of work. “It’s really, really hard, and it’s really dull,” Wheatley says. “It’s a lot of worrying about how many bags of rubbish are in the corridor. It’s massive headaches for the art department – there’s a lot of repainting of walls and distressing of stuff, and crazy amounts of costumes that are slowly coming apart. It’s a testament to the continuity team and costume and makeup and the art department that I got to the edit suite and there was no trouble with it.”

Some adjustment was required of the all-star cast

“I’d come off Dracula Untold,” says Evans, “a big movie, where you’re used to working at a slower pace. Set pieces have to be reset over a few hours or whatever.” On High-Rise, though? “We were doing, like, 10 to 15 scenes a day. Sometimes two or three takes, sometimes just one. As soon as he got what he needed, we moved on.”

The sets and costumes weren’t the only things coming apart

Evans spends half the movie regressing into a primitive -alpha male bent on dominating his neighbours. But the character has a pretty high level of testosterone to begin with – “like, eight or nine for me,” Evans says – which meant he still had a long way to go. “I realized that I would have to make my top number 20 because I was having to go further and further,” he says ruefully. “I didn’t envy him a bit of it,” Wheatley laughs. “It’s really easy to say ‘Do that,’ and then, when you see it unfolding, you just go, ‘Fucking hell.’”

It’s not that extreme

While he agrees that High-Rise is an intense experience, Wheatley doesn’t think the film is especially difficult. “I went to see [Hardcore Henry], which is at a completely different scale,” he says. “People kept saying that A Field In England was really difficult, and I was thinking, ‘Have you not seen any Tarkovsky stuff? Or Béla Tarr stuff?’ I mean, this is what hardcore world cinema is.”

Don’t miss our High Rise review here and get movie showtimes over here.