NOW MagazineNewsWhat’s the more eco-friendly choice, buying a new book at a local bookstore or a used book online that gets shipped from around the world?

What’s the more eco-friendly choice, buying a new book at a local bookstore or a used book online that gets shipped from around the world?

Q: What's the more eco-friendly choice, buying a new book at a local bookstore or a used book online that. 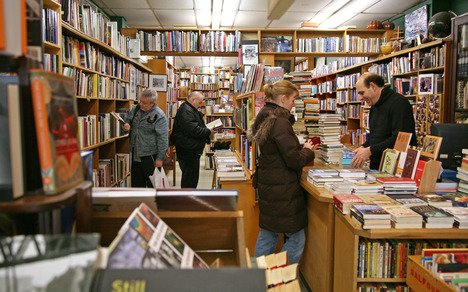 Q: What’s the more eco-friendly choice, buying a new book at a local bookstore or a used book online that gets shipped from around the world?

A: Remember when you couldn’t walk an urban block without stumbling upon an independent bookstore (new or used)? Sadly, I’m sure I was wearing plaid and listening to Pearl Jam at the time.

We even had a whole indie-book ‘hood on Harbord in the shadow of U of T. But on that street and others across the continent, the mom-and-pops are going the way of the dodo.

With a few treasured exceptions, the ones that still have doors to open tend to sell used textbooks to students, rare books to collectors or, like BMV, sell a lot of new “remainder” books (publisher extras sold at cutthroat prices.)

Now, if you’ve scoured all your remaining local second-hand shops (by phone or foot, of course) and just can’t find a copy of Suzanne Somers’s 1998 autobiography or that hot thriller on the evolution of the conservation movement, should you order it online?

It all depends on where you order it and who you ask about it. When Amazon first started selling used books online, the Authors’ Guild protested the company’s used book selling practices to the point that the org boldly asked its authors to de-link from Amazon on their websites. Why? Well, it’s not that the Guild is opposed to used book sales, just the aggressive marketing of used copies of brand, spanking new books.

Amazon was and is, they felt, undermining their authors’ ability to earn a living by promoting a cheaper used version of a book at the precise moment the shopper is mulling over whether to pay full price, placing the “buy used” button right next to the “buy new.”

Amazon flat out refused to change its layout practices, and that was that.

Other large online book vendors like BC-based Abebooks.com managed to avoid the cussing and spitting of most authors since readers have always gone to Abe primarily for used books. Thus it wasn’t sale-stealing (though these distinctions are pretty much moot since Amazon bought Abe a year and a half ago).

By the way, whether you buy pre-read from Abe or Amazon, about 75 per cent of that money goes to second-hand book stores and individual sellers in their network.

Punch in Marley And Me on Abe and, bam, a list of bookstores world-wide (from Bridgend, UK, to El Paso, Texas) unfurls on your screen. You can and should, ecologically speaking, narrow it down to pick the vendor closest to you. That means you might have to suck up a higher price to get the book from 200 kilometres away instead of 2,000.

Your question still stands, though: if you can only find that Suzanne Somers book in BC or Boston and you live in the burbs of Toronto, is it better, ecologically speaking, to buy it new or to have a used version trucked in?

Well, if you calculate the full carbon cost of making a conventional virgin paper book (from logging, milling, binding, printing, distributing and retailing it), as the Green Press Initiative did, you’ll find that the average book has a CO2 footprint of 9 pounds.

Since only 2.5 per cent of that comes from distributing that book (via air, ships and trucks), Todd Pollak at the Green Press Initiative gages that buying the trucked-in used book is likely greener. Though he notes that if books were made with 100 per cent recycled content and the mill used reclaimed biogas – like, say, Ecoholic and Ecoholic Home do, ahem – new books wouldn’t fall so far behind.

They, in that case, avoid run-of-the-mill wood harvesting and paper processing, which add up to a whopping 89 per cent of a new book’s carbon tally.

Speaking personally, supporting my local indie bookstore, used or new, would be my top priority, since sustainability does run deeper than carbon footprint.

True sustainability pulls from the viability of local communities, the vibrancy of local culture, the vigour of curious minds – and nothing feeds all that quite like meandering through the stacks of your neighbourhood independent and picking up the unintended.