NOW MagazineNewsWhat’s the deal with those Ford-produced Flag Day signs popping up around the city?

What’s the deal with those Ford-produced Flag Day signs popping up around the city?

"Tomorrow is Flag Day," Rick Mercer would say, setting up one of the worst jokes in the history of modern. 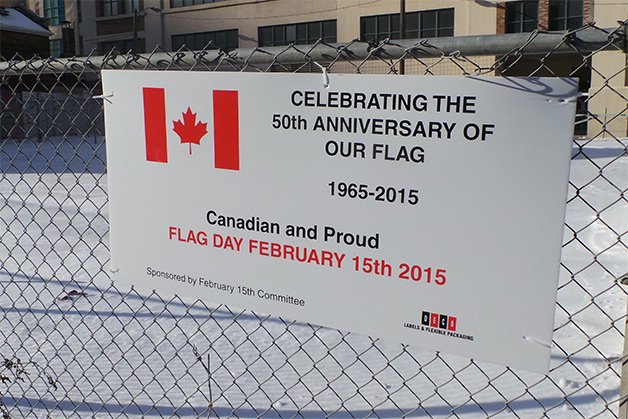 “Tomorrow is Flag Day,” Rick Mercer would say, setting up one of the worst jokes in the history of modern Canadian broadcasting. “Settle down, Stephen Harper: I said Flag Day.”

That mind-numbing travesty, burned into my head through incessant ads for Mercer’s eponymous Report, was until last week the only thought I had ever given to the anniversary of Canada’s flag.

And then mysterious banners for the occasion began popping up on fences around the city:

In the bottom-right: a logo for DECO LABELS & FLEXIBLE PACKAGING, the company co-owned by the three Ford brothers and of which ex-councillor Doug is president.

One of the 120-by-60-centimetre plastic signs was spotted in Parkdale, on Queen West at Close. Another showed up near the NOW offices, at Dundas and Mutual. There’s a third in Regent Park.

Ted Van Vliet, manager of the unit charged with enforcing the city’s sign bylaw, says in an email that they haven’t received any complaints about the placards, but that based on the photo I sent him they appear to walk “a line between a sign and a free/political speech type of message.” If they were determined to be “signs” for the purpose of the bylaw, they’d be illegal, given that attaching signs to fences is prohibited.

The larger question, of course, is who is behind them? What is this “February 15th Committee” that Google seems to know nothing about, and what’s their connection to the Fords?

Some further web searching led to a message about last year’s Flag Day collected on a random junk-aggregation site. It was signed by Chris Korwin-Kuczynski the former councillor, current lobbyist, and Ford family friend identifying himself as the chair of the February 15th Committee. So I gave him a call.

“Yeah, what we did is we put up a bunch of signs,” he says. “You know something, for the last year we sent thousands of emails across the country and encouraged Canadians to celebrate, in whatever way they could, Flag Day.”

K.K. (as he’s often known) describes himself as a proud nationalist who feels that the federal government “dropped the ball” on celebrating this part of Canada’s history, especially given the money they’ve lavished on War of 1812 and John A. Macdonald commemorations. So he took it upon himself to promote the anniversary and organize events in conjunction with the Lakeshore Village BIA and McCormick Arena, on whose boards of management he sits. On Lake Shore, residents were invited to sign a banner to be sent off to the national archives.

“We have a karaoke competition on the street,” he says.

So how many of those signs did he erect?

“Oh, a couple hundred. We just went different places we went across the city of Toronto and put them where we could and very quickly, just as an awareness campaign for Canadians, that’s all.”

And why do they have a Deco logo?

“Because the Fords actually, they gave it to me for nothing.”

In other words, Ford-printed Flag Day signs are blanketing the city because they were doing a favour for their patriotic pal. In case you wondered.