NOW MagazineNewsWhat’s wrong with this picture?

What’s wrong with this picture? 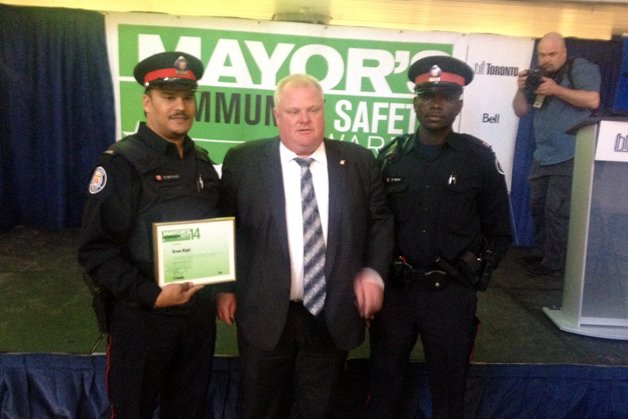 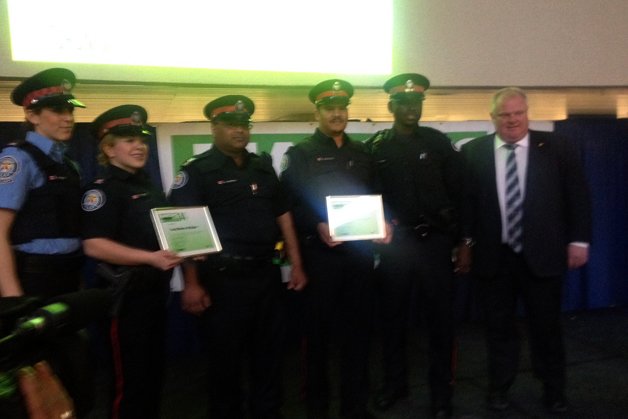 Rob Ford finally found himself sandwiched between two police officers on Thursday, but it wasn’t the scene so many Torontonians have envisioned since reports of the mayor smoking crack surfaced 11 months ago.

Instead of being led away in cuffs, Ford was with police at City Hall to give out the Mayor’s Community Safety Awards. According to a city press release, the awards recognize organizations that, among other things, “help victims of crime,” “reduce violence within high-risk communities,” and “promote the safety of neighbourhoods and communities,” including LGBTQ communities.

Ford has, of course, admitted to using crack cocaine, is good friends with accused drug dealer Sandro Lisi, and was taped smoking what appears to be crack by men with alleged ties to the Dixon City Bloods gang. He’s also openly feuded with the chief of police, accusing him of carrying out a politically motivated vendetta against him for launching an investigation into all that crack stuff.

The Toronto Police insist the mayor is still the target of an open investigation related to the video.

But none of that seemed to faze either Ford or the police officers in attendance, who gamely posed for photos with the mayor. Ford told the officers, “I support you guys, a hundred per cent.”

As he left the ceremony, the mayor was peppered with questions, none of which he answered. They included:

Why have you never been to the Mayor’s Community Safety Awards before?

Why are you here when you opposed community grants?

Do you think it’s appropriate that you’re here giving out the Community Safety Awards when you’re connected to the Dixon City Bloods street gang?

The mayor did, however, compliment a man’s shoes on the way to his office.