NOW MagazineCultureComedyWhat’s your favourite sketch of all time?

What’s your favourite sketch of all time?

Laura Salvas (left): The sketch that makes me laugh hardest is Mr. Show's The Story Of Everest, which is essentially. 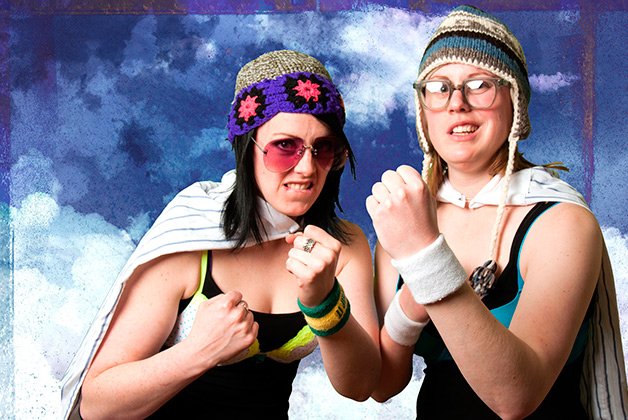 Laura Salvas (left): The sketch that makes me laugh hardest is Mr. Show’s The Story Of Everest, which is essentially five minutes of a guy repeatedly falling into a wall of thimbles. I always try to come up with smart, relatable premises for our sketches, but when it comes down to it there’s nothing funnier than someone falling – a big reason why I love the winter Olympics.

Mandy Sellers: My favourite sketch of all time is The Judy Miller Show from Saturday Night Live, where Gilda Radner plays a hyper Brownie finding stuff to do in her bedroom while her mom plays bridge. My aunt and uncle had it on VHS when I was a kid, and my sisters and I would literally fall on the floor laughing. Gilda and that sketch are the reason why I got into comedy. I became a huge SNL nerd and dreamed of one day being on the show.

Two Weird Ladies perform at Sketchfest tonight (Thursday, March 6), at the LOT, and March 13, at the Comedy Bar. They’re part of SketchFest’s Cabaret Series, Friday (March 7) and March 16 are on Teh Internets Quiz Show, March 14 and headline The Jokebox, March 28, all at the Comedy Bar.

Filip Jeremic (left): My all-time favourite is the final one in the Elaine Figgis series of sketches on BBC’s The Catherine Tate Show. Elaine is a lonely, unloved but utterly optimistic woman with a passion for online dating who dates one nightmare of a man after another. In the final sketch she meets (the real) Daniel Craig, and he just isn’t good enough for her. I adore it because it’s super-clever, totally witty and full of great satire.

Allana Reoch: My favourite sketch is a song called Sometimes I’m Happy, by Dean Martin and Jerry Lewis and the Norman Luboff Choir. It’s such a simple and dumb premise: Dean attempts to sing a song in front of an overzealous backup choir. But the execution and artfulness, combined with such a great funny-guy/straight-man contrast is everything I love about sketch comedy. Plus Dean Martin: what an old-timey babe!

British Teeth perform at Sketchfest tonight (Thursday, March 6) and March 12 at the Comedy Bar and Saturday (March 8) at LOT.

It’s a tie. I love so many of the scenes I did at Second City: MSN, about a mother pretending to be her son in an online chat with his friends (with Jim Annan and Lauren Ash) was a favourite. It was a good combo of real relationships and social issues. We managed to surprise the audience over and over. They still do that scene on tour in Toronto and Chicago Second City.

And one of my absolute favourites is the synchro swimming sketch with Harry Shearer and Martin Short on SNL. It’s golden. The characters are subtle, real and have such genuine heart it makes me laugh and cry at the same time. That scene also managed to make a statement about gender-specific sports while surprising you with the characters’ approach. Short’s “I’m not that strong of a swimmer” will always make me laugh.

NTOW perform at Sketchfest March 13 and 14 at LOT. They also perform the last Wednesday of every month at the Drake. Snieckus stars in Mr. D, Mondays on CBC-TV Matt Baram stars in Seed, Thursdays on Citytv. Snieckus and Baram host the Dora Awards June 24.

The one I keep coming back to is Tina Fey and Scott Adsit’s Stripper from the Second City Chicago show Paradigm Lost.

A stripper, who is actually a professional dancer, has nothing but disdain for her client. She comes to a hotel room to give him a private dance and ends up shaming him, swearing at him and showing him she’s legit by knowing her “five positions, mothaf*cka!”

When I was in the touring company, I got to perform this scene with Scott Montgomery, and we learned it by watching a grainy old VHS tape of the original. Tina was this total powerhouse. I remember thinking, “I want to do what she’s doing, be insanely funny while having a strong point of view.” It influenced the work I went on to do at Second City in Toronto and Chicago.

My all-time favourite sketch would probably be Fatal Beatings, from Rowan Atkinson Live. I just love the line that it’s on in terms of being shocking and outrageous. That man is a genius.

Vidal is a member of the ensemble in the Second City’s new mainstage revue, Sixteen Scandals, which opens March 11.