Which is more efficient, a toaster oven or a regular oven?

It's sweater season and our bellies are calling out for warmth. That means Canadians are busy baking/roasting/toasting/broiling and any other. 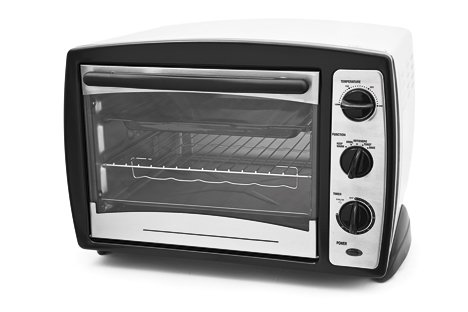 It’s sweater season and our bellies are calling out for warmth. That means Canadians are busy baking/roasting/toasting/broiling and any other verb that melds heat and food.

As long as wearing a tank top is possible, my oven stays off. I grill/grate/salad?ify every vegetable on the planet. But this, right now, is when our hearths come alive. The old romantic wood stove may be gone, but it wasn’t particularly efficient or clean-burning anyway.

So what is an efficient way to bake or roast? Personally, I squeeze as much of my baking as I can into my toaster oven. It takes a little while to heat up to where it needs to be, and mine is weirdly noisy in getting there, but it happily accommodates half-batches of scones, muffins, biscuits, mini-pizzas – perfect for households of one or two.

From a technical standpoint, both toaster ovens and conventional electric ovens are equally efficient in converting energy to heat. But they don’t draw the same amount of energy from the socket.

Some argue that since conventional ovens are often better insulated (especially if they have self-cleaning features built in), they’re better at retaining heat energy for longer periods of time and are therefore the right choice for ambitious all-day cooks.

Still, it really depends on what toaster oven you’ve got. These days you can score one with a convection oven built ?in, making it even more energy- and time-efficient. (Convection features circulate the air around the food, making it cook faster and more evenly.)

Of course these bad boys have higher wattage (up to 1,800 for a convection toaster oven large enough to roast a chicken), though they compensate by getting that bird roasted in up to 33 per cent less time.

But you really don’t want to fire these up just to toast a little spelt bread in the morning. If you’ve got room for both, a regular upright two-piece toaster can run on as little as 800 watts. If you’re eyeing a 1,200-watt upright toaster, spare the environmental cost of manufacturing two appliances and just use a run-of-the-mill toaster oven full-time.

Hard-core conservationists will tell you that with a good toaster oven and a two-burner electric hot plate, you needn’t also invest in a full-sized metal appliance that’s destined to gather dust – a point dinner-party warriors are sure to heartily contest.

By the way, just because a toaster oven is a bigger energy saver than a full-size oven doesn’t mean it’s the greenest cooker in town. A typical Crock-Pot/slow cooker maxes out at 200 or 250 watts. Even when it’s on for seven hours, it uses a meagre 0.7 kWh of electricity, which easily beats 50 minutes in a toaster oven and an hour in a full-size oven.

Many respected greens like David Suzuki will remind you that the most energy savings come from popping your dinner into the microwave.

It’s true that microwaves use a fraction of the energy of a toaster oven and even less than a slow cooker (just 0.36 kWh for a whole 15 minutes on high). It’s also true they take way less time getting the job done. But I wouldn’t recommend it for cooking anything of delicate nutritional value.

One study in the Journal of Science of Food and Agriculture found that microwaving sucked out 97 per cent of flavonoids in broccoli versus 11 per cent from steaming and 66 per cent from nutrient-leaching boiling.

And while studies have found overheating breast milk wipes out infection-fighting antibodies, a Stanford study found that even microwaving on low killed some of the ilks anti-infective properties.

If you do turn on an oven, big or small, keep in mind that you don’t have to preheat unless you’re baking and turn it off a few minutes before the food’s done to coast on free heat.

But to really reduce your carbon footprint, first and foremost tweak what goes into your oven. I’m talking more veggies, less meat.