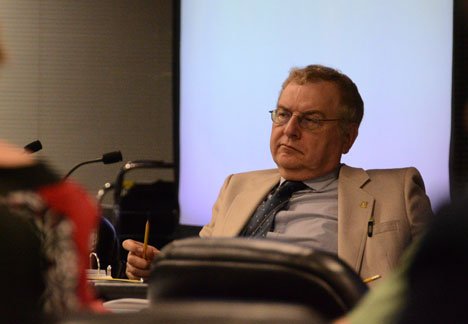 Mike Del Grande chairs a meeting of the budget committee in 2012.

Councillor Mike Del Grande was mocked by his colleagues on Friday when asked whether the city’s equity policy was discouraging white males from applying for public service jobs.

Del Grande put the issue on the agenda of the Employee and Labour Relations Committee, saying he was responding to a recent op-ed about affirmative action by National Post columnist Barbara Kay.

In response to Del Grande’s inquiry, Councillor Janet Davis moved a sarcastic motion asking for a report on “an affirmative action plan for white, straight, able-bodied males, to address the historic under representation of this group in the City of Toronto workforce.”

Del Grande was not amused. He said that he was simply asking questions and that if any councillors had a problem with that they might want to “look at a different line of work.”

Afterwards, he told reporters that he brought the issue to committee because he wanted to assuage any fears that if “you’re a white male you can’t apply at City Hall.”

Del Grande said he doesn’t necessarily think that white men are underrepresented in the municipal workforce, but “I just wanted that categorically stated that everybody should have an opportunity to apply and everybody will be treated fairly.”

He went on to comment on the demographics of the 45-member city council, only one-third of which is female.

“But I don’t think we should lament that there’s more males for example in council simply because they got voted that way.”

The committee voted to receive Del Grande’s item, which means no further action will be taken. Councillor Davis admitted she moved her motion as a joke to make a point.

“I found [it] astounding in 2014 that there’d be anyone here who would think that men didn’t have a fair chance at City Hall when it comes to jobs,” she said.

“We have still overrepresentation in many jobs [by] white, male, straight, able-bodied people. And we have a long way to go.”

The Post column Del Grande cited was headlined “Affirmative action for her, but never for him.” It reported on a white, able-bodied man who applied for three senior human resources job at the city but received no response.

Kay questioned why the city actively tries to recruit women for jobs like the police and fire service, but doesn’t appear to try to balance out departments where men are underrepresented. According to the column, in some divisions like Toronto Employment and Social Services, up to 82 per cent of workers are female.

“Why are women still a category on the equity list at all,” Kay wrote, when they “no longer face traditional roadblocks in professions[?]”

In 2000 the city adopted an employment equity policy that states “citizens of Toronto are best served by a public service which reflects the diversity of the community which it serves.” The policy focuses on four designated groups: women, visible minorities, aboriginal people, and people with disabilities.

It’s not known how accurately the public service reflects Toronto’s diversity however because on the two occasions that the city has conducted workplace surveys the response rate has been too low to be considered statistically valid.

Nearly half of the survey respondents in 2011 were women, which a city report noted “may be considered a positive indicator of the overall representation of women within the Toronto public service.”

The report drew no conclusions about the other three groups.

This isn’t the first time that Del Grande, a veteran councillor, has made racially charged remarks. In 2004, he expressed concern that “white people [were] moving out” of his Scarborough-Agincourt ward.