More than $2 million was donated to the Prime Minister's two leadership bids, but the identities of his major backers have never been publicly disclosed 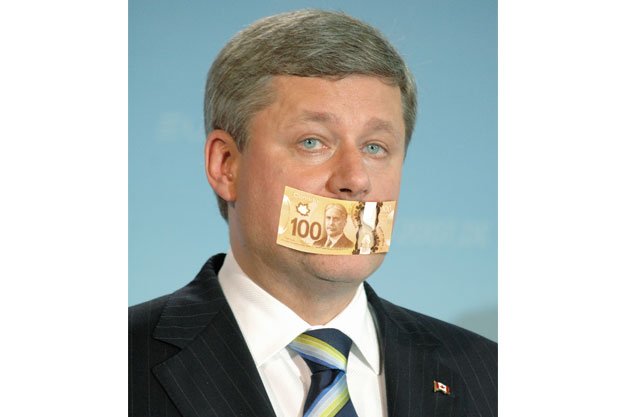 As the renowned Republican backroom operator Mark Hanna noted back in the late 19th century, “There are two things that matter in politics. One is money, and I can’t remember the other.”

Indeed, the fantastically wealthy Koch brothers proved in the recent U.S. congressional vote that organizing billionaires to buy elections is a lot easier than herding cats.

The Kochs raised $290 million from America’s mega-rich to win control of Congress, and are now raising a further $889 million in a bid to buy the Oval Office.

Here in Canada, we have tougher rules restricting the role of money in politics. But the Boy Scout aura surrounding our election financing laws appears to have lulled us into a bit of a coma.

The first: who owns Stephen Harper?

This isn’t a philosophical enquiry. It’s a straightforward question about the identity of the secret donors who paid the bill for Harper’s rise to power, first as leader of the Canadian Alliance and then the Conservative party.

Donors contributed more than $2 million to the prime minister’s two leadership bids, but the identities of some of the major donors have never been publicly disclosed, according to Ottawa-based corporate responsibility advocacy group Democracy Watch.

The group notes that there was nothing illegal about the donations under the election laws of the time. But anyone who believes that those secret donors don’t have a favoured place in Harper’s heart (such as it is) probably also believes that Mike Duffy has always lived in a little cottage in PEI.

In the 2002 Canadian Alliance leadership race, Harper disclosed some of his donors but kept secret 10 of the major ones. A list of donors to Harper’s Conservative party leadership race two years later was at one point posted on the party’s website but has since been removed.

At the time of those races, it was legal for leadership contenders to receive unlimited donations from corporations, including foreign-owned businesses operating in Canada.

“Big business and [its] executives could have given Harper hundreds of thousands of dollars in donations,” says Democracy Watch co-founder Duff Conacher, who is currently a visiting professor at the University of Ottawa’s School of Political Studies.

Although there’s no legal requirement for disclosure, Conacher argues that Harper should divulge the names of his donors for the same reasons of ethics and transparency that he so loudly trumpeted in his first election campaign.

Shouldn’t Canadians know, for instance, if Harper’s early leadership bids were significantly bankrolled by, say, the Koch brothers, who are among the largest lease-holders of Alberta’s tar sands and therefore have a huge financial stake in preventing Canada from limiting greenhouse gas emissions?

Have Harper’s radical policy departures in areas like energy, the environment and the Middle East been unduly influenced by large donors? And if not, why the secrecy?

On another election financing front, there’s been little outrage over the fact that the Harper government just eliminated a key law that was aimed at countering the power of Big Money in Canadian politics.

The law – under which Ottawa paid political parties a small $2 subsidy for every vote they received – was widely recognized as by far the most democratic aspect of our election financing framework, since it ensured that every vote cast in a federal election had some impact. Even if someone voted for a party that didn’t win, that voter managed to direct a small government subsidy to his or her chosen party. These subsidies added up to millions of dollars and were a key source of political funding, having the effect of giving equal weight to every vote no matter how rich or poor the person casting it.

So, naturally, Harper scrapped it. The next federal election (expected in the spring or fall) will be the first in which this quintessentially democratic aspect of our election financing laws no longer applies.

Of course, poorer folks still have the full legal right to take advantage of other government subsidies in our election financing system – except that they lack the money necessary to do so.

Individuals making contributions to political parties receive generous government subsidies through the tax system. An individual donating $400, for example, gets $300 back in tax savings. But you have to have a spare $400 in order to play this game.

That’s why only 2 per cent of Canadians make political donations. Not surprisingly, most of these contributors are in the upper income brackets.

So the bulk of the tax subsidies – which totalled $20 million in the 2009 election – go to this wealthier group, which enables them to increase their influence over our elections.

In fact, all aspects of our election financing system involve government subsidies. But only one – the now-removed pay-per-vote subsidy – distributed the subsidy in a way that didn’t favour the wealthy.

And Harper has also just increased the subsidy for wealthier Canadians by raising the limit on political donations from $2,400 to $3,000 a year ($4,500 in an election year). The new rules also hike the amount candidates can donate to their own campaigns from $1,200 to $5,000, and allow leadership candidates to donate $25,000 to their own campaigns.

Of course, the wealthy are able to influence the political process in other ways, too, most notably by shaping the public debate through their ownership of the media and by threatening to withdraw their capital from the economy if laws they don’t like are enacted.

In the recent U.S. congressional elections, the Koch brothers helped secure the victory of an unlikely band of far-right extremists who control both the House and Senate.

Among some 3 million political ads for both parties, there wasn’t a single mention of the issue of income inequality – either for it or against it, says Sam Pizzigati, editor of a newsletter on inequality at the Washington-based Institute for Policy Studies.

The rich have effectively declared that subject – and the implication that they should face higher taxes – out of bounds. Given the extraordinary grip of the wealthy on so many aspects of society, why on earth wouldn’t we want to hold onto a law that, at least in one small way, gave a homeless person the same political power as a billionaire?

Linda McQuaig is an author and journalist. She ran for the NDP in the Toronto Centre by-election in 2013, and plans to seek the nomination again for the upcoming federal election.