Before Thursday's police raids, the city was working on regs to license pot dispensaries, so what gives? The answer: follow the money. 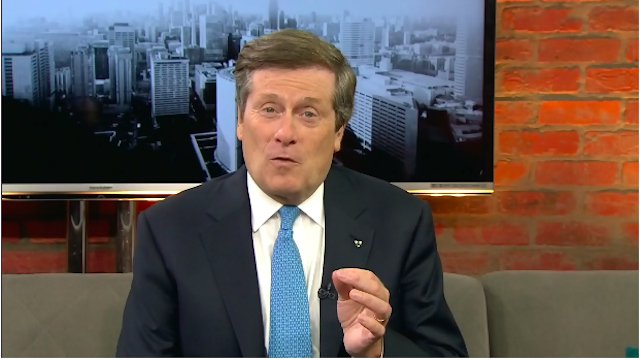 Screen shot from John Tory's appearance on CP24 May 25

It looked like Toronto police had invited media for munchies Friday.

The press conference at police headquarters to announce details of the cops’ raids on pot dispensaries had all the elements of a carefully-choreographed attempt by the cops to strike fear into the hearts of Torontonians – with marijuana-laced lollipops, candies, chocolate and cookies. All of which elicited a predictable question from one of the more, um, out-to-lunch among the media horde about whether police had investigated the possibility of such edibles getting into the hands of children. Shock and horror.

Chief Mark Saunders said there was no such evidence. Nor was there any evidence of the products on display posing a danger to consumers. Yet, the chief insisted Thursday’s busts of some 40-plus dispensaries across the city – where 269 kilos of dry leaf was also seized – were carried out with the health of consumers in mind. And not in the name of some new chapter in the war on weed as the feds figure out how to legalize it.

Saunders says the cops were also responding to community complaints and concerns about “community safety.” Where have we heard that before?

Thankfully for the handful of pot activists who crashed the presser, Saunders didn’t get a free ride on that one. Just who are the cops trying to protect anyway?

Certainly not medpot patients who are now going to have to go back onto the black market, “in the back alleys,” as one protester at police headquarters put it, for their supply. Or, is it the interests of licensed medpot producers with Bay Street connections, the same ones providing training to Toronto police on the ins and outs of medpot laws, that the cops (and our big biz friendly mayor) are watching out for? Strange days have found us.

Saunders says he was not “politically pressured” to carry out the raids, just in case there was any doubt. Hard to believe, though, when you consider Mayor John Tory has been warning for the last couple of weeks about lowering the boom. The city sent strongly-worded letters to landlords renting space to pot businesses warning of $50,000 fines and that they would be shutdown, even as the city was supposed to be working on regs to license dispensaries.

Indeed, with all the popping off about the recent increase in gunplay in the city, this latest bit of reefer madness provides a timely smokescreen for Tory and Saunders. The idea wasn’t lost on the pro-cop Sun, or Tory’s former campaign adviser, Nick Kouvalis, who took to Twitter to offer the opinion police should probably be focusing their efforts on real drug dealers, you know, the ones with guns. But as to the why now, the answer is a little more complicated.

It’s pretty safe to say that the chances of the 186 drug-related charges laid by Toronto police against 90 people (for possession of marijuana for the purpose of trafficking and 71 charges related to proceeds of crime) have little chance of sticking once legalization arrives. By the looks of it, most of the dispensaries busted were selling to customers with legit prescriptions from doctors. If the idea was to go after the “alarming” proliferation of “bogus” operations, as Tory called them, selling to anyone who walks in the door, then why bust businesses selling weed to medpot users authorized by Health Canada?

Saunders was asked about that. His (somewhat inarticulate) answer was that “their intentions may be well-served, but at the end of the day it’s unlawful. Where’s the marijuana coming from? We don’t know.”

It’s not clear if Saunders meant to suggest the weed being sold by dispensaries to legit patients is being supplied by the black market. Most of it, in fact, comes from licensed producers. Only, not the 30 or so licensed producers, of LPs, with Bay Street connections authorized by the Harper government to sell weed to patients. But independent growers licensed to grow weed by Health Canada under the old medpot regime, known as MMAR. And therein lies the legal gray area.

Licensed producers say these independent growers are not authorized to sell weed to dispensaries.

“Our concerns with dispensaries are that they provide a product that hasn’t been tested and comes from an unknown source,” argues Mark Zekulin, president of Canopy Growth Corporation (Tweed), the country’s largest LP. “Most claim that they purchase from MMAR growers to prove that they are operating legitimately but no provisions of the MMAR allowed for resale. In fact, illegal diversion from the MMAR was the main reason the program was shuttered in favour of a regulated production system.”

Except, in February, a B.C. court judge ruled unconstitutional the newer medpot regime brought in by the Harper government, known as MMPR, which authorizes only Health Canada licensed producers to sell weed. Specifically the court struck down the provision in MMPR prohibiting patients from growing pot for personal use, essentially blowing up the monopoly enjoyed by Health Canada authorized LPs.

The court also found the regulations were unconstitutional because their effect was to limit supply and therefore access to medpot patients.

Which brings us back to the whys and wherefores of the city’s crackdown on dispensaries. To find the answer to that one we need only follow the money. Isn’t that always the case when drugs are involved?

One pot entrepreneur who called NOW’s offices as the busts were being carried out Thursday, let’s call him Felix, says the raids have much to do with Health Canada authorized LPs feeling the financial burn from storefront competition.

Adding smoke to that speculation is the somewhat cozy relationship between LPs and police. Tweed, for example, provides training to Toronto police on the ins and outs of medpot laws.

Zukelin adds that the decision to raid storefront dispensaries “have nothing to do with us.”

The timing was nevertheless curious. Or perhaps it was just a coincidence then that Tweed chair and CEO Bruce Linton was at City Hall last week, just 48 hours before the raids were carried out, to announce a new “compassionate pricing” regime of $5 per gram and same-day delivery of its product.

From Felix’s perspective, Thursday’s raids are a timely “clearing of the field” for Ontario licensed producers, who’re losing something like $5 million a week in potential profits to dispensaries raking in between $30,000 and $60,000 on a good weekend. Which may explain why licensed producers are now considering opening up their own storefront operations – dispensaries without product – to bring in more customers off the street.

It typically takes up to two weeks for medpot users to get their supply in the mail from Health Canada licensed producers, one of the reasons dispensaries have popped up and are preferred by medpot users. Another is product quality. Licensed producers have gotten mixed reviews for their bud. Storefront operations also allow patients to see, touch and smell the product they’re buying.

Zukelin counters that licensed producers “provide information on the scent and appearance of the bud so people can make a decision between the dozens of products we have.” He says prices are lower, too, (“as low as $4.80 a gram”) and the product is delivered to your door free so that “people can try a few out and find the one that works for them.”

Making Thursday’s crackdown more hazy is the fact the city was supposed to be working on regulations for dispensaries, like they have in Vancouver, where the operations pay a licensing fee and are required to be a certain distance from schools.

At least, that seemed like the plan when Tory appointed Joe Cressy chair of the city’s Toronto Drug Strategy Implementation Panel. On Monday, May 30, Toronto’s Board of Health is scheduled to debate a framework for legal pot.

But it appears that Cressy and the mayor may have had a parting of the ways on the issue.

Cressy plans to table a motion at the Board’s meeting calling on the feds “to provide immediate guidance on how cities should approach non-medical possession and sale of Cannabis based on a public health approach, rather than simply a criminal justice one.”

“This is a national issue, not just a Toronto one,” Cressy said in a statement. “We can’t arrest our way to a solution.” Apparently, the city is intent on trying anyway.