Who speaks for peace on Iran? 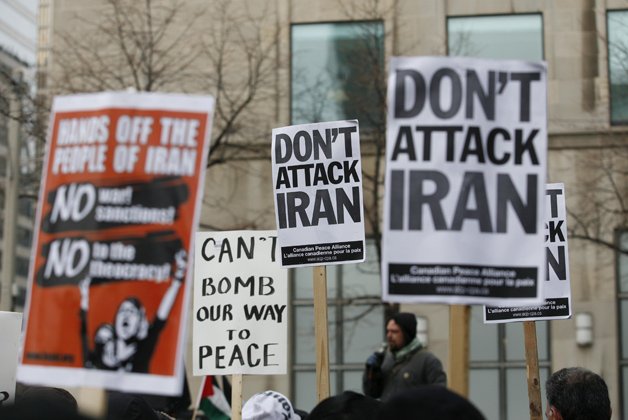 An international debate about whether protests against an attack on Iran should also embrace the Iranian pro-democracy movement has arrived in Toronto just in time for Saturday’s (October 6) anti-war’s rally at Queen’s Park.

After much discussion, the Toronto Stop the War Coalition has decided to stick with a simple “No war with Iran” message and will not have reps of the pro-democracy movement speak at the mic.

Coalition spokesperson James Clark says the position is consistent with previous campaigns. The umbrella group of more than 80 labour and community orgs opposed military action in Iraq and Afghanistan, he says, but took no position on their governments or opposition forces.

“It is not up to the Coalition to endorse any one position in the Iranian community about what should happen inside Iran,” he says.

But journalist/political activist Arash Azizi and some of his fellow Iranian Canadians will be arriving Saturday carrying placards denouncing both military invention and the authoritarian Iranian regime.

Azizi’s request to speak at the rally has been turned down. “Our message is, please do not exclude the Iranian community. It’s important to make clear that opposition to war does not mean endorsement of the Iranian regime. War and an aggressive environment will help the regime.”

Azizi is also troubled by the fact that the flag of the Islamic Republic of Iran is often carried at marches.

Niaz Salimi, president of the Iranian-Canadian Community Council and, like Azizi, an opponent of the Tehran government, counters that a simple “No war” message is more likely to attract supporters, since not all Canadians are well-versed on Iran.

“Everybody else can bring their placards or do whatever they want. They are free, and we appreciate that. But people don’t come to get confused people come to get one message: ‘Don’t attack Iran.'”

The debate, however, won’t end Saturday, because the same conversation is happening in anti-war circles around the world, says David McNally, a York U professor of political science and veteran political activist.

“People who don’t want war have real questions about that regime, its intentions and its authoritarianism,” he says. “I think movements look more attractive when they allow people with different political takes and encourage their participation.”