Whoo hoo More lesbians in movies than ever

First Grandma, then Freeheld, then Carol three great dyke-themed movies in one year. Yay!!But wait. What took so damned. 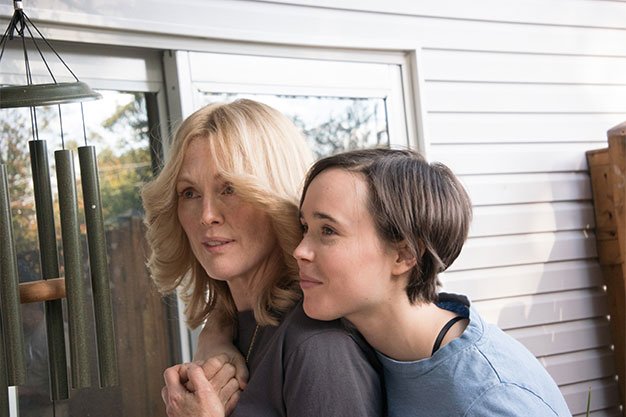 But wait. What took so damned long?

As Todd Hayness glorious pic Carol flashed before my eyes, it took me back to my teens when I was falling in love with a woman and feeling that combination of desire and panic. And I wondered: why did I have to wait until 2015 to have my personal experience validated in a mainstream movie?

If ever there was proof of the film industrys resistance to female-centred films, its the length of time its taken to see more than one very good lesbian-themed film a year.

Historically, by comparison, theres been a glut of movies featuring trans characters, even though the trans movement is in its relative infancy. Maybe thats because Oscar loves a transgender character. Hilary Swank won an Academy Award for Boys Dont Cry and Jared Leto for Dallas Buyers Club, Felicity Huffman was nominated for Transamerica, and, having copped a Golden Globe nom, Eddie Redmayne will likely be in the running for his performance as The Danish Girl.

But 2015 was special. Freeheld featured great performances from Julianne Moore and out actor Ellen Page as a couple fighting for lesbian rights, Lily Tomlin finally played a lesbian in Grandma and got a Golden Globe nom for her performance and the brilliant Hayness Carol is an Oscar frontrunner.

I asked him why his is one of the first mainstream films about a lesbian romance ever made. He said sexism is the issue, not homophobia, and film financiers fear of female stars.

People are afraid of women in films, and that goes double for a lesbian movie, he told me when I had the chance to talk to him about Carol. Youd think the lesbian thing would be an enticement, but the problem is that it doesnt have leading men. Theres something novel and modern and contemporary about queer cinema, but you just cant shake those old feelings about women as the main subject of a film.

When a dyke-themed movie does get a release and mainstream attention it tends to show lesbian life in, to put it mildly, a less than positive light. The central character in Lisa Cholodenkos superb debut feature, High Art, was a junkie. Charlize Theron won an Oscar for her portrayal of psycho killer Aileen Wuornos in Monster. And in Cholodenkos more recent pic The Kids Are All Right, lesbian mom Julianne Moore sleeps with her childs originally anonymous sperm donor (puh-lease).

But in this years entries, the lesbians look and feel real. Theres cantankerous Tomlin, wearing Converse sneakers and jeans, as a woman whos still not over the loss of her long-time lover. Carol conveys that I gotta have her its worth all the risks thing goin on, and, especially in its first hour, Freeheld portrays the initial attraction between two women completely authentically. When Page tells Moore to stop behaving like a cop and, later, to come out already, the dialogue feels like it was lifted from a documentary.

Television, especially during its current creative boom, is way ahead of the movie world. There are 25 series with dyke characters this year alone. And thanks to Orange Is The New Blacks glorious butch Lea DeLaria, theyre not all lipstick lesbians.

I take Hayness point: movie investors want to protect their dough. But just for the record, we lesbians do like to go to the cinema. And besides, if the TV industry is any indication, dykes are good for business, no matter whos watching.

So, Hollywood get with the program. More, please.