NOW MagazineNewsWho’re we Putin on?

Who’re we Putin on?

In this excerpt from her new book on the Olympic industry, Helen Jefferson Lenskyj argues that Russia's anti-gay propaganda laws have much in common with Olympic values and homophobia in the West 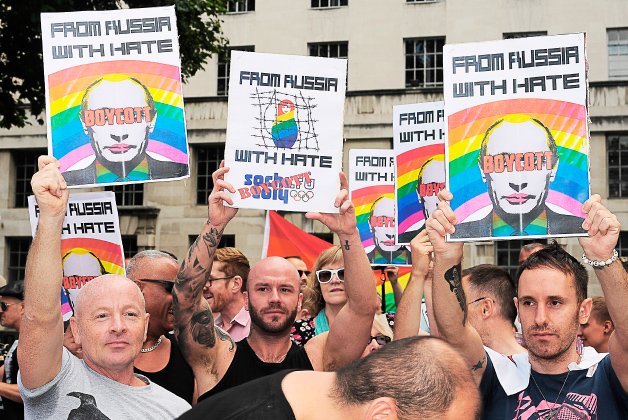 When the International Olympic Committee (IOC) awarded the 2014 Winter Olympics to Sochi in 2007, issues of sexual diversity and homophobia in sport attracted little attention in the western media.

Within western LGBT communities, however, it was widely known that sexual minorities in post-Soviet Russia faced significant challenges above and beyond those of their non-gay counterparts.

As early as 2006, the Ryazan region of Russia had banned the promotion of “homosexual propaganda” among minors, a move that marked the beginnings of a pattern that spread to a number of other Russian regions and finally, to the entire country.

In October 2012, following an earlier court decision banning a Pride House (a safe space for LGBT athletes and spectators) at the Sochi 2014 Olympics, Russian LGBT activists announced plans to “out” gay politicians and gay members of the Russian Olympic Committee, and to appeal the case to the European Court of Human Rights.

In a typical victim-blaming approach to the Pride House case, the judge had justified the ban on the grounds that it was “extremist” and could provoke “social-religious hatred.” Around the same time, the charge of “religious hatred” had been invoked in the Pussy Riot case. In the current climate, it is quite likely that a Pride House would be the target of homophobic attacks, but responsibility for such attacks should lie with the attackers, not with the LGBT targets.

However, just as Russian police routinely arrested the victims rather than the perpetrators of violence during gay pride events, this line of reasoning was unsurprising.

These developments, as well as the increasing evidence of homophobia throughout the country, prompted the Federation of Gay Games to boycott the 2012 International Peace and Sport conference in Sochi on the grounds that its organizers had failed to ensure the safety of the Gay Games delegate.

These events attracted little attention outside of the LGBT media, and it was not until Russia’s nation-wide legislation banning propaganda of “non-traditional sexual relations” to minors came into effect in June 2013 that the implications for LGBT athletes and spectators and for those who still believed in “Olympic values” finally became front page news around the western world.

The Russian government began drafting the anti-gay law in January 2013. Had I been applying for an entry visa at that time, my role in developing and writing a curriculum guide on sexual orientations and homophobia for the Toronto Board of Education in 1991 may have caused a problem.

However, to put the Russian law in perspective, as a Guardian article noted, as recently as 1987, Margaret Thatcher’s government had passed legislation known as Section 28 which banned the teaching or promotion of homosexuality in schools. And, in a letter to the Guardian Weekly commenting on the article, “Gay Russian teens live in fear,” an Australian reader pointed out that in 1988 Hobart city council had banned a market stall that the Tasmanian Gay Law Reform Group wanted to set up. About 130 people had been arrested, and it was not until 1997 that homosexuality was decriminalized in Tasmania.

More recently, in Ontario there was vehement opposition on the part of Roman Catholic leaders and school board officials to the province’s 2012 anti-bullying legislation, which required all schools to establish Gay-Straight Alliances, and, equally important, to allow students to call these clubs Gay-Straight Alliances if they chose to do so.

Previously, some schools had insisted on erasing the gay word, thus weakening the intent and scope of the legislation.

In language that would probably resonate with Russian Orthodox Church leaders, the Catholic Archbishop of Toronto claimed that the new law threatened religious freedom when it “overrides the deeply held beliefs of any faith community, and intrudes on its freedom to act in a way that is in accord with its principles of conscience.”

As I examined the current situation in Russia, I was repeatedly struck by the parallels in western democracies.

While these developments have rarely reached the extremes that exist in Russia, some recently disclosed government initiatives, most notably, citizen surveillance programs conducted by the US National Security Agency and the UK Government Communication Headquarters, clearly demonstrate that basic human rights, particularly freedom of speech, freedom of assembly and freedom of information, cannot be taken for granted.

In September 2013, for example, the Canadian government issued a directive to wounded veterans of the Canadian Armed Forces forbidding them to disclose their “views on any military subject” through social media. As one retired officer claimed, “This is right out of something you would see during the Soviet era.”

For their part, many Russians appear to accept a certain level of censorship, with opinion polls from 2002 to 2010 consistently reporting that 43 to 45 per cent of respondents agreed that “the state should ban books and films which insult morals.” In 2010-11, more than half concurred that political censorship on TV was needed.

As well as the parallels with western democracies, I noted many characteristics that Putin’s Russia shares with the Olympic industry.

As I’ve explained in past publications, I use the term industry to denote what is fundamentally a profit-making enterprise for the IOC, multinational corporate sponsors, media rights holders, developers, resort and hotel owners, and other stakeholders. Thus, I challenge Olympic mythology and its pseudo-religious language: Olympic movement, Olympic values, Olympic spirit, Olympic family and Olympism.

On a personal note, I was not planning to write another book on the Olympics until I read about the events of August 2013 – the now well-known “rainbow fingernails” story.

During the World Track and Field Championships in Moscow, two women on the Swedish team painted their fingernails in rainbow colours as a protest against the anti-gay laws. In response, a Russian athlete, Yelena Isinbayeva, denounced both the Swedish women and the (western) LGBT movement. Russia, she famously claimed, has no gays and lesbians.

Isinbayeva’s statement, of course, did not come out of the blue rather, it reflected a complex history of Russian attitudes, policies and practices on all sexuality-related issues.

Although there was international outrage and censure of Russia’s anti-gay legislation in 2013, advocates of a boycott, particularly those who drew parallels with Nazi Germany’s anti-Semitism before the 1936 Berlin Olympics, generally met with a chilly reception.

No one, it seemed, wanted to be reminded of the role played by the IOC and the United States in supporting Hitler’s regime, and, by extension, Putin’s.

Olympic boycotts have had a long and often unrecognized history, but one specific boycott – that of the Moscow 1980 Olympics – is routinely invoked as proof that they are ineffective and only hurt the athletes. History will tell whether failure to organize a Sochi boycott represents another missed opportunity to challenge a repressive regime.

A comparison of the Olympic industry and Putin’s Russia reveals important similarities.

This is not to suggest actual equivalence between them, but rather to draw attention to some common characteristics, most notably in the ways each wields power.

In this regard, Emily Cooper’s argument that the IOC acts like a state and should be treated like a state is particularly relevant. Both “states” share the following features:

Given the compatibility between the Olympic industry and Putin’s Russia, it could be argued that the relative immunity to international censure that both enjoy, and the IOC’s inaction on Russia’s human rights violations, are understandable.

The Olympic industry myth that sport is apolitical has remarkable endurance, as does the Olympic promise of peace and harmony among nations through sport.

If sport is apolitical, it is, of course, illogical to promise political outcomes, but mythology defies logic when the Circus Maximus is involved.