What the mayoral candidates have to say about cannabis. 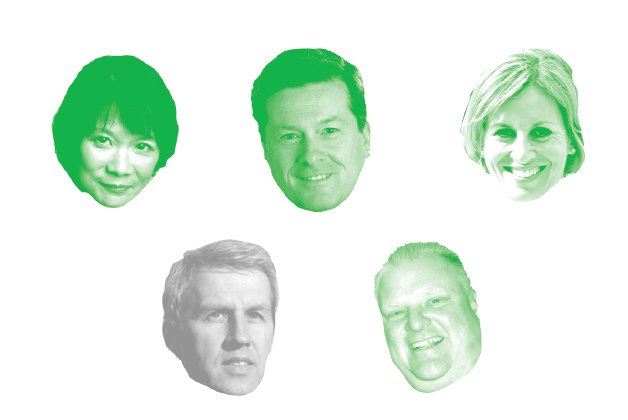 “Personally, I support liberalizing marijuana laws. People shouldn’t have criminal records for smoking pot.” – Olivia Chow, who says she smoked “a little bit” when she was younger.

“I am in favour of decriminalizing. The current laws bog down the courts.” – John Tory, who says he hasn’t smoked since university.

“If the federal government deems that there will be change, then I will make sure that change is implemented with a focus on making sure communities are safe.” – Karen Stintz, who hasn’t smoked since becoming a parent.

“There are greater opportunities to get better policing without following up on such misdemeanours.” – David Soknacki, who says he’s never puffed because “life is too interesting to escape reality.”

“Why wouldn’t [the Conservatives] at least decriminalize it and try to get revenue from it?” – Mayor Rob Ford, on the Sports Junkies radio in January. His campaign didn’t return our calls, but he has said, “I smoked a lot” of marijuana.