Robert Fisk, legendary Mideast correspondent for Britains Independent, has been chasing human evil and inspiration for almost four decades. He. 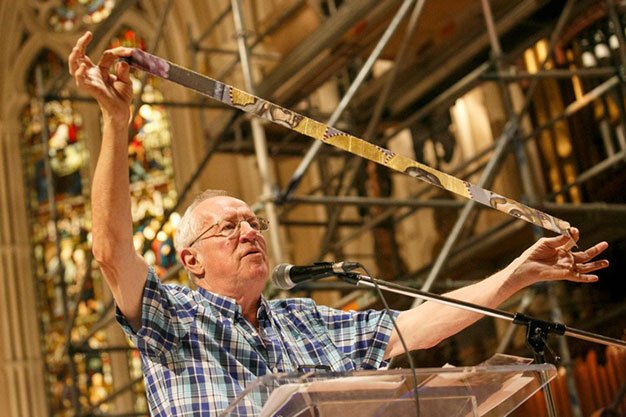 He has counted bodies in Baghdad morgues, had part of his hearing blown out by artillery while covering the Iran-Iraq war, sat with Osama bin Laden in his secret tent, interviewed Saddam Hussein and bedded down on the Syrian front lines.

But the tart-tongued Fisk one of the worlds most famous living journos told a 900-strong crowd crammed into church pews at St. James Cathedral on Thursday, September 24, that for the first time in almost 40 years hes not exactly sure whats going on in the Middle East.

Im at a bit of a loss, the Beirut-based Fisk tells the meeting hosted by Canadians for Justice and Peace in the Middle East. I dont know what comes next.

These days Fisk likens himself to a detective in a TV series becoming ever more lost in confusion and delusion as the case eludes him.

Still, hes got theories more than guesses, less than certainties and all offered with the well-earned irritability of someone whos had it with dictators and Western-generated violence.

For starters, hes been struggling to explain ISISs latent function in the cataclysm now remapping the region and is stumped by the meaning of the organizations shocking emotional flatness. Hes never seen a guerrilla organization so devoid of anger and passion, even in its terrifying videos. This strikes me over and over again, he says.

Even the way the caliphate enforcers destroyed sacred paintings in Syrias oldest Christian church in Yabroud demonstrated icy detachment. Fisk holds up a strip of gold he rescued from the ravaged paintings.

It took me a long time to realize what was odd about this, he says. This wasnt some man crying Allahu Akbar and stabbing the painting. This painting was fed into a machine. A shredder. There wasnt power of passion or emotion in this destruction. I began to realize, ISIS is not actually a cult its a weapon. Its cold like a battleship. Whose weapon is it? Im not sure. But I have a pretty shrewd idea.

Fisks shrewd ideas come wrapped in amazing narratives that cross decades, nations and time zones, and draw on years of quiet chats with CIA agents, army officers, power players and citizen activists sometimes -behind battle lines, or as I like to imagine but he doesnt say, in hotel lobbies with ceiling fans and potted palms. We are all here witnessing the best of impassioned old-style journalism, and the reverence for him in these majestic confines seems, in part, a celebration of it.

Fisk believes ISIS has become a battering ram for Sunni power brokers unhinged by the prospect of the U.S. courting a strategic alliance with Iran and backing away from its ties to Saudi Arabia, the Shiite nations mortal enemy.

The Gulf countries are always quaking with fear, Fisk says. I suspect America is playing with the idea that Iran should police the Middle East. Is ISIS the only weapon left [for Saudi royals] to contend with the new U.S. policy? I have to leave the question unanswered. Thats as far as I can take you.

Not that the Saudi monarchy is actually signing cheques for ISIS, he stresses. Fisk has already received a lawyers letter warning him away from articulating such notions. They dont have to the cash pours in anyway.

Just watch what ISIS is not talking about, he advises: Saudi Arabia and Israel. Theyve made only one reference to the Palestinians and didnt utter a word about Israels brutal bombardment of Gaza last year.

But what of the U.S.-led bombing campaign, in which Canada is participating, that is supposed to defang ISIS and save us all from terror? Well, he thinks its a wipeout in more ways than one.

Fisk spent nights on the Syrian front line 40 kilometres from Palmyra, where ISIS destroyed ancient tombs earlier this month, and watched the skies.

The Russians think air activity over Syria and Iraq is pilot training. This is not a serious military campaign, nor is it intended to be. Strange, isnt it?

People in the Middle East are right to think our tanks and helicopters wont bring freedom. They never have, he says. Its no accident that the first video released by ISIS was not a beheading but depicted the bulldozing of a sand berm marking the Syrian-Iraqi border. That video featured the message The end of Sykes-Picot, a reference to the despised 1916 pact that short-circuited Middle East independence, handing Syria and Lebanon to the French and most of Iraq, Palestine and Transjordan to the British.

If you are Arab Muslim, this wasnt a hundred years ago, he says. Sykes-Picot effectively said No freedoms, no liberation, no dignity.

And now, he says, the pact is dissolving in front of our eyes, its boundaries and assumptions blurred by war, ISIS and the tide of refugees streaming out of fractured countries, many never to return. What comes next cant yet be seen. One out of every three people in Lebanon is now from Syria, he notes.

So where does Canada fit in this upheaval of suffering? Fisk gets caustic. Why wasnt Stephen Harper in Berlin with Angela Merkel saying We want to share your burden? he asks. Its the old generals Rick Hillier and Romeo Dallaire who are pushing the most generous refugee-welcome proposals, he says. Quips Fisk, The retired soldiers have saved the honour of Canada.