The owners of Queen Video and Videoflicks explain how business has changed since the days of Blockbuster. Even though they're still here, I already miss the experience of discovering little-known flicks curated by fellow film buffs. 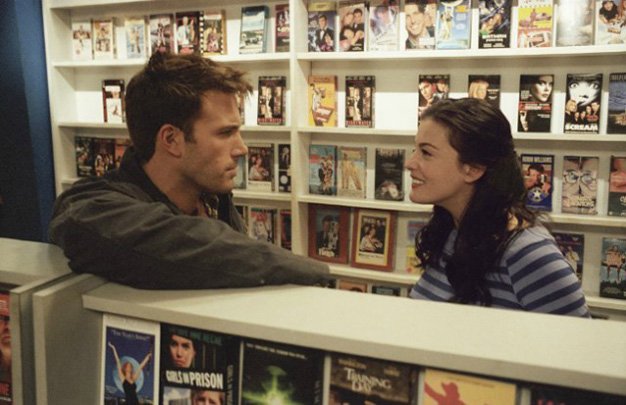 At least the video store will always live on in 90s period pieces. Like Jersey Girl.

In stark contrast to the superfluous openings of weed dispensaries in Toronto, when a video store disappears from the streetscape, it’s deeply mourned. Of course, as sad as we sometimes get, it doesn’t come as a surprise. Despite overcoming the big-box boom of the 2000s, independent video stores now face history’s largest shift in the home movie market, and the most-embraced home entertainment feature since the television: on-demand streaming.

“There were at one time 75,000 video stores in North America we’re down to about 1200 left,” Howard Levman informs me, just three weeks after his flagship location of Queen Video at Spadina closed. “Queen reached that threshold where there’s just not enough business.”

Levman first opened his venerable store 35 years ago, with two more locations following suit. A College location closed in 2014, but the Bloor location in the Annex remains just a few blocks away from the equally beloved Suspect Video (which will sadly shutter at the end of this year). So what’s still working at the remaining store?

“Well, the Bloor store was busier,” he says. “It had a lower break-even point, so it was able to last longer in a shrinking industry. Our customers that are left, most of them aren’t internet savvy and they don’t download anything.”

But at a time when you can rent new releases on your iPad or start an entire series of television with one indifferent click, aren’t people drawn to the back catalogue of classics on offer at local video stores that services like Netflix and Shomi are sorely lacking? The answer is no.

The last time I rented from Queen Video was in February when a weekend trip away with my girlfriend required the “we’ve been dating over a year” classic Star Trek 2: Wrath of Khan. The account we rented it on hadn’t been used for more than a year, and when I first heard of the store’s closure in April I couldn’t help but feel a pang of guilt. It’s ludicrous to argue against streaming or torrents being more convenient and affordable, but it’s the sense of discovery and sharing a communal passion with fellow movie obsessives that can’t be digitally replicated. It was the experience of asking for City Slickers 2 and having an employee raise their eyebrow excitedly before blurting out “Curly’s Gold?” that I am sentimental for.

“Toronto’s about the only city left with more than one video store that’s half decent,” Levman laments. “Suspect is a good store, and Bay Street Video – L.A. has nothing. New York has none, not one decent one left. Seattle has one good store. San Francisco has a good store and that’s it for the continent.”

Levman intends to keep Queen Video going as long as he can, and while it’s a recognizable eventuality that the video store will become a retro oddity destined for the Pioneer Villages of the future, I was still surprised to hear that the more family-oriented Annex location of Queen Video hadn’t at least contributed more to its customer base. So I checked in with the video store of my childhood, Videoflicks at Avenue and Lawrence, to see how the business had evolved uptown.

“Every party we go to someone asks what do you do,” co-owner Joe Carlino remarks when I reach him on a dreary Sunday morning. “‘We’re in the video business.’ And they look so sad. I say, ‘Don’t worry about it!’”

Opened the same year as Queen Video in 1981, Videoflicks got their start at a time when video stores were still perceived as a threat to the film industry, much in the same way that streaming is today.

“The only way to see a film prior to that was in the theatre, or on television. Of course then the movie industry was terrified,” explains Carlino earnestly. “They thought for sure this would cannibalize what happened in the theatre or television, and it turned out to be the opposite. The more movies you put in people’s hands, the more people were interested in film.”

Videoflicks expanded into 35 different locations during the home movie invasion of the 80s and 90s, but today there is just one location since Joe and his partner Steve Cohen (who started working for the company in 1989) bought the business in 2004.

“We should’ve been gone by now, but it just stays vibrant.” Joe says, reflecting on Blockbuster’s heyday and the quick leap from the VHS format to DVD. What’s changed is where their customers come from. It used to be people who live within a mile of the store. Now, he says customers come from the 905 and even the 705 to browse the selection.

“That Avenue Road corridor is very powerful for us,” he says. “If we were on Yonge Street, it would be a very different business.”

But despite the resilience of Videoflicks, Carlino admits that the streaming world will dictate their next move.

“Almost all of our clients have Netflix or Shomi,” he says. “It’s the other stuff they can’t find. We’re thinking in five or more years, less and less product will be available on disc, it will go directly to streaming. Certain companies like Amazon are holding onto their product longer if not indefinitely, so if a company wants to increase their catalogue and make it exclusive, then it becomes a problem. Who knows what that industry will become? Now what happens to Videoflicks? We see nothing changing to upset us in this next 5 years. Time to retire maybe.”

Talking with Joe makes me recall the hours I used to spend wandering aimlessly through the aisles of his store using it as my own IMDb. I’d get as close as I ever would to watching R-rated smut like Jade, learn the inside-outs of staff picks like Larry Clark’s Kids, and terrify myself by sneaking peeks at the box for Stephen King’s It. I once returned back home with Conan the Destroyer just so I had evidence to prove I really was at the video store for the past three hours. It’s all part of the curated experience that both Cohen and Carlino agree is the legacy of the video store.

“A human is able to direct them into something they would never have known to take and end up loving and would come back for more from that same director,” Cohen says. “These search algorithms the young people are finding on websites – they’re not nearly good as a human being.”

As silly as it is to get nostalgic for things we don’t really need anymore (and doing nothing about it), the video store was still a part of how I learned to love movies, where I discovered some of my favourites and became curious about every title that sat on a shelf. It’s a connection that seems unlikely to be replicated by ‘trending’ or ‘top picks’ algorithms (Self/Less? Sometimes it feels like you don’t care at all Netflix).

Actually, I barely remember a thing from Conan the Destroyer, but I do remember that whole day at the video store.