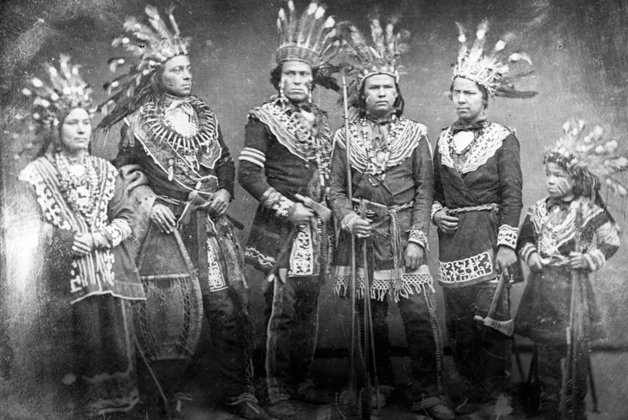 Toronto is developing a new tagline that’s much more appealing than Hogtown, Toronto the Good or the big smoke.

Now we have “Toronto, traditional territory of the Mississauga,” a phrase that opens political meetings these days as speakers remind participants whose land and legacy we are standing on. Even Premier Wynne says it.

But new books by two experts on local First Nations history are reminders that this nod of recognition needs some beefing up.

On June 24 at the Oakville Public Library, Don Smith launched Mississauga Portraits (U of T Press), about eight accomplished Mississaugas of the 1800s and how they negotiated the dangers of that era.

We should start by getting the vocabulary right. According to Smith, Europeans’ “minimal interest in Ojibway language and history” explains the designation “Mississauga.” But they weren’t a small tribe they were members of the Ojibway nation that controlled an area stretching through present-day Ontario and the U.S. Midwest, with a common language and identification.

When NOW consults Margaret Sault, director of lands, membership and research of the Mississaugas of the New Credit First Nation, she’s categorical. “‘Mississauga’ is a colonial word,” she says. “Ojibway, Chippewa – it’s what the Dutch, the British or the French called us. We’re Anishnabe.” That word translates as “human beings.”

By the 1700s, many of these Ojibway were coming south to the mouths of the rivers between Toronto and Lake Erie. In 1805, after their hunting lands had come under pressure from settlers, their culture and health ravaged by disease and alcoholism, they ceded 392 square miles (101,528 hectares), from Ashbridges Bay to Etobicoke Creek, to the Crown at bargain-basement prices in a process fraught with duplicity.

By the 1850s, they’d been driven out of their Credit River reserve and chose to regroup in Hagersville, part of the Six Nations territory near Brantford, where they live today as the Mississaugas of New Credit.

But Toronto continues to suffer from that displacement, says Smith, who points out that we are one of very few major Canadian cities that does not neighbour a reserve or self-governing community of aboriginal people. The Toronto imagination is “cut off from a communal Indian presence,” Smith told me.

All we’re left with are a few place names. “Toronto” and “Ontario,” are Iroquois. But even the Humber River lost its original name – Cobechenonk, for “leave the canoes and go back,” Smith writes. Still, “Etobicoke” is Anishnabe for “place of black alder,” and the “Credit” River derives from European traders of the 1700s giving credit to Ojibway trappers.

This geographical separation is a living challenge for Mississaugas. Says Sault, “I’ve been going to Toronto and Mississauga for over 30 years to present our history if we were closer, we could keep reminding people of our presence. Out of sight, out of mind.”

The Ojibway of the territory we now live in historically practised a sophisticated agro-ecology – multiple uses of land, forest and water for fisheries, corn and other plant food cultivation, wild rice harvesting, berry gathering and woodcutting for wigwams and fuel – quite unlike the farm-centric British colonists, who razed the forests and dammed the rivers essential to the First Nations nuanced food system.

Part of this agro-ecology was the use of some 150 plants as medicines, says Smith’s speaking tour colleague, Allan Sherwin, author of Bridging Two Peoples (Wilfrid Laurier), a bio of Chief Peter E. Jones, one of the first aboriginal physicians.

Wintergreen leaves and red willow bark both anticipated aspirin, and wild cherry bark and berries preceded cough syrup. All these remedies were appropriated by European doctors, says Sherwin, an MD as well as a doctor of pharmacology. Many are standard meds whose makers have never recognized or paid for their indigenous origins. When practised elsewhere, this is called “bio-piracy.”

Sault describes a recent visit to the Toronto Islands, traditionally considered healing places. “We toured with native botanists, and I’ll always remember what they said: Even though the written history can’t always tell you where native people were, the earth can, because the plants will be there. The people planted them. So you will always know where the Mississaugas were.”

The southern Ojibway have a long list of achievements over and above having once occupied this land. I’m not necessarily suggesting that mayors and premiers welcome audiences with a reference to the “land and knowledge stolen from the original inhabitants.” But it is high time we at least do better than “traditional territory of the Mississauga.”