Why a state funeral for Jim Flaherty? 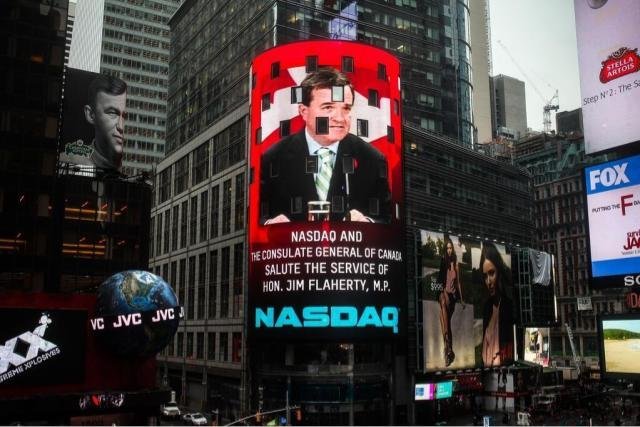 Times Square tribute to Jim Flaherty on the day he announced his retirement from politics.

I’m not surprised because, as a former investigative reporter myself, getting into trouble is part of the job description.

McGregor recently took to Twitter to raise a legitimate question about whether – given historical precedent – former Conservative Finance Minister Jim Flaherty should be afforded a state funeral.

“Is the new standard for a state funeral being well regarded by colleagues? If so, lots more in the future.” McGregor wrote. He has since written a blog in which he points out that cabinet ministers can only qualify for state funerals should they die while in office.

Predictably, the response on Twitter was quick, vitriolic and, of course, ungrammatical.

McGregor’s rather tame query also triggered online push-back among many members of the Parliamentary Press Gallery, who have almost unanimously praised not only Flaherty’s demeanor and character, but his economic record as finance minister.

I understand the inclination, even among journalists, to mourn the passing of a political figure they have come to know intimately and clearly have affection for. This has certainly been reflected in many pieces written since Flaherty’s death and the vignette-driven discussions about his legacy on various television news programs.

In some respects, this response is the understandable product of the shock and timing of Flaherty’s death, coming as it did after he reportedly has a massive heart attack just weeks after his retirement.

As a journalist who is wary of idolatry, I have to admit, however, that some of the media’s unbridled adulation of Flaherty – particularly his tenure as finance minister – is grating and, in a few instances, ethically questionable.

For example, the CBC News operated Your Community Blog organized a “condolence page” to allow Canadians: “To mark [Flaherty’s] death, we invite you to share your condolences with Flaherty’s family and other Canadians.”

A news organization, especially a publicly funded one, should not be in the business of setting up condolence pages for political figures – whatever their party allegiance – since, I believe, it grievously undermines the principle that journalists must remain independent from those they cover. Such a page should be the responsibility of the government that the minister served. (Indeed, Ottawa has, in fact, set up such a page for Flaherty.)

I found the following tweet by Lisa Laflamme, chief news anchor and senior news editor for CTV National News, to be troubling.

“Nasdaq commemorates Jim Flaherty at Times Square today because of his contribution to global economy.” LaFlamme wrote. (The picture was taken, as LaFlamme later corrected, the day he resigned.)

Having worked at CTV and CBC, I know the role of a chief news anchor is to remain independent, and not to even appear to endorse any finance minister’s “contribution to the global economy.”

I also know that my concerns will likely be dismissed as petty and insensitive. But such criticism misses the point. The core principles of journalism should not be rendered irrelevant because, as McGregor noted, a finance minister is “well-regarded.”

And lest anyone believe that my objections are the product of political orthodoxy, I found much of the media’s emotionally charged coverage of Jack Layton’s similarly tragic death to be, on occasion, cringe-worthy.

Another aspect of the media’s reaction to Flaherty’s death that deserves attention is its effusive praise of his record as finance minister. Among many commentators, Flaherty was perceived as Canada’s and perhaps even the world’s economic saviour.

The Toronto Star’s Tom Walkom has defied this construction in a frankly refreshing and sometimes biting column.

Walkom reminded his readers that the former long-time finance minister “was a willing and active participant in Harper’s dark experiment to remake Canada along Conservative lines.”

Walkom adds that to achieve this, Flaherty was “also an integral part of a government determined to smash or cripple much of what makes Canada a liveable country. His death is a reminder that good people can do bad things for the best of motives,” Walkom wrote.

Where Heard sees an expression of personal venom, I see a journalist exercising his necessary, healthy and appropriate duty to question and challenge.

But in the prevailing climate of media unanimity about Flaherty’s impending sainthood, Heard’s overwrought and silly reaction is, I suspect, shared by many other reporters and pundits.

Despite their supposedly skeptical bent, many journalists are prone to building and burnishing myths about all sorts of people, including apparently, finance ministers.

I think that’s the broader and salient point Walkom is making. Indeed, it’s not heresy, but necessary for journalists to challenge this pernicious tendency.