“Once legalization comes in, where are people supposed to smoke? In the park, or are they expected to go to an alleyway? Vapour lounges are a much more civilized way of dealing with a problem," says Abi Roach, founder of Hot Box Café. 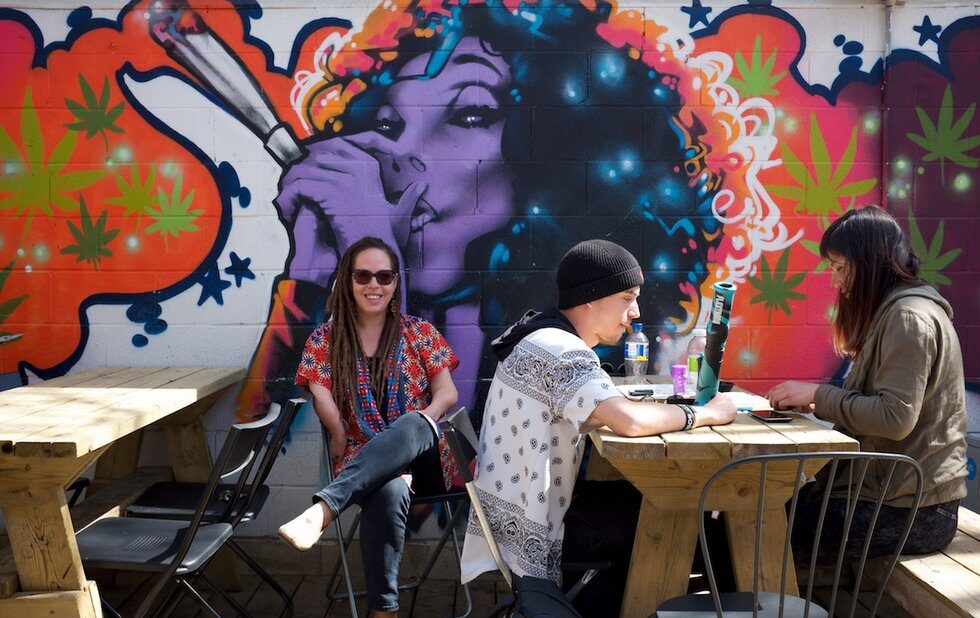 Hot Box Cafe owner Abi Roach sits on the patio with a couple of customers.

Hot Box Cafe owner Abi Roach sits on the patio with a couple of customers.

When David Deif wants to smoke a joint – which is often – he’s grateful to have a place that lets him do just that. As a premium member of Kensington Market’s Hot Box Café, Deif is grateful to have a space not just to smoke freely, but to connect and bond with other people in the neighbourhood.

“I live with a family, so it’s not fair to smoke there,” he says in a thick Italian accent. “I can smoke there, but I’d prefer to smoke here.”

Deif works down the street at a pizza shop, and has been frequenting this particular vapour lounge for the past three years. He sits in a private room, which is meant for special members, on a puffy brown leather couch with a laptop that’s playing a soccer game.

“I come here every day after work, or if I don’t work, I come here and then get on with my day,” he says.

A few other, multigenerational members start to file into the room, which houses a big screen TV. They all greet each other warmly, as they settle in to break up their buds and rolls joints. One of the members is an elegant elderly woman named Dianna, who wears lace, fingerless gloves.

“I practically live here, I’ve been coming for 10 years,” she tells me. (She didn’t want to divulge her last name.) “You meet people from all over the place here. Marijuana people are a lot better than people at the bar.”

Neighbourhood vapour lounges differ from bars in that they often offer multi-purpose space. Part head shop, community centre, venue, and café, lounges are meant to be a safe space for people to smoke their personal stash. Alcohol is generally not allowed, and is rarely served, making the atmosphere decidedly chiller (read: not aggro) than a bar. Members must bring their own supply, though there are bongs and dab rigs they can use. “Fishing,” or soliciting bud from others, is prohibited.

Last year, Ontario lounges dodged a legal bullet after they became exempt from Bill-178, which was set to amend the Smoke Free Ontario act, which would prohibit medical marijuana from being smoked anywhere regular smoking was banned.

“We’ve pushed the limits of what we can do, along with what the courts and governments have told use to do,” says Abi Roach, who opened the multi-room Hot Box Café lounge in 2000.

Staff at vapour lounges are meant to help customers whenever possible, whether they need help with rolling a doobie or support if they’ve over-consumed. At Hot Box, they keep bananas, orange juice and a special CBD mixture meant to counter the THC, for people who “green out.”

Roach says now it’s more important than ever to have these types of spaces.

“Once legalization comes in, where are people supposed to smoke,” she asks. “In the park, or are they expected to go to an alleyway? Vapour lounges are a much more civilized way of dealing with a problem.”

Roach is committed to supporting her neighbourhood and community, and hires local artists to create murals around her space. She estimates that her lounge served 75,000 customers last year, including many tourists who can’t smoke in their hotel rooms. She says about 30 per cent of visitors, like Dianna and David, are die-hard regulars.

“They come every single day, like clockwork,” she says. “This is their family, their home, their community.”