NOW MagazineNewsWhy it’s impossible to indict a cop in America

Why it’s impossible to indict a cop in America 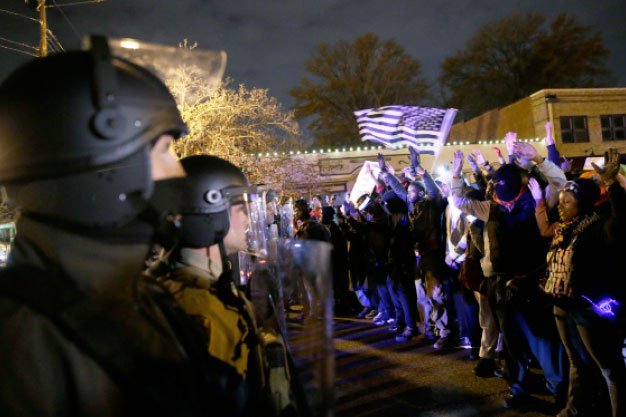 How to police the police is a question as old as civilization, now given special urgency by a St. Louis County grand jury’s return of a “no bill” of indictment for Ferguson, Missouri, police officer Darren Wilson in his fatal shooting of unarmed teenager Michael Brown. The result is shocking to many, depressingly predictable to more than a few.

Can the cops be controlled?

It’s never been easy: according to one sociological chestnut, the monopoly on the legitimate use of violence is what defines modern government, and this monopoly is jealously protected against the second-guessing of puny civilians. All over the country, the issue of restraining police power comes into focus around the accountability of individual cops, from Staten Island to Milwaukee to Los Angeles. But is this the best way to impose discipline on law enforcement?

Last year, the FBI tallied 461 “justifiable homicides” committed by law enforcement – justifiable because the Bureau assumes so and the nation’s courts have not found otherwise. This is the highest number in two decades, even as the nation’s overall homicide rate continues to drop. A USA Today analysis of the FBI database found an average of about 96 police homicides a year in which a white officer kills a black person.

The FBI’s police homicide stats are fuzzy, and they are surely an under-count, given that they come from voluntary reports to the FBI from police departments all over the country. That the U.S. federal government does not keep a strict national tally shows just how seriously it takes the problem.

But perhaps the most disturbing thing about these police killings, many of them of unarmed victims, is that U.S. courts find them perfectly legal.

Chapter 563 of the Missouri Revised Statutes grants a lot of discretion to officers of the law to wield deadly force, to the horror of many observers of the Ferguson story.

The statute authorizes deadly force “in effecting an arrest or in preventing an escape from custody” if the officer “reasonably believes” it is necessary in order “to effect the arrest and also reasonably believes that the person to be arrested has committed or attempted to commit a felony… or may otherwise endanger life or inflict serious physical injury unless arrested without delay.”

This standard originates in the 1985 case of Tennessee v. Garner, which appeared at first to tighten restrictions on the police use of deadly force. The case involved a Memphis cop, Elton Hymon, who shot dead one Edward Garner: 15 years old, black and unarmed. Garner had just burgled a house, grabbing a ring and 10 bucks. The U.S. Supreme Court ruled that a police officer, henceforth, could use deadly force only if he “has probable cause to believe that the suspect poses a significant threat of death or serious physical injury to the officer or others.”

All this appeared to restrict police violence – even if, in the end, Hymon was never criminally charged for fatally shooting Garner.

“Objectively reasonable” – what could be wrong with that? But in actual courtroom practice, “objective reasonableness” has become nearly impossible to tell apart from the subjective snap judgments of panic-fuelled police officers.

American courts universally defer to the law enforcement officer’s own personal assessment of the threat at the time. Wide latitude is granted to the officer’s account of the situation, even if scientific evidence proves it to be mistaken.

Such was the case of Berkeley, Missouri, police officers Robert Piekutowski and Keith Kierzkowski, who in 2000 fatally shot Earl Murray and Ronald Beasley out of fear that the victims’ car was rolling toward them. Forensic investigations established that the car had not in fact lurched toward the officers at the time of the shooting, but this was still not enough for the St. Louis County grand jury to indict the two cops of anything.

“There is built-in leeway for police, and the very breadth of this leeway is why criminal charges against police are so rare,” says Walter Katz, a police oversight lawyer who served on the Los Angeles County Office of Independent Review until it disbanded in July.

An officer’s personal threat assessment is often bolstered by the fact that there are between 270 million and 310 million guns in the United States. Take the grand jury’s failure to indict the police officers who fatally shot John Crawford III, the black man holding a BB gun in a Walmart in Beavercreek, Ohio. In a country where shooting sprees are a regular occurrence, where guns are widely available at Walmart and where fake guns that look very similar to real guns are sold in the same store, the police officers’ fears were deemed reasonable enough for the grand jury to find no probable cause of criminal wrongdoing.

That is how the Supreme Court police violence jurisprudence works, and it was firmly on the side of Beavercreek officer Sean Williams, just as it has now been found to be on Darren Wilson’s.

The first step to controlling the police is to get rid of the fantasy, once and for all, that the law is on our side. The law is firmly on the side of police who open fire on unarmed civilians.

Civil suits for monetary damages require a lower standard of proof than criminal cases, but these suits are not a slam-dunk for victims of cop violence either. The same jurisprudence that grants wide leeway to law enforcement still holds.

Last March, one victim’s family lost a federal civil suit for wrongful death and civil rights violations brought against police officer Nicholas Bennallack for fatally shooting a fleeing and unarmed drug suspect. The jury believed the cop’s claim that he opened fire out of fear for his life.

Occasionally the federal Department of Justice intervenes to prosecute individual cops for depriving a victim of his or her civil rights. If a state-level prosecution fails to secure a conviction, this can give the government a second chance to prosecute on different charges. Rodney King’s LAPD assailants were convicted in 1993 in just this way.

But the feds, like other prosecutors, only like to take on cases they can win, says Alan Vinegrad, one of the federal attorneys who prosecuted the NYPD officer who in 1997 sexually tortured Abner Louima with a broken-off broom handle.

Will the Obama DOJ take on the Michael Brown case? It doesn’t look like it.

Eyewitness testimony is conflicting, and so far the multiple forensic reports that have come out are not inconsistent with Wilson’s version of the shooting – which would make the federal standard of willful misconduct difficult to prove. The DOJ has signalled with leaks that it is backing away from a federal case against the officer.

Police shootings are only one function of living in one of the most heavily policed societies in the world. Any movement to roll back this creeping over-criminalization will have to look beyond criminal prosecutions of individual police and take in the big picture.

Wanton over-policing had poisoned relations between the people and their government well before Wilson shot dead Brown.

The local government in Ferguson has been treating its residents and neighbours less like free people with rights than like revenue milk cows to be exploited to the max. Citations and fines for petty offences are profligately inflicted on residents, particularly black residents. According to a blockbuster report issued by St. Louis’s ArchCity Defenders advocacy group, over 20 per cent of city revenue comes from municipal courts (making them the city’s second-largest source of revenue).

Not surprisingly, high on the list of demands at one Ferguson community forum was an end to the “over-policing and criminalization of poverty,” an amnesty for old unpaid warrants, new fines proportioned to income and a state law capping municipal revenue from court fees at 10 per cent. (Terrified by the Ferguson unrest, the city of St. Louis decided to eliminate 220,000 open arrest warrants for traffic violations last month.)

The feeling of being under occupation by an armed force that cares more about meeting revenue quotas than public security corrodes all trust in law enforcement, and is the sort of environment in which police are more likely to open fire.

The state of emergency that Missouri governor Jay Nixon declared on November 17 seems all too likely to encourage police overkill.

Chase Madar is a civil rights attorney in New York and the author of The Passion of Bradley Manning: The Story behind the Wikileaks Whistleblower. A longer version of this story was originally published by theNation.com.