Chris Pommer and Andrew Frontini weigh in on the past, present, and future of Toronto's most important civic space 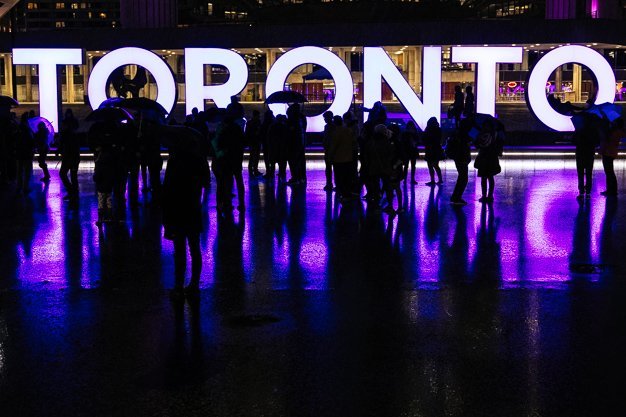 Fans gather for a Prince tribute at Nathan Phillips Square on April 25.

On Wednesday, September 21, the City of Toronto held a small presentation and reception on the new stage at Nathan Phillips Square to celebrate the end of a hard-fought 10-year revitalization project.

Not the completion of the project, mind you, but merely the end of construction for the immediate future. After all, the architects had just been awarded a Governor General’s Medal, despite their original vision being only a little more than half realized.

What they accomplished was remarkable, both honouring and updating the modernist aesthetic of Viljo Revell’s original 1965 design to help it better achieve its intended purpose. But complicating this victory is that in the decade since the revitalization began, the site has increasingly been recognized as the product of a rather thorny history involving the gradual demolition of the Ward — a dense immigrant neighbourhood that stood in the area from the mid-19th to the mid-20th centuries.

Following the ceremony on September 21st, I caught up with the architects behind the revitalization to talk about the Ward, their efforts to revivify the square, the incompleteness of the project, and the famous TORONTO sign whose future remains uncertain. This interview has been edited and condensed.

What do you think of how the Art Gallery of Ontario’s Lawren Harris show compared the artist’s erasure of the Inuit from his paintings with what happened to the original communities and urban environment that were here prior to the 1950s?

Chris Pommer, partner at Plant Architect Inc.: What happened to the Ward was definitely typical of that period. Across North America and other parts of the world, there was a sense that so-called “urban renewal” — or in more direct terms, “slum clearance” — was a way to rejuvenate cities. And there’s no question, especially now with the benefit of hindsight, that there were serious problems with that strategy.

That being said, Toronto at the time was the second city of Canada — Montreal was where everything really happened — and it took a gamble: that opening up a huge space in the middle of the city and building a building that, 50 years later, still looks like it’s from the future was an opportunity to redefine where Toronto was gonna go. There was an idea that the future was something good and positive and that we should embrace it. And for all of the displacement and the troubling aspects of what went on, I think that it was also an incredible gift to the city.

When the city embarked on the effort to renew the square, they pointedly called it a “revitalization,” not a redesign. And of the competition’s four finalists, yours was the least radical proposal in terms of making it over. How did you try to find that balance between preserving the things that worked and fixing the elements that didn’t?

Andrew Frontini, Ontario design director at Perkins+Will Canada: I think the competition jury appreciated that our design was very intelligent in understanding the existing space and its ideals: its approach to democracy, its approach to urban theatre, and its potential — perhaps unrealized — to create this public arena for spectacle and enjoyment that we see now. I think what’s significant is that there have always been celebrations in Nathan Phillips Square, but never at the scale and with the energy that you have now with things like Nuit Blanche and the Pan Am Games. And it’s because we set the reset button and got back to the basics of the original vision — an open space of pure potential. But with new supporting spaces on the sides that make it work: somewhere to get dressed, somewhere to change, somewhere to buy food, and somewhere to overlook. 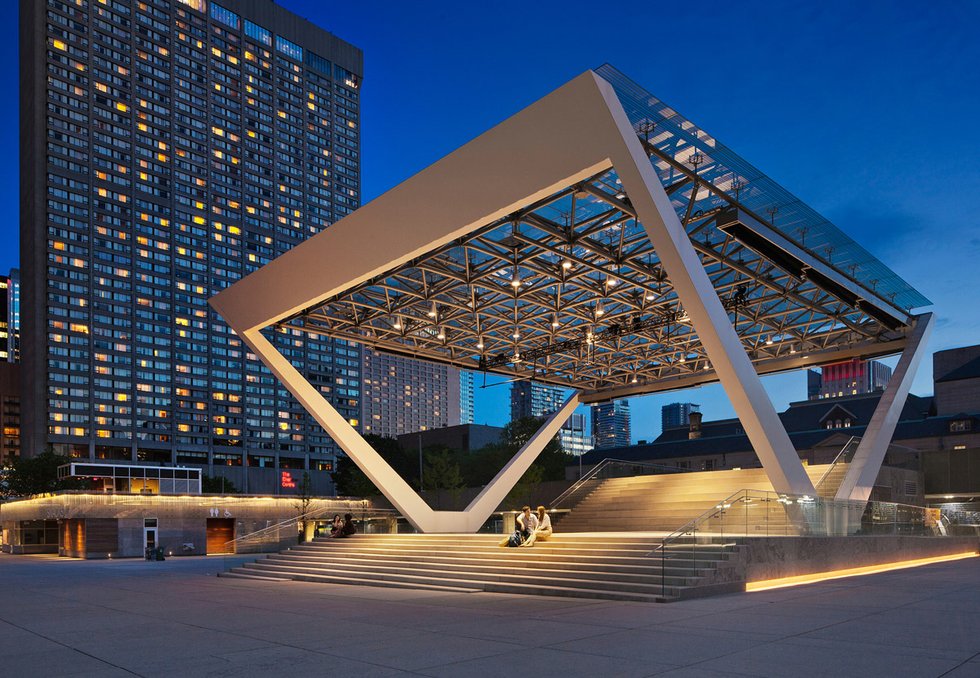 In terms of your own original design, to what degree would you say it was completed?

Pommer: Clearly, the project is not complete. As with any large-scale project and any city project, there’s “value engineering” that goes on. Near the beginning, we made it very clear to the city that if reductions needed to be made, for budget reasons or whatever, we wanted to build fewer things and do them well than try to scrape the butter too thinly across the toast. So the pieces that have been executed — the Peace Garden, the theatre, the skate pavilion, the green roof — those were all done fully. And there are other things that just haven’t been completed because it takes time, sometimes, to make sure that a budget is there.

Frontini: But I think they have the potential to inspire a next generation of development. They set a standard for it. And you know, the drawings are all stamped “approved,” ready to build. There’s a building permit. So the red tape, in a way, is not there. All you need is to inject the cash. And I think people are starting to see the potential that the revitalization holds.

What element from your design would you want built out next?

Frontini: I really feel that the elevated walkways should be the next step because all of these spaces are about getting up to the next level. The theatre is a staircase to the next level. The Peace Garden is a terrace to the next level. The skate pavilion, same thing. The podium is an elevated public realm. If we can link this experience together with what was really designed as a beautiful linear garden — with furnishings, plantings — then we can really enjoy that upper level and it can be part of this very unique linear park. 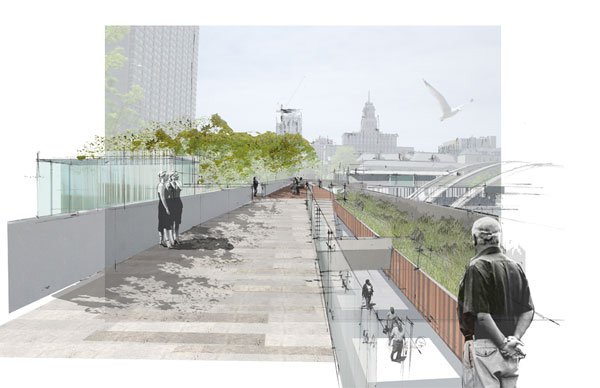 How much say did you get in determining which elements to build when?

Pommer: It was a discussion. The City was really, really respectful of the design team and the original design. Everyone who worked on the project understood that it was important to see it through as imagined and not to try and water things down. So obviously, there were challenges, but the City was very good about involving us in those kinds of decisions.

Pommer: I think that as a temporary, event-based object, it’s fantastic. During Pam Am, it was great, it was this magnet that brought people into the square, that got people excited, that people physically interacted with. I think that from the perspective of — and this is not the sensitive designer speaking — from the perspective of someone who’s worked for almost a decade on trying to reopen the square so that basically everything can go on, to put something like that in permanently not only begins to undermine the process of creating that openness, but I think also takes away from the specialness of that event. Because when Pan Am was on and you took your selfie with the TORONTO sign behind you, it was a record of being there during the celebrations. And now it’s something that is just there all the time, and it means that the specialness of the original thing is gone.

Frontini: It’s kind of a guest that shouldn’t outstay its welcome. Because it wasn’t physically made to last, it’s starting to look a bit shabby, and I hope that doesn’t go too much further because my assumption is it’s going soon. What’s nice about it is that people took the spirit of this being a space where anything can happen and did that. To put an outrageous object in there and have fun with it. This is a giant room for a big party at the scale of a city. It’s when things… It’s like when you leave your Christmas tree up until October of the next year, right? 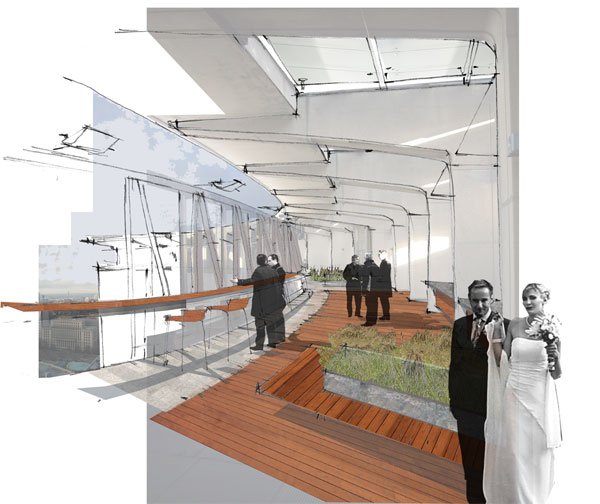 Frontini: They love it! They love it! But I think they could love something else, right? Like, there’s gonna be another big crazy sign or an inflatable emoji.

Pommer: We’ve had many discussions with various people at the city about the TORONTO sign and whether it should stay or go. And one of the arguments made is that, “Look! People come into the square and they stand there at the corner of the pool and they take their picture with the TORONTO sign, and it’s really animated things.” I’ve been watching this square for much longer than the decade that we’ve been here. People have come to that spot and taken their picture in that direction because they’re coming to Toronto City Hall, and it’s this incredible spaceship that’s landed from the future and they’re taking their picture with it. The number of people who are taking that picture hasn’t increased it’s just now there’s a hashtag to go with it.

So I think that the contribution that the TORONTO sign is making to our culture is maybe overstated. Let’s enjoy it while it’s here, but let’s enjoy something else sometime in the future.

Frontini: Well I mean, I hope the plan is not to restore it.

If someone did want to commemorate the pre-1950s history of this area, either on site or nearby, what do you think the best form for that would be?

Pommer: Over the 50-year life of the square, many things have been given to the city to be placed on it, the Winston Churchill statue being the largest. Part of our strategy was to collect them in a place that gave them some coherence. So I think it would be appropriate for there to be some memorial or didactic object that talks about the history of the Ward. I think that there’s room for something appropriately scaled in that area on the west side of City Hall.

Frontini: I think that the story of the Ward should continue to be told until it’s widely known, because there’s a kind of — I don’t know if “cautionary” tale is the right word — but certainly a tale about the importance and meaning of urban fabric, in terms of the communities that it welcomed, supported, and nourished, and how the city has evolved to where it is. It’s very important to understand the pieces of the timeline. Toronto’s really good at erasing our history and then commemorating it later. What’s unfortunate is that you see these commemorations or façades of old buildings erected on the faces of large skyscrapers. It’s not the same. That’s not what architecture means. It’s the actual built fabric and the community that lives in it. So if it’s gone, you have to find a way to tell the story rather than create a series of small effigies. You can’t really capture a city in a plaque.

Toronto has a tendency to enthusiastically destroy and erase its own history, and the question is, is it possible to reclaim that moving forward?

Pommer: I would ask the same question about what is gonna ultimately be remembered about Regent Park. I look at the waterfront and the pretty comprehensive erasure of the industrial architecture and heritage there. These are things people forget…