On Thursday morning, Black Lives Matter Toronto held a press conference to address the controversy kicked off by their. 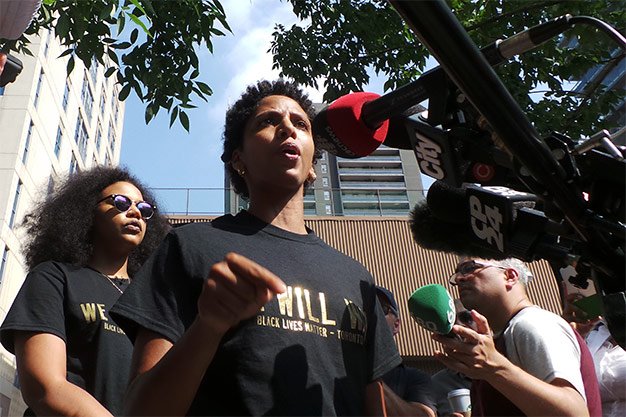 On Thursday morning, Black Lives Matter Toronto held a press conference to address the controversy kicked off by their disruption of Sunday’s Pride Parade, where they halted the procession for 30 minutes until Pride Toronto agreed to create a more welcoming environment for people of colour at future events. Among their demands (see sidebar here) was that official police floats and booths be removed.

We promise we’ll address the substance of the press conference in the coming days, but first we would like to share this actual question asked by an actual reporter from an actual news outlet that isn’t even one of those Ezra Levant-affiliated ones:

“The Santa Claus Parade. The police are involved in that. Is that something you guys would consider [for a] sit-down or protesting?”

That was CTV News’ John Musselman, so thoroughly misunderstanding all the relevant issues that BLMTO initially did him the favour of not dignifying him with a response.

“Sir, were here to talk about Pride,” said co-founder Alexandria Williams. “Im not really here for questions like that that are trying to demean what were asking for our community. Are there any other questions?”

But Musselman persisted, annoyed that his wasn’t being treated as a serious line of inquiry.

“The police are involved in that parade. Why dont you want to answer my question?” he challenged, with the confidence of a man who believes he has cornered his subjects on a great hypocrisy.

“Are there any other questions?” Williams asked again.

Behind her, Janaya Khan, another of the group’s co-founders, quietly consulted their colleagues. “Can I make fun of it?” Khan whispered.

Finding support for this course, Khan took the mic and explained: “So, last time I checked, Santa Claus wasnt of a marginalized community. Last time I checked, he was a portly, well-fed, jolly white man who lives in the North in a giant home and has an entire industry that he can rely on. So I think hes okay. I think Santa Claus is cool. But thanks for that.”

So no, the Santa Claus Parade is not about leveraging visibility to liberate queer bodies from past and present systems of oppression, nor a political march whose creeping militarization threatens to undermine the radical ideals at its core. It is a slightly different thing.

@jmusselmanctv is that going to be before or after the news stories on Alton Sterling and Philando Castile?

Tune in to find out!