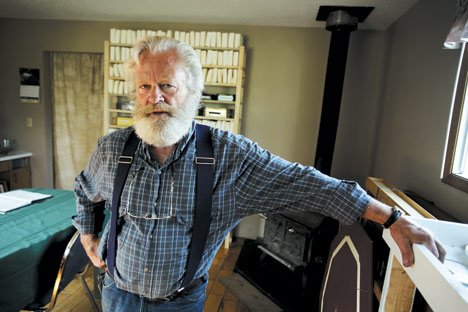 Controversial eco activist Wiebo Ludwig is obviously trying to clean up his image.

Ten years ago, he was painted as an out-of-control fanatic, so furious with gas companies for poisoning his water that he sabotaged their wells and alienated his neighbours.

Lately, Ludwig’s been presenting himself as a reasonable man who’s meeting with the townspeople who once shunned him and talking nice with the gas companies.

“There was a period when I was too angry,” he says on the phone from his Trickle Creek alternative Christian compound in northern Alberta. “I’ve apologized for my rhetoric of desperation. I got pretty angry. I was sick and tired of the gas companies’ recklessness. I’m trying to take a different approach.”

The story starts with Ludwig making the trek to build his compound in 1985.

“We just wanted to be left alone so we could stay true to reality and the fundamental meaning of the Scripture,” he recalls. “And then the industry came here.

“We didn’t understand the dangers. We talked to chemists and environmentalists who filled us in on what was going on. We kept a diary so we could see the patterns, and soon we realized there was a serious environmental concern at our doorstep. We wrote to the authorities and the companies. They thought they could keep us ignorant.”

In the late 90s, chemicals began seeping into the water, thanks to the oil companies’ horizontal drilling technique (the doc Gasland deals with the phenomenon, too). An astonishing image in Wiebo’s War shows the water coming out of his tap bursting into flames when a lit match is held to it. Ludwig’s sheep began aborting, and the women in his family began miscarrying. He took action, eventually doing jail time on various charges related to gas well sabotage.

He’s always been obsessed with documenting his interactions with Big Oil and Gas and federal authorities. When Encana began digging wells on the periphery of his land, the Ludwigs noticed changes in their water and started complaining to the company. The film footage he began shooting once he started getting major push-back from Encana (he recorded every interaction with gas companies and federal authorities) form the backbone of the film.

Ludwig says his decision to do his own documentation did not arise from paranoia.

“We shot to counteract the nonsense around us,” he explains, “that we were radical and over-the-top when it came to the environment. We were trying to let people know where the real struggles were on this land.”

Listening to the man talk, you could almost forget that he’s the head of a fundamentalist Christian household. It’s not a cult his daughters and his wife, Mamie, are strong, articulate figures in the film. And he reminds me that the kids aren’t chained to posts or wearing tracers on their ankles – they can leave whenever they want.

But there is a bit of a creep factor. Ludwig moved his family to Trickle Creek with the Boonstra clan, whereupon three Boonstra daughters married three Ludwig sons, which suggests more than a bit of controlling behaviour on the fathers’ parts. And the sequence where Ludwig shows a miscarried fetus to the Ludwig clan (including his small children) is just plain icky.

Add to that the fact that Ludwig often sounds like he’s rehearsed our conversation. Wiebo’s War director York spent two years between 2008 and 2010 filming at Trickle Creek and environs. He knew that Ludwig was a savvy guy.

But York also sees beyond that image.

The community around him was getting antsy with the Ludwig clan. They didn’t hate the oil and gas companies. In fact, they kinda liked the money those industries were bringing into the community.

“Then I realized that the most profound effects of sour gas poisoning are in utero and in early development of livestock and miscarriages. The effects are concentrated on the unborn and the newborn, and elderly neighbours aren’t worried about that.

Ludwig’s neighbours’ disenchantment peaked when, at the height of his eco-activism in 1999, a teenaged girl trespassing on Trickle Creek with a crowd of young boys in a truck was shot and killed by one of the Ludwigs. It was never clear who pulled the trigger, and no charges were laid.

York says Ludwig was at his most slippery on that issue at the time. And although Ludwig pointedly tells me he’ll answer any question I have, he shuts down when I ask about the shooting.

“I’m not interested in unravelling the complications of that,” he says.

He’s more interested in pumping his image as a lover of the planet. Give him credit. His religious views may seem positively retro and reactionary, but he’s way ahead of his time when it comes to his eco-lifestyle.

“I’m entirely off the grid,” he says proudly. “We have all our own energy, we run bio-diesel, wind, solar and bio-thermal, and we have hot-water heating from the sun. So we don’t need the energy. We’re close to 85 per cent fossil-fuel-free and should be entirely fossil-free in four years.

“That’s why people want to come here. They want to pick up on some of the things we’ve done.”

He’s desperate to dispel people’s assumptions about him, trying instead to promote his new user-friendly approach.

“I don’t believe in an us-and-them scenario. We’re in this together. That’s not just political. None of us is that virtuous. We’ve all been involved in the energy system, because we’ve been blinded by our own needs, which we think are heavy needs.

“I’m still angry that things are happening, but not in the same way. I want to talk it out. The only way we can get resolution is when we can persuade. I’m not interested in creating bogeymen and permanent hostility.

“We have to find ourselves as human beings.”

But Ludwig can’t help himself.

As our interview is coming to an end, he asks if I’m married. I explain that I’m a lesbian in a 25-year relationship and that we have a beautiful daughter.

Well, no. In fact, by the time we’ve reached this part of the conversation, I’ve tried to get off the phone at last three times.

“What we need is understanding and not alienation,” he allows. “I look at lesbianism as symptomatic of reactions to pain and trouble. You may find that insulting”

On his mis-spent youth

On exposing his children to outside values