If you want to see sheer delight. 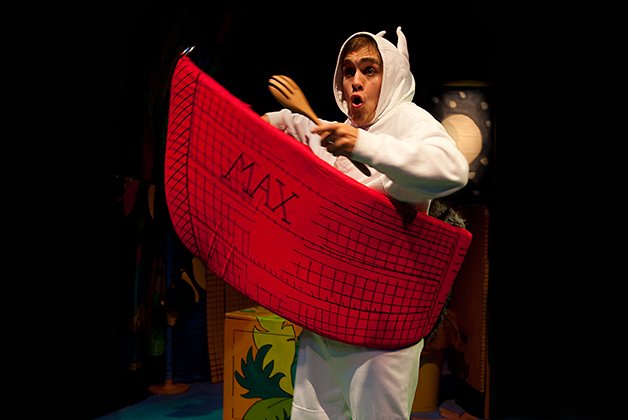 Where The Wild Things Are

If you want to see sheer delight on the faces of children between the ages of three and seven, yours or someone else’s, introduce them to theatre with a trip to Where The Wild Things Are, currently at Young People’s Theatre (YPT).

A production by Vancouver’s Presentation House Theatre and directed by Kim Selody, the show is based on the classic Maurice Sendak story about Max, who’s so rambunctious that his mother sends him to bed without dinner. Angry with her, he creates his own fantasy world and travels to the island of the Wild Things, where they crown him their ruler.

When he grows sad and lonely, of course, he returns home to a hot dinner from his mother.

This isn’t the first time the show has played at YPT, but in this version the two actors joyously draw the young audience into the show. Raes Calvert is a beguiling Max, able to show his unruly side without making us dismiss him, and there’s no warmer, more welcoming mother/narrator than Linda A. Carson, who seats audience members on one of three coloured floor mats that function as islands and encourages us to become the characters Max meets on his sea journey.

As the youngsters are asked to growl, make scary faces and put on animal masks recognizable from Sendak’s drawings, you can see the delight with which they play their parts, using their imaginations to become waves, seagulls and seals as well as the island’s inhabitants.

The adults in the audience aren’t outsiders, either, for they help to turn Max’s bedroom into a magical world of vines and trees those vines snake back and forth around the theatre, enveloping everyone at some point.

The production continues though March 30, with added performances during March break.

Have you ever used Indiegogo, Kickstarter or another crowdfunding platform to raising money for your independent arts group?

The Toronto Fringe has launched a Canadian website to do just that, and it can be used not just by theatre and dance troupes but any indie artist across the country. You don’t have to be involved in the Fringe or live in Toronto to post your project.

Fund What You Can (FWYC) allows artists to create and manage their own crowdfunding campaign, giving them a more targeted market, and for the first six months of operation (until August 31) no platform fees. Other platforms charge between four and 10 per cent of the funds raised. And all transactions are in Canadian funds, so no exchange rates are necessary.

FWYC, with an obvious nod to pay-what-you-can (pwyc) performances, has been designed to work in tandem with the Fringe’s three central programs: the summer Fringe Festival, the winter Next Stage Festival and the year-round Creation Lab.

Each entry has a video about its project, in case you’re considering donating.

Last week we reported on the four finalists for the third annual Gina Wilkinson Prize, all of whom are transitioning from an area of theatre into directing, as did the late Wilkinson.

The winner of the 2014 award is Christine Brubaker, best known as an actor, who began directing three years ago with Eric Woolfe’s Madhouse Variations. She’s currently working on an MFA in interdisciplinary arts, teaching at Young People’s Theatre and will be part of this spring’s Michael Langham Workshop for Classical Direction at Stratford.

Over at the Tarragon Theatre, this year’s Urjo Kareda Residency Grant for an emerging artist has gone to playwright and multidisciplinary theatre creator Jordan Tannahill.

He receives $15,000 to spend 20 weeks at the Tarragon developing his craft as a playwright – he has two plays in development – while facilitating the work of others at Videofag, the Kensington Market storefront arts space he runs with partner William Christopher Ellis.

The Theatre Centre’s new home, a former Carnegie Library on Queen West, opens officially Wednesday (March 19) with a performance of Alanna Mitchell’s Sea Sick, adapted from her book about the changing global ocean and why it matters.

The show, featuring Mitchell and directed by the Centre’s artistic and general director, Franco Boni, with artistic director-in-residence Ravi Jain, runs through March 23.

The opening-day events include a launch at 11 am, followed by a community open house beginning at noon.

We’ll have an interview with Boni about the importance of the new building, the development of the Theatre Centre under his watch and Mitchell’s show in next week’s paper.