NOW MagazineMusicUpdate: Riot Fest Toronto will not happen this year

Update: Riot Fest Toronto will not happen this year 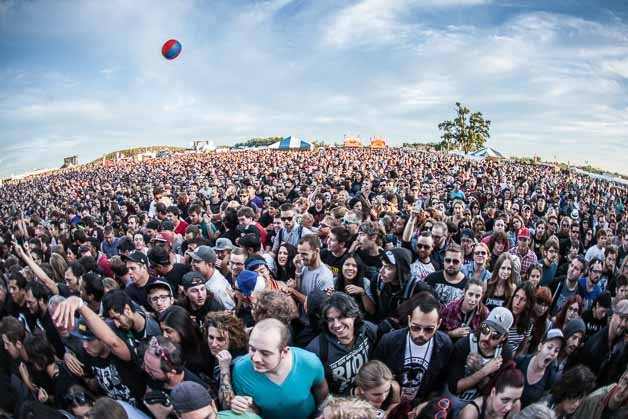 The crowd for Death From Above 1979's set at the 2014 edition of Riot Fest. Photo by Nic Pouliot.

UPDATE (May 13, 2016): Riot Fest organizers have confirmed the Toronto edition is definitely not happening this year.

“With recent local changes in Riot Fest’s partnership in Toronto, the planning process and resources required in staging a fest in Ontario was no longer compatible because of the available timeline,” the statement reads. “Riot Fest 2016 will only take place in Denver and Chicago. We have every hope that we’ll be back in Toronto in the near future.”

Shortly after confirming the Toronto news, Riot Fest announced the original Misfits line-up of Glenn Danzig, Jerry Only and Doyle Wolfgang Von Frankenstein is reuniting for the first time in 33 years to play the Denver and Chicago festivals in September.

For the past four years, Calgary-and-Edmonton-based promoter Union Events has co-presented the Toronto edition of the independent rock/punk/hip-hop-focused festival with the event’s Chicago-based founders. (Riot Fest started in Chicago in 2005 and later expanded to Denver and Toronto. Organizers partner with local co-promoters when staging the festival outside Chicago.)

A spokesperson for Live Nation told NOW that the deal excludes Riot Fest Toronto, “which will not be promoted by Live Nation Canada.”

Reached by NOW, Riot Fest’s Chicago-based founder could not confirm whether the Toronto edition would go forward, since organizers were still exploring their options.

“We wish Union Events the best of luck in their new venture,” Mike Petryshyn said in a statement. “They’ve been great partners and have become our close friends. We are still sorting through the future plans for Riot Fest in Toronto but would like to thank the fans for their support these past four years.”

The last Riot Fest Toronto took place at Downsview Park on September 19 and 20, 2015, and attracted 20,000 people per day. The lineup included Motörhead (it ended up being their final show in Toronto), Alexisonfire, Weezer, Rancid and Tyler, the Creator.

Dates and early-bird ticket info for this year’s Denver and Chicago editions of Riot Fest have been announced already. Meanwhile, the 400 shows currently booked by Union Events across the country for 2016 will go ahead as planned before the company’s touring business transitions to Live Nation Canada.

Union Events founders and co-managing partners Harvey Cohen and Nhaelan McMillan, as well as “other key members of the Union Events team,” will join Live Nation Canada. Live Nation’s spokesperson declined to comment on the number of Union staffers laid off as a result of the merger.

An earlier version of this story was published on February 23.