NOW MagazineNewsWith or without you(r foreskin)?

With or without you(r foreskin)? 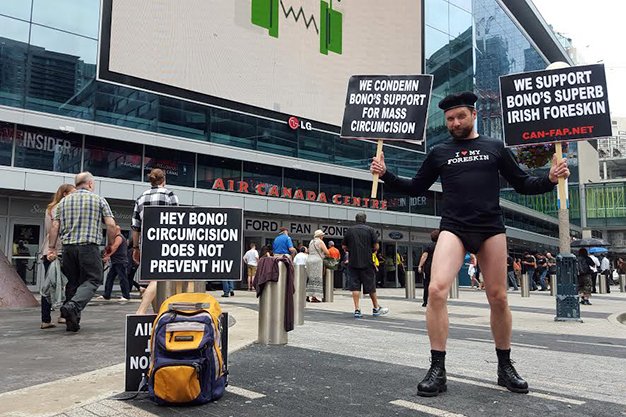 Glen Callender outside of the Air Canada Centre

Bono has a lot of fans. They adore him. They love every part of him. It’s likely the U2 front man has grown accustomed to constant adoration over the years. It’s also likely that he’s never received adoration quite as pointedly specific as that espoused by one lone protester standing outside Toronto’s Air Canada Centre this past Tuesday evening holding a sign that read: “We Support Bono’s Superb Irish Foreskin.”

That protester was Glen Callender, founder of the Foreskin Awareness Project. The Vancouverite has been standing outside of every Canadian date of U2’s current world tour to bring awareness to Bono’s public support of circumcision to prevent the spread of HIV in certain countries in Africa.

“It’s kind of hard to fit on a sign,” admitted Callender outside of the Air Canada Centre Tuesday night. He was dressed in his customary protest getup — black combat tam, polished army boots, black briefs and a black shirt emblazoned with the surprisingly incendiary phrase “I love my foreskin.” In addition to his sign supporting Bono’s supposed foreskin (Bono has not confirmed nor denied whether he himself has been circumcised), he also had one reading “Circumcision does not prevent HIV” and “We condemn Bono’s Support for Mass Circumcision.” This is just stop number three on Callender’s six-city “Foreskin + Experience” protest tour, as he trails U2’s “Innocence + Experience” tour across Canada and into the U.S.

You see for Callender, when it comes to the foreskin, it really is the sweetest thing.

He loves his foreskin so much, his life’s work is keeping the world’s foreskins intact. He’s led heavily publicized one-man campaigns against what he has deemed anti-foreskin public figures like Oprah (foreskin wrinkle cream!) and Bill and Melinda Gates (pro-circumcision!). And now he’s got Bono in his crosshairs.

At issue is Bono’s support of the World Health Organization’s (WHO) use of circumcision as a method to prevent the spread of HIV in certain countries in East and Southern Africa.

In a 2011 New York Times Op-Ed piece, Bono wrote that, “New research proves that early antiretroviral treatment, especially for pregnant women, in combination with male circumcision, will slash the rate of new HIV cases by up to 60 per cent.”

“The program is a damaging distraction from what works, which is condoms,” says Callender. He acknowledges that the official WHO campaign maintain that circumcised men must still wear condoms to prevent HIV transmission, but says this info doesn’t always trickle down.

“These men believe they are safe,” says Callender.

In what is of course a wildly complicated and nuanced issue, let’s just say that WHO, AVAC, and pretty much every major international organization working to reduce HIV transmission in Africa tends to disagree with Callender’s main points, standing by the research that has found circumcision to be effective in the prevention of HIV transmission.

He’s hoping that Bono will respond to his call for a foreskin-related dialogue, hear him out, and then begin advocating against circumcision. Callender has contacted the band’s management and has been furiously tweeting at Bono and U2.

Bono’s response to the foreskin crusader parked outside his shows?

“Well, there hasn’t been a reaction,” says Callender. “…Yet. I’m optimistic that Bono may reach out. I’m pretty hard to ignore out here.”

Yep, pretty hard to ignore. Callender had a consistent crowd of giggling onlookers standing at a safe distance with iPhones extended and snapping. A lot of Bono’s fans wanted to get right in there, including one midwife, who had her photo snapped alongside him, saying, “I support you!”

Others were less enthusiastic. One man walked by, muttering profanities at Callender as he passed.

“Did you hear that,” scoffed Callender. “He probably doesn’t have a foreskin.” He shook his head. “Every circumcised guy has an intact friend now, and he will say, hey, my foreskin feels really good, I enjoy my foreskin.”

A visibly intoxicated young man came up to get a photo. Callender put his arm over his shoulder and began making casual conversation.

Callender nodded and smiled as the man stumbled away, giggling with his buddies.

“Men are hearing that they are missing out on something, and they are,” said Callender, looking wistfully off into the distance. “There are no bad parts of the penis.”